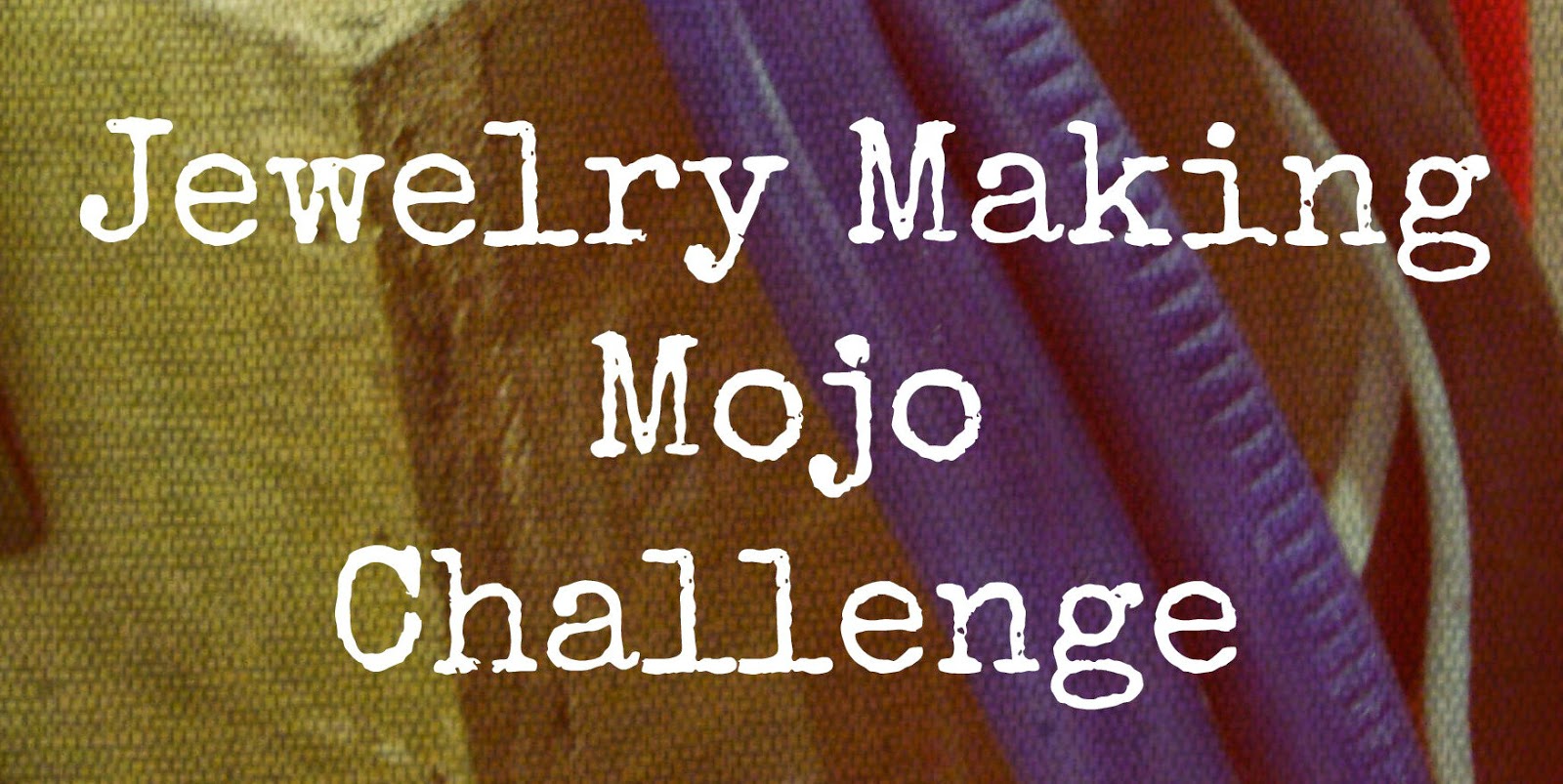 Over a year ago now (boy does the time fly!) I shared a post all about exploring color and color palettes.  You can check it out HERE.  Part of what I talked about was my tendency to shy away from mixing colors.  I think I've gotten much better, but it can still be a struggle to go outside my color comfort zone.

As I started thinking about colors and palettes that I find challenging, I was having a hard time deciding on a direction to go.  My husband suggested that I let him choose a picture from our recent trip and use that for my color inspiration.  This may seem totally crazy, but he really has a good handle on what colors I'm most and least comfortable working with so I went along with the idea.

In the end, he narrowed it down to a couple of pictures of tulips that he took at the Keukenhof Gardens right outside of Amsterdam.  I ran them both through the Adobe Kuler website and we decided that the picture and palette below was the winner.  Kuler doesn't save the source photo with the color palette (they actually call them themes) so I grabbed a screen shot to show them together.  That view doesn't do the photo justice, so I'm sharing the original too! 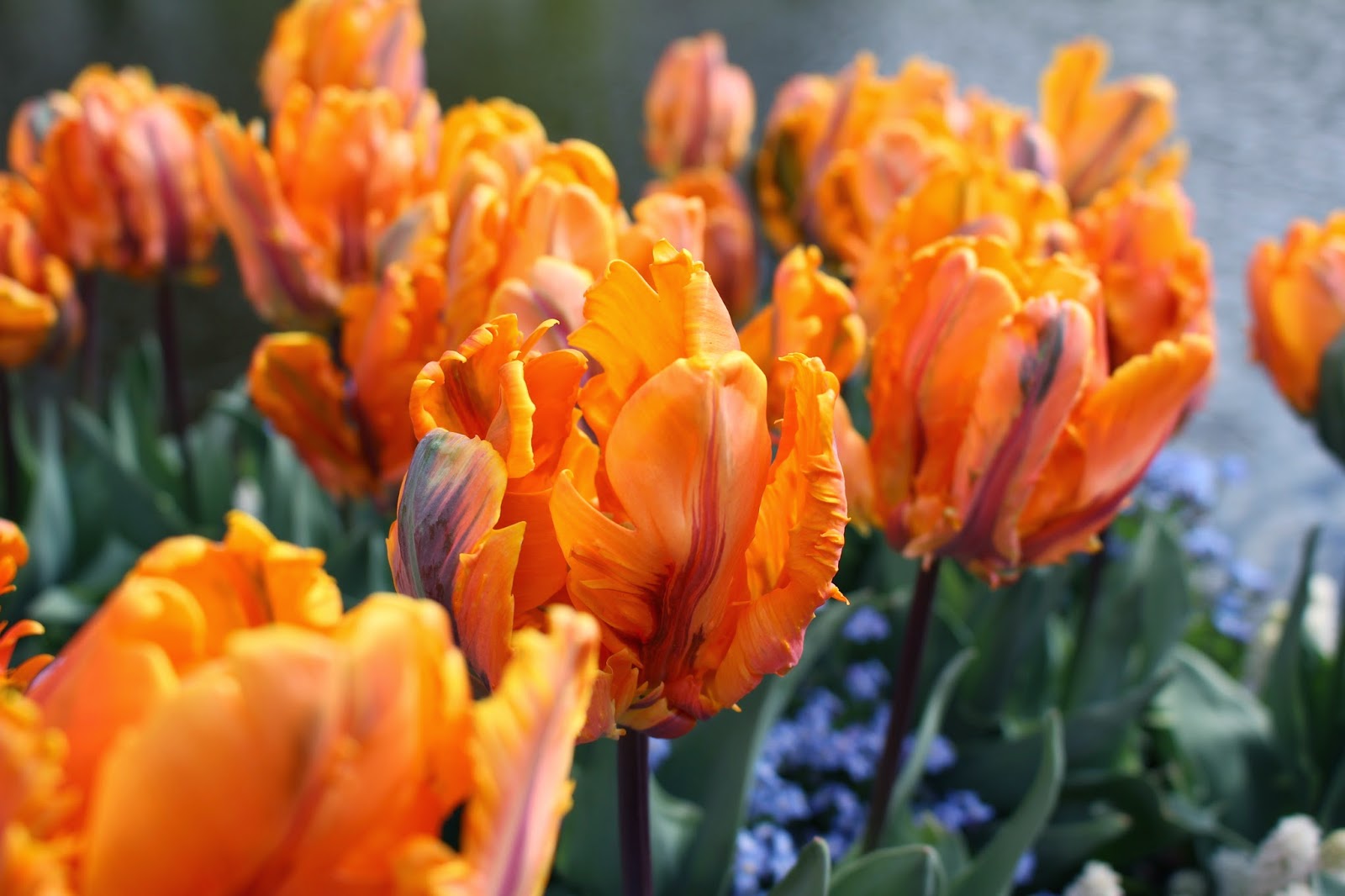 The yellow, orange, and red portion actually feels pretty safe to me.  Not exactly monochromatic, but still safely within a comfortable range of colors that just go together.  (See, I really need to learn my color theory so that I can better explain things like this... but that's for another day!)  For me, it's that purple-y blue that throws me for a loop.  I needed to work that into a design with the other colors and not have it look weird... challenge accepted!

I really thought the blue color in the palette was purple until I started pulling beads and comparing them to the Kuler screenshot.  It really is more of an almost cornflower blue.  Pulling possible beads in the oranges was the easy part but I did find a couple of possibilities to sneak in that little pop of blue.  I decided to maximize the orange idea by using copper at my metal.

To really stretch myself I chose some blue waxed Irish linen as my stringing material.  When I started out I thought I was making the front part of a necklace and that I would use copper plated chain at the back.  As I began knotting the beads (and thank you again Erin Siegel for helping me get over my fear of fibers!) I realized that it might just be a bracelet I was making!  (This makes me sound like a flake and a dork, but it's true.)  Here's what I ended up with. 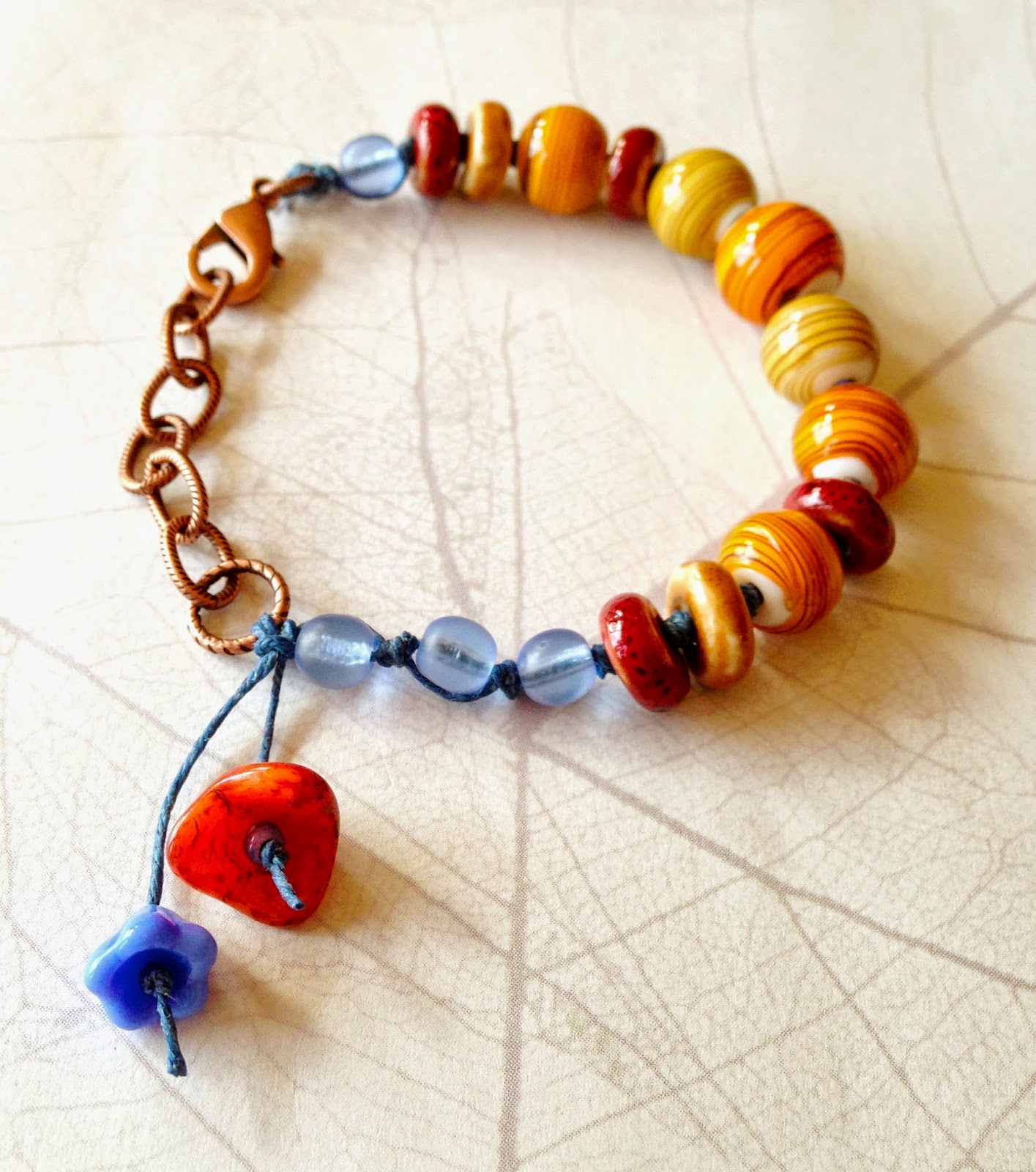 I really wasn't sure about the blue beads with the orange, yellow, and red... but it has grown on me.  I think the blue waxed Irish linen helps pull it together and the pops of blue make it feel special.

I'll admit that I made a couple of rookie mistakes... I cut the linen a little too short.  You'd think that with my experiences trying to be thrifty with wire (cutting it too short, and then having to start over wasting more than if I'd done it right the first time) that I would learn to cut way more than I think I need.  You would be wrong.  I cut two pieces about 16 inches each and that was not really enough with all those knots.  Thankfully, I had just enough to securely tie of the clasp end of things but it wasn't easy!

My other error, if you will, is that I would have done the flower dangles differently by putting them on the clasp end.  What I really should have done if I had realized I was making a bracelet would have been to cut one really long piece of cord and doubled it over with a lark's head knot on one end and the loose ends with the flowers on the other. Not a fatal flaw, just something I would have approached differently if I had know what I was making.  :)

You know I'm not a bracelet girl, but I may be coming around!  Other than the bracelet I made in Erin Siegel's class on the Bead Cruise (you can buy her tutorial in her Etsy shop for that one HERE) this is probably my favorite bracelet I've made.  Thank you Heather Powers for doing this awesome challenge and helping me push my boundaries!

Posted by Sarajo Wentling at 3:27 PM