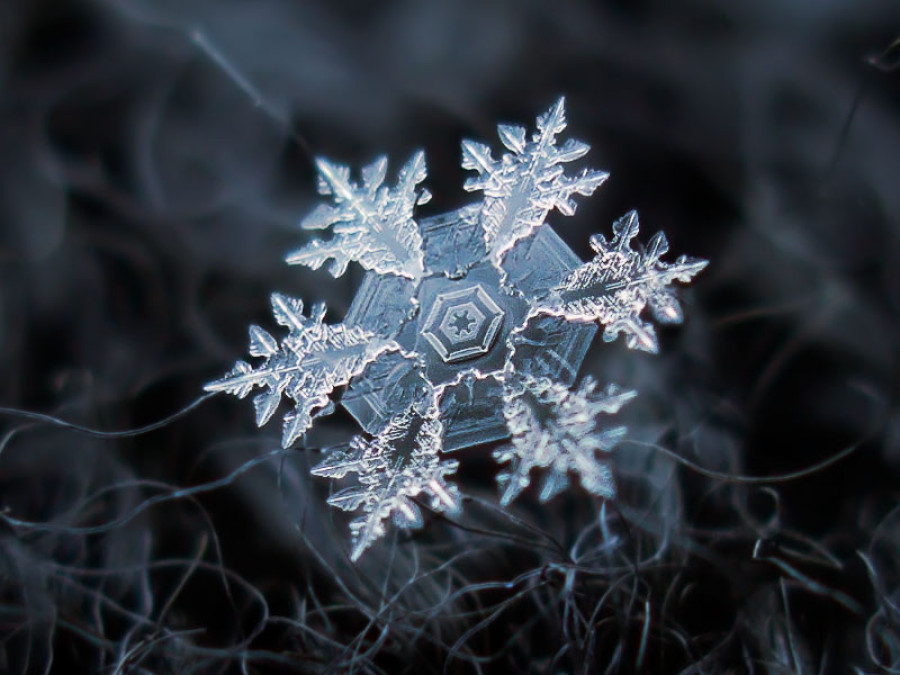 Fittingly enough for the crazy winter weather that has spread across most of the United States this month, Jennifer Cameron chose the theme of Snowflakes for the February Art Elements Theme of the Month.  Little did she know when she picked it...  While much of the country is getting rocked by the extreme weather, it's mostly just been bone chillingly cold here in Minnesota.  So, basically, business as usual!

It's pretty hard to design for Spring when you are in the depths of winter (at least for me!) so this theme was perfect for where my head was at this month.  Maybe after this round of designs both me and the weather will have the heavy snow and crazy cold out of our systems!  A girl can dream.

I was lucky enough to snag some gorgeous snowflake cabs from the talented Lisa Peters Russ at the end of last year.  This challenge gave me the excuse to play with a couple of them before the spring thaw... and I'm so happy I did.  I'm also pretty proud of myself for taking on a more ambitious project right out of the gate!

I started out with the big snowflake shield cab from Lisa (I had already glued that one and two smaller shield shapes down to backing) since I had an inkling of an idea for it.  Since the cab was sizable I wanted to play around with some vintage crystal components that I had picked up for just such an occasion.  It's hard to see in the picture but the large center element has two holes while the smaller side ones have just one center hole.  I used small clear silver lined seed beads to attach the crystal elements.  I played with a new to me technique for filling in the background at the top... a sort of random sewing down of one bead at a time.  As luck would have it, once I got the pendant all finished, I discovered that I had the perfect dyed silk ribbon to compliment it.  Such an easy and elegant solution for finishing the necklace! 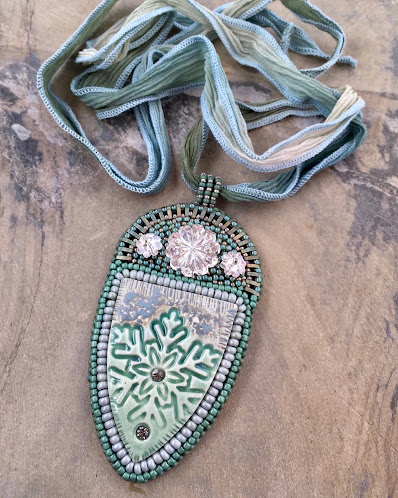 Still on a bead embroidery kick, I completed a second smaller snowflake pendant.  I just love Lisa's pieces!  Since this cab was a smaller scale to begin with, I did an extra row of beads around the entire thing.  For a fun, frosty affect I did a picot edge around the pendant with a nice grey pearly colored size 15.  I'm still not sure how I will finish it into a necklace, but that's a problem for another day! 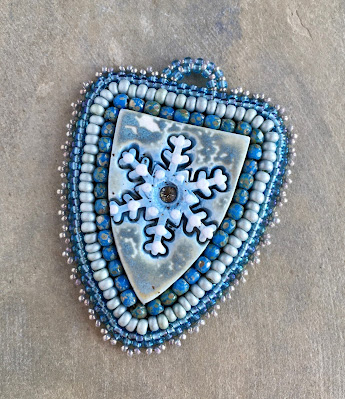 I was in the process of putting some new(ish) purchases away when I realized that the TierraCast charms I had gotten had a snowflake looking pattern on one side (the other is very much floral).  So I went digging through some other homeless supplies hanging out on (i.e. cluttering up) my bead table to whip up these sparkly snowflake earrings.  Hard to tell from the photo, but the bead caps are a snowflake pattern. 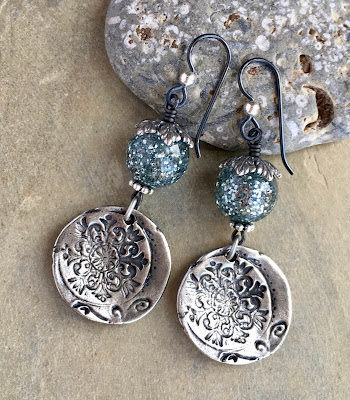 I still have some other snowflake goodies hanging out on my bead table, but the sun is out and I may opt for some tropical designs next!
Posted by Sarajo Wentling at 12:27 PM No comments:

2021 marks the sixth year that my husband Eric has been giving me a design challenge each month to get me out of my comfort zone and to help clear out my bead stash... The Honey Do List!  I know that I'm not the only one who loves a good design challenge, so I'm hoping folks will continue to play along with us! 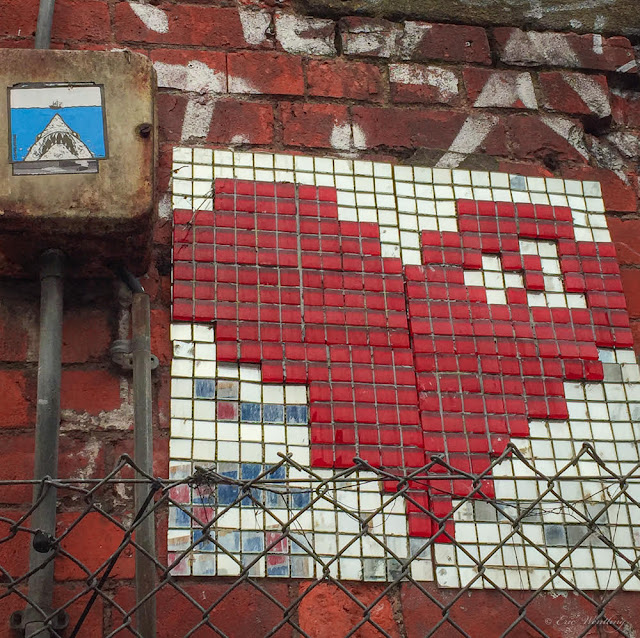 This was a cool 8-bit looking mosaic in London, along with some random graffiti and chain-link fence.  We saw a lot of cool street art on this leg of our England trip (pre-Covid of course) and this one jumped out at me.  This was taken with my phone, so not as great quality as some of my shots, but still fitting for February!

Honestly when I first saw Eric's inspiration for us this month I wasn't sure what I would have in me.  I had just made a bunch of Valentine's Day/Heart themed jewelry for a show my friends and did on Facebook the previous weekend.  I knew that I still had more hearts hiding in my stash (and, frankly buried on my bead table!) so I dug in and decided to get cracking right away!
First up, I went looking for some little heart shapes that Lisa Peters Russ had tucked in with one of my orders.  She gave me a fun red cork one and a grey fish leather one (that is the back of my pendant).  I wanted to do something bead embroidery wise with these but decided that the texture and fun metallic shiny bits showing through on the cork really didn't need any further embellishment.  The fabrics seemed too flimsy by themselves so I cut a smaller heart shape from a thin cardboard and glued in the middle of the two before sewing the brick stitch edge all around.  I think the way the edging beads look echoes the 8-bit style of the inspiration heart.  For added weight and interest I added a Czech glass teardrop dangle to the tip of the heart.  I kept it simple and just have plain chain at the back. 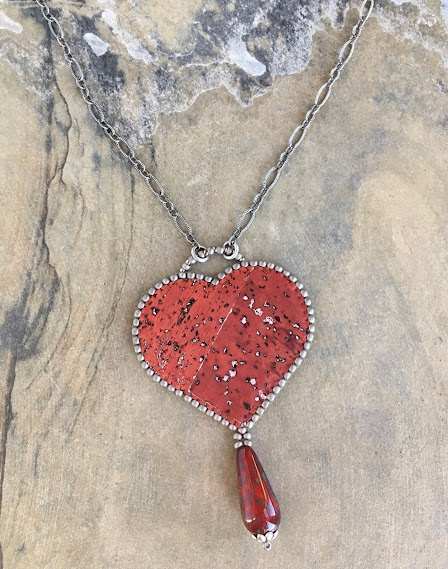 For the second necklace I played with a ceramic pendant with a flaming heart motif that I got in a mixed bead goody bag from Andrew Thornton in a destash.  (I don't know for sure who it's by... if you recognize the maker let me know!)  For as simple as my design actually is, it took a lot of playing with different beads and configurations to get it to where I was happy with it.  There's something about the teardrop beads flanking the pendant that makes me think of spread wings... especially when it's worn. 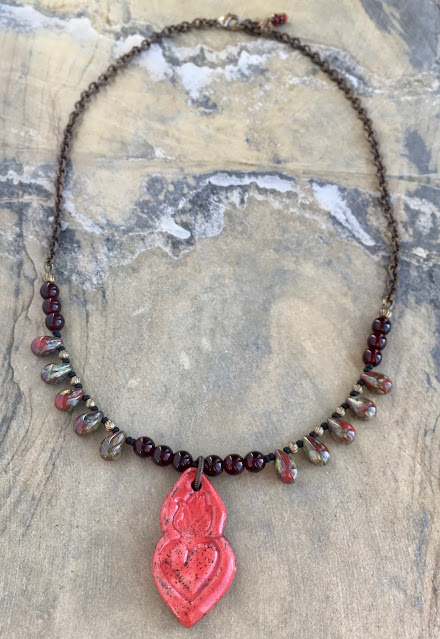 Apparently I was in a necklace making mood this month because I made a third one!  I got this sweet swirly ceramic heart pendant from Michelle McCarthy of Firefly Design Studio in the mail just in time to make one more design.  For once I used the accent beads that came along with the pendant... adding in some Czech glass and satin finish German resin and brass accents. 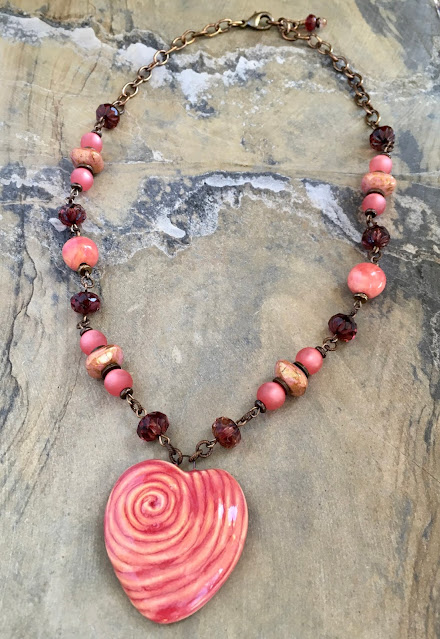 Now it's your turn!  Please add links to/photos of your own creations below.  I love seeing what everyone else is making too!  (I'm also really hoping that someone did something with the Jaws motif!) Check back on March 1st to see what Eric has in store for us next month!

You are invited to the Inlinkz link party!

Click here to enter
Posted by Sarajo Wentling at 5:38 AM 3 comments:

2021 marks the sixth year that my husband Eric has been giving me a design challenge each month to get me out of my comfort zone and to help clear out my bead stash... The Honey Do List!  I know that I'm not the only one who loves a good design challenge, so I'm hoping folks will continue to play along with us!

This was a cool 8-bit looking mosaic in London, along with some random graffiti and chain-link fence.  We saw a lot of cool street art on this leg of our England trip (pre-Covid of course) and this one jumped out at me.  This was taken with my phone, so not as great quality as some of my shots, but still fitting for February!

The reveal date will be Monday, February 22nd.  To make it super easy for you to participate and share your creations, I'll set up an Inlinkz link up so folks can add their blogs as they are ready.  Just stop by my blog starting on February 22nd and join the fun!  I'll leave the link up open for a while... so you have plenty of time to add your links.  (Last month's is still open... check it our HERE.) No blog?  No worries!  Feel free to send me a picture of your creation and some brief comments and I'll happily share in my blog post.  You can reach me at sjdesignsjewelry@gmail.com  The more the merrier, so I hope you'll play along with me this month

Posted by Sarajo Wentling at 6:31 PM No comments: