Inspired By Reading: The Forgotten Garden

It's been a little while since I've actually made something for the Inspired By Reading Book Club even though I've done some of the reading.  Suddenly the world has been turned on its head and I have much more time for reading and creating (in theory anyway.)

The March selection for book club was Kate Morton's The Forgotten Garden.  I had a good feeling about this book as soon as I saw the endpapers which featured one of Arthur Rackham's illustrations from an edition of Peter Pan.  (We actually bought a print of this very illustration when we were in York last summer.)  This novel involves a family mystery that spans three generations and two continents.  There's a foundling, a book of dark fairy tales, a secret walled garden, and more.  The story switches between the three time periods as the story and the mystery slowly unfold.  Things may tie up a little too neatly in the end but I certainly enjoyed the journey of getting there.  I'm curious about Kate Morton's other books... when the libraries are safe to reopen I'll have to see if I can check them out. 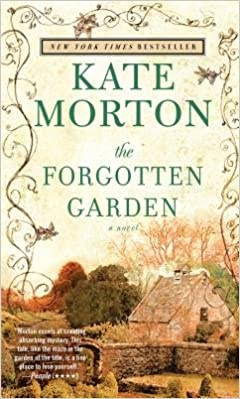 I honestly didn't think I'd manage to make anything this month... but, miraculously, I did!  I spent a good amount of time this past weekend trying to get at least a tiny amount of my insane bead mess organized and put away.  In the process of doing that, I unearthed a wonderful pair of faux tin charms by Heather Powers of Humblebeads that I snagged during one of Andrew Thornton's destash events.  These little fairies were perfect for a novel that featured an Authoress and her fairy tales so prominently!

As luck would have it, at the same time I found the charms, I also had one of my boxes of dark blue beads was also out on my table.  Some medium sized English cut Czech glass in a nice dark blue with Picasso finish jumped right out at me!  I then grabbed some small caramel colored rondelles that are great match for the tones in the fairy wings. 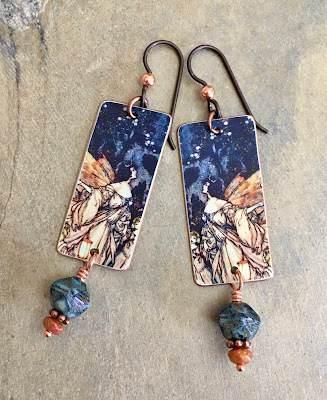 Ok,  I'm going to go curl up with the kitties and return to reading my current book, The Grammarians by Cathleen Schine.  Even though I have plenty of books on my shelves, I do wish that I had checked out a few more books the last time I was at the library.

It's been quite a while since I've played along with the Art Elements Theme of the Month challenges.  Life's just been a bit busy and chaotic.  Now in these unprecedented times of COVID-19 and the need for social distancing, I have no excuse to not find some time at the bead table and play along!  Plus, it was impossible to pass up Gnomes as a theme!

Much like our hostess, Jenny Davies-Reazor, I adored the book Gnomes by Poortvliet and Huygen.  I didn't have a copy but one of my sisters did and I would sneak into her room to read it.  (She wasn't all about the sharing with her little sister.)  I did have some little plastic gnome figurines though.  I still have them (see the picture I made Eric take below) but seem to have lost the mini version of the book that came with them.  It's probably around somewhere... possibly batted under a piece of furniture by naughty kitties. 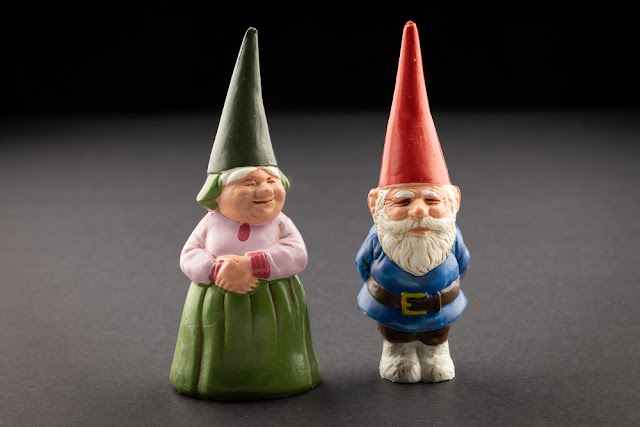 The first thing I grabbed to play with for this challenge was a pair of gnome earring charms by Blue Hare Art Wear.  I actually got these cuties as a gift with a purchase a while back.  I think they are just so stinkin' fun with their stylized design and those little red button noses!  I added some red fire agate and little turquoise crystals on top to go with the subtle stripes in their little hats. 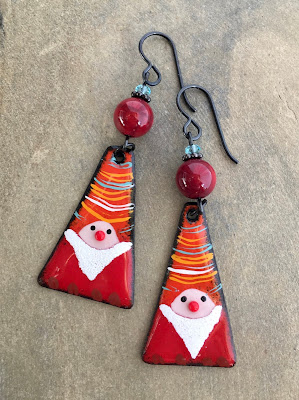 As luck would have it, right around the time this challenge was announced, my friend Heather Powers of Humblebeads did a special batch of woodland beads including her sweet little gnomes.  I knew I had to have one for this, and I was able to snatch one up!  I used the gnome as part of a charm cluster for a necklace, pairing him with some coordinating Czech glass flowers and beads.  Since the flowers were mostly blue, I wanted to get some more pops of red in the design so I added some links to one side of the necklace then balanced it with a bit of heavier chain on the other sided.  I'm pretty tickled with how this one turned out! 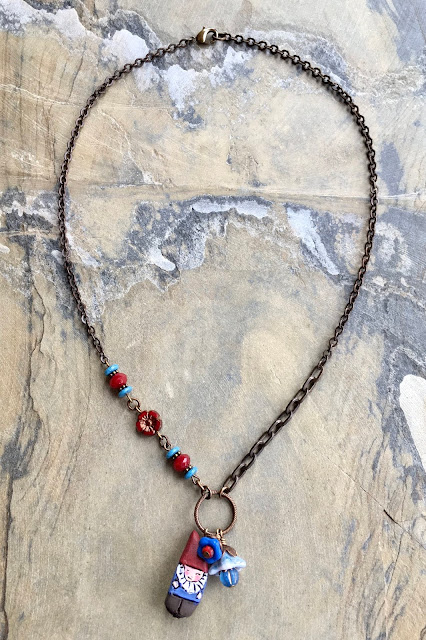 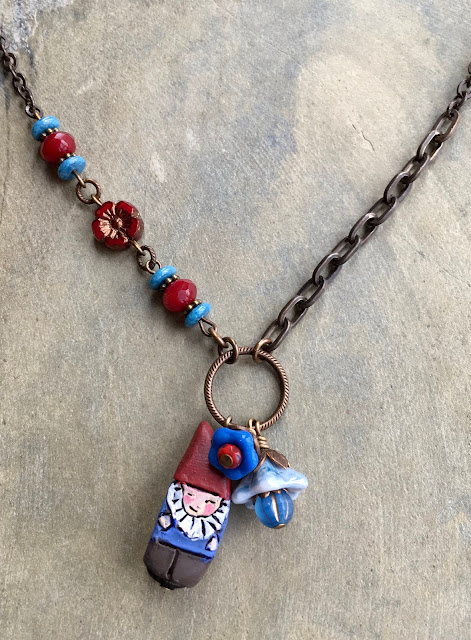 Ok, this last pair of earrings isn't directly gnome themed, but I could totally see some gnomies hanging out lounging under or on these cute little mushrooms.  Heather Powers also made these adorable polymer clay charms.  I paired them with some yummy red Czech glass that has a luster to its finish and tiny teal crystals.  The findings are all Vintaj Natural Brass and are nickel and lead free. 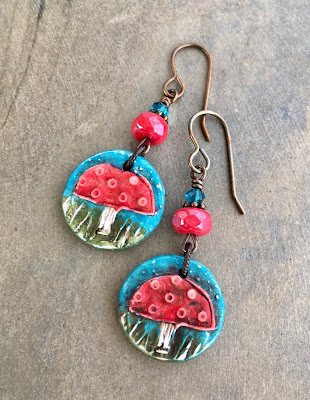 This is a blog hop!  Stop by and see what everyone else was inspired to make! 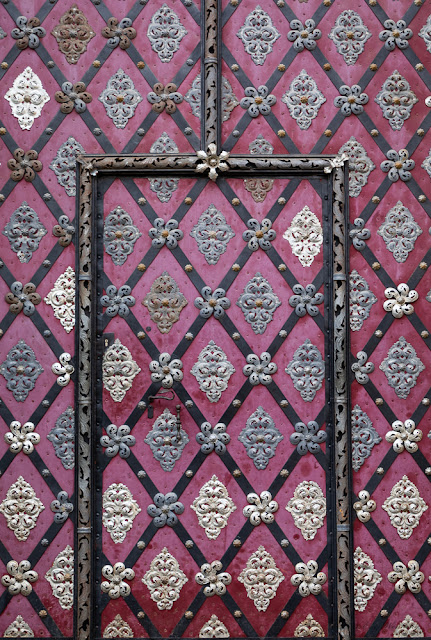 The very first thing that came to my mind when I saw Eric's inspiration photo this month was doing something with my collection of Vintaj Patina paints, metal blanks, and embellishments.  I started with two different shapes of brass altered blanks and gave each pair a slightly different texture with hammers.  If you look closely at the background of the door's surface in the photo you'll see some dimpling... I was trying to replicate that feeling.  Next I mixed up a custom blend of patina paints (using Garnet and Earth).  It's not perfect, but pretty close overall.

For the first pair I used some little flower shaped charms that I cut the loops off of and punched holes in the center for the rivets.  I thought the flowers resembled the round decoration on the door.  The dimpled texture on the brass blanks is pretty similar to what is on the door.  Pretty happy with how that part turned out!  Since the flowers have some dimension to them, they were a little tricky to rivet without flattening, but I did it by using the corner of my bench block.  I added some metallic English cut Czech glass and small plated hematite rondelles. 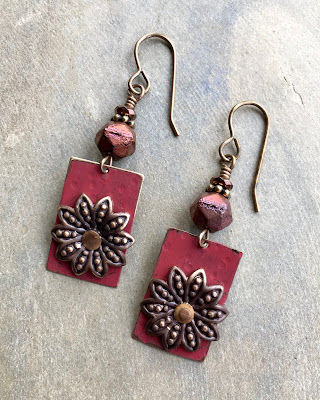 For the second pair of earrings I used more ornate brass blanks that I did an all over hammered texture before painted.  I used some small brass filigree pieces that are reminiscent of the diamond shaped decorations on the doors. 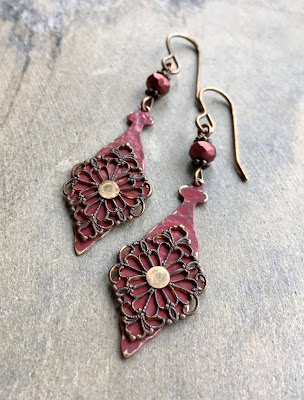 The first thing that I actually made for this month's challenge was another pair of earrings... this time making use of my oft-neglected Now That's a Jig!  The color and pattern on these fabulous enameled charms by Blue Hare Art Wear fit nicely with our inspiration.  I wanted to keep the focus on the charms so I kept it really simple.  I used annealed steel wire to make little "hangers" for the charms on my jig and then just hammered them to strengthen them.  I slipped on black niobium ear wires and I was done! 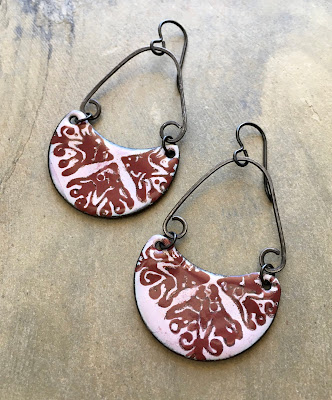 I didn't just make earrings!  I also pulled out some beads that I bought from Allegory Gallery in one of Andrew and William's destash events.  I got the focal and the Czech glass puff coins as a set.  I'm 99% sure that the lampwork bead is by Patti Cahill.  I'm honestly not entirely sure why these caught my attention for this challenge... maybe the deep reds in the Picasso finish glass coins... maybe the rings around the raised dots on the lampwork bead.  Either way, I just went with it!  Adding filigree rounds in brass tones help bring it together. 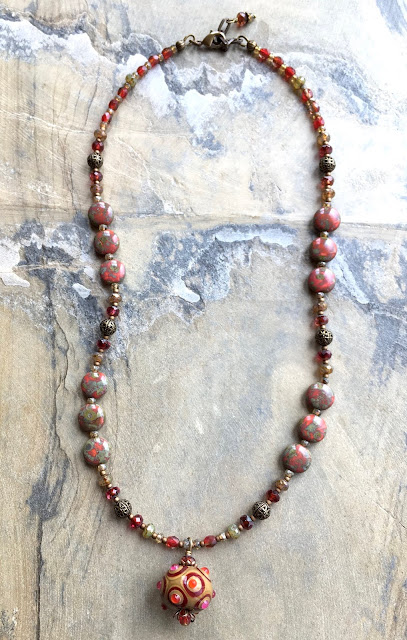 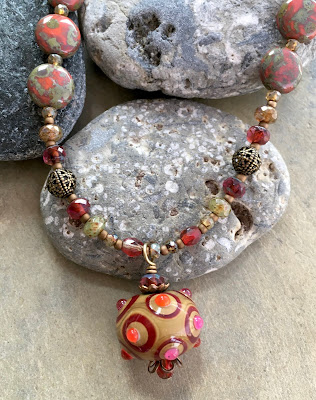 Not my creation (pretty obviously), I wanted to share these fancy sterling silver brooches from Portugal that belonged to my paternal grandmother.  The patterns in the petals reminded me of the look of the metal door decorations.  I just had to share! 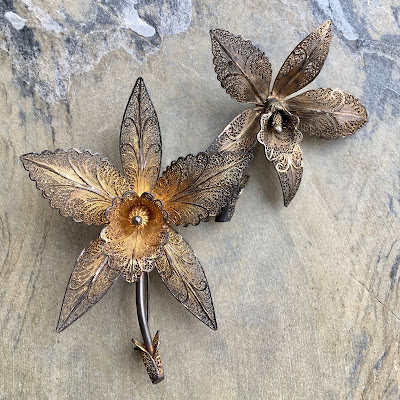 My friend Anna Pierson of Saga Hus doesn't blog so she sent me a picture collage of what she was inspired to make this month.  Isn't this a fun mini-collection of earrings?!  I think my favorites are the asymmetrical pair. 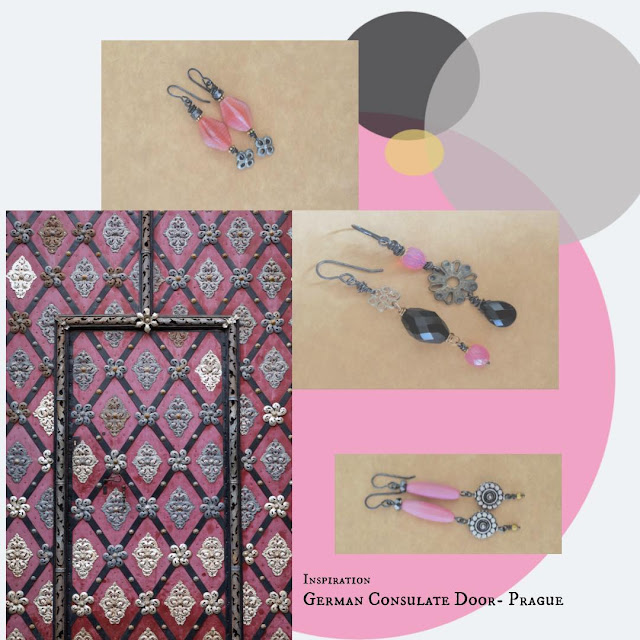 Now it's your turn!  Please add links to/photos of your own creations below.  I love seeing what everyone else is making too!  Check back on April 1st (no foolin'!) to see what Eric has in store for us next month!

You are invited to the Inlinkz link party!
Click here to enter

Posted by Sarajo Wentling at 6:14 AM 3 comments:

The reveal date will be Monday, March 23rd.  To make it super easy for you to participate and share your creations, I'll set up an Inlinkz link up so folks can add their blogs as they are ready.  Just stop by my blog starting on March 23rd and join the fun!  I'll leave the link up open for a while... so you have plenty of time to add your links.  (Last month's is still open... check it our HERE.) No blog?  No worries!  Feel free to send me a picture of your creation and some brief comments and I'll happily share in my blog post.  You can reach me at sjdesignsjewelry@gmail.com  The more the merrier, so I hope you'll play along with me this month!
Posted by Sarajo Wentling at 9:00 AM 1 comment: