The Infinities - Inspired by Reading

So, it's time for another installment of the Inspired by Reading Book Club!  You can find out more about the group and see the reading list for the year over on Andrew Thornton's blog HERE.  We are always looking for more folks to play along.  You don't have to make jewelry either, any creative response is welcome!

August's selection was The Infinities by John Banville.  This book was a real challenge for me to make my way through.  In the course of 273 pages, you spend one day with a dying man named Adam, his family, their staff, and a few visitors and onlookers.  The narration of the story is confusing... it jumps from the dying, comatose man and Hermes.  Yes, THAT Hermes, also known as Mercury, messenger of the Olympians gods and the god of travel, roads, merchants, and thieves.  Another role Hermes played in Greek mythology was conducting mortal souls into the afterlife... and I'm assuming that's a big part of why he is watching over the family in this book.

Back to the story, though.  During the course of the book, nothing much really happens.  We get some of Adam's back story through his memories as he lies helpless in his sickbed and the gods mess around with various characters...but there is no real plot.  As I finished the book I couldn't help but wonder what was the point.  I don't want to spoil anything, but it just felt like the last chapter was spent hastily wrapping things up and saying "yup, the gods have watched you all and interfered but now they're going to make it all better...the end."

While I didn't find much to inspire me in the actual writing, I latched onto the idea of Hermes as a focal point pretty early.  I bought a filagree with a stamp under resin from Andrew Thornton.  I couldn't make out the details of the stamp on the tiny screen of my phone, but when it arrived I discovered that it was Hermes!  Divine intervention?  Maybe! 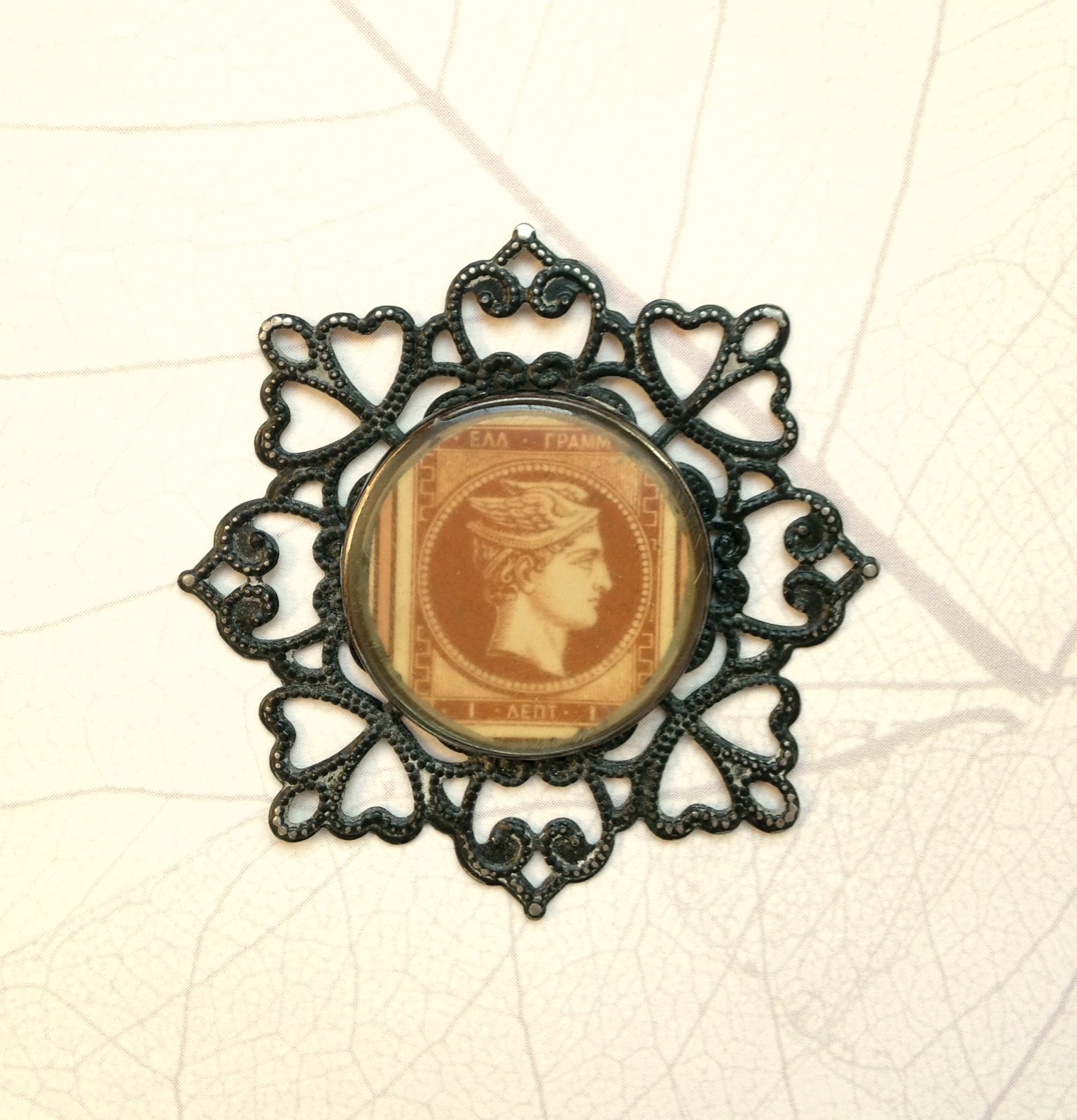 While I didn't really like or "get" the story, the last couple of chapters did give me some colors and imagery to work from.  Helen's sky blue dress and gold sandals, Petra's jade-green kimono, the red lining of Petra's razor box, the red satin pillow that the dog Rex had chewed, the clouds and rain, the green grove.  Ok, that's a lot of different colors, but I was determined to make something work!

I ended up focusing on the pale blues, deep reds, and some earthy tones to go with the color of the stamp.  I used a little hook and jump ring for my clasp, adding in some little wire wrapped teardrop labradorite pieces that made me think of the rain storm and a leaf charm for the woods.  While I mostly used Vintaj arte metal in this design, I did throw in a tiny bit of natural brass for extra interest. 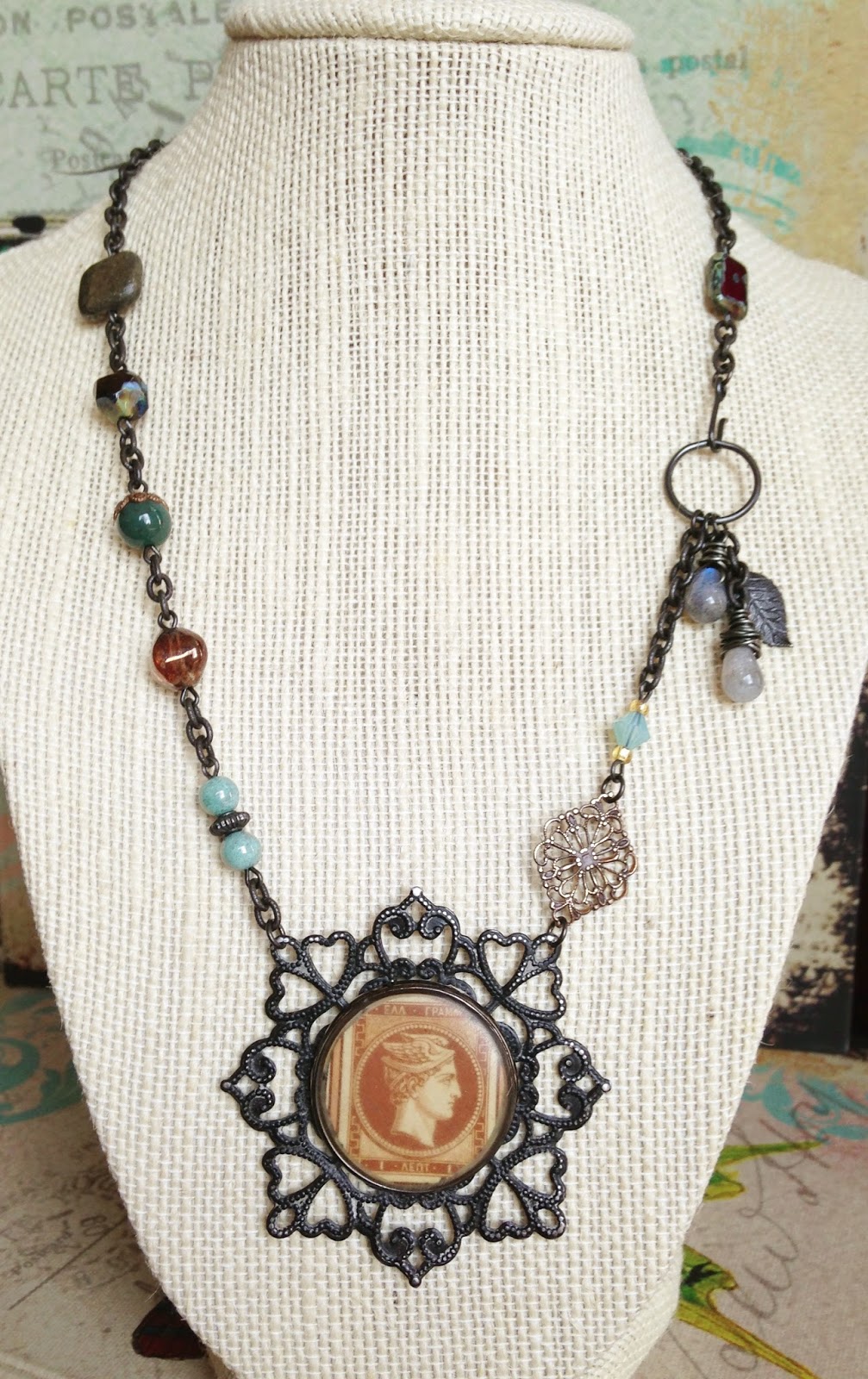 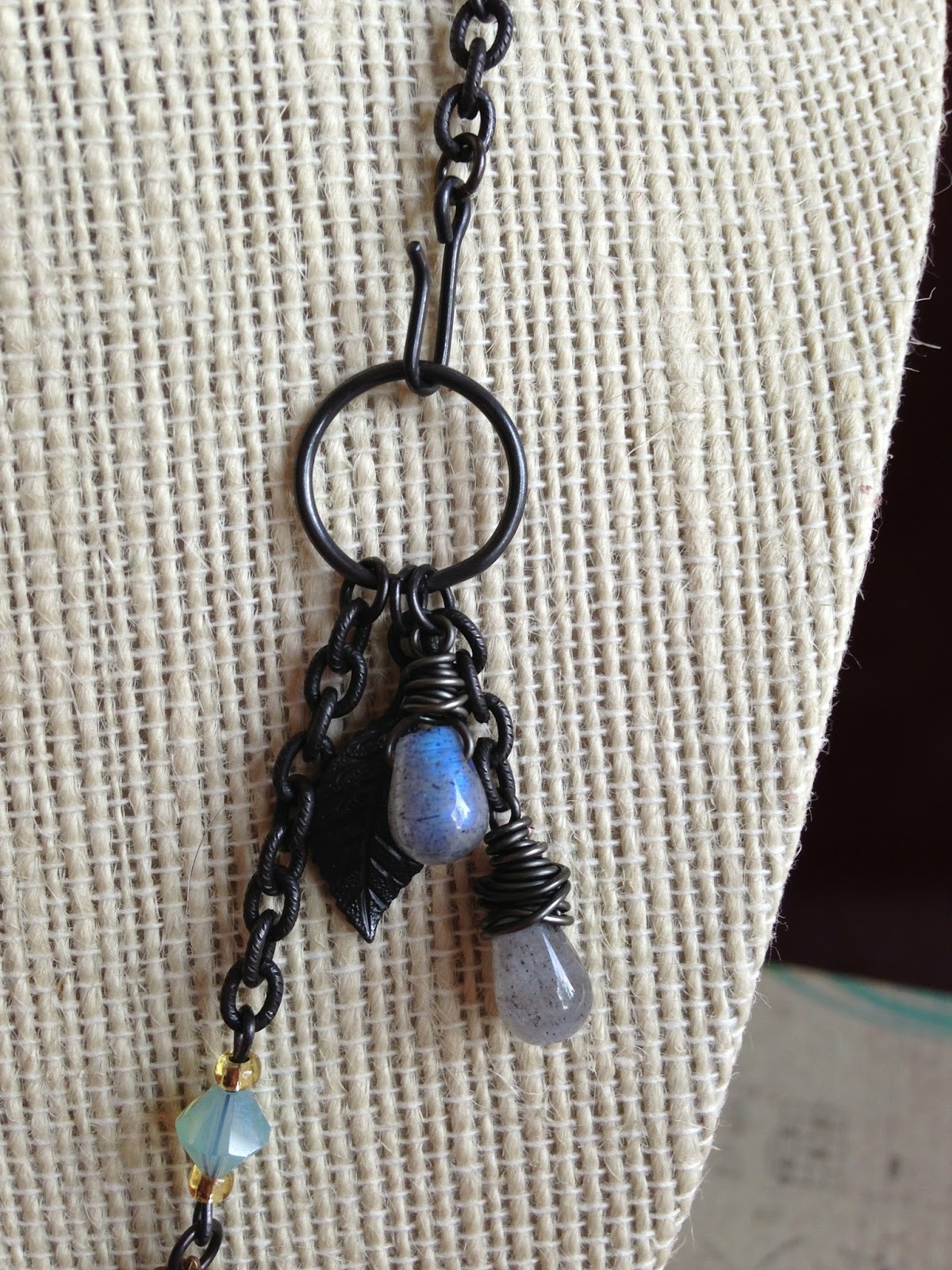 Considering my lack of love for the book, I'm pretty darn happy with the end result for my design.  Thanks for stopping by... Please take some time to check out what the rest of the participants created this month too!

Posted by Sarajo Wentling at 5:53 AM 3 comments:

Happy Sunday everyone!  It's time once again for the latest installment of the Art Jewelry Elements Earring Challenge.  Participants are challenged with making one new pair of earrings each week that feature artisan made components.

This time my two pairs are very much variations on a theme.  I bought two sets of these great porcelain petal earring pairs from Nancy Schindler of Round Rabbit.  I was a little nervous when I bought them due to their size.  I was worried that they would be too heavy for earrings, but decided that worse case scenario would be that I would have four pendants.  I need not have worried, when I opened my package of goodies from Nancy I was surprised by how light they were...hooray!

So often when I buy beads, I do so without any clear idea of how I will use them.  (I'm not the only one who does this, right??)  Well, not this time!  I knew exactly what I wanted to do with these lovely petals.  I saw in my minds eye little dangles with Vintaj brass foliage bead caps and Czech glass rondelles.  So, without further ado, here they are!

The first pair features some yummy raspberry colored glass beads.  It's a little hard to see the clear color in photos, but it works nicely with the crackle turquoise and red glazes on the porcelain.  I went for some contrast instead of my usual monochromatic leanings.

Pair number two feature the petals in English blue and mango glaze.  Yummy!  This time I went for more of a straight match with some Pumpkin Sky Czech glass beads from Lima Beads.

Necklace for a Friend

Part of what I love about going to the American Library Association's conferences every year is seeing friends both old and new.  My group of friends from grad school always gets together for dinner and catching up at least one night during the trip.  Now that I've been making jewelry for a while, my girlfriends will bring me things that need fixing or reworking and sometimes beads or findings as gifts.  It's kind of fun to be considered something of an expert on something!

When I was in Chicago for the Annual Conference, my friend Amy B. entrusted me with a necklace that she had just bought herself for her birthday.  It was a lovely carved jade dragon pendant but she didn't like the cord that it was on.  I was excited to try my hand at turning this pretty pendant into a necklace that I hope Amy will love wearing for years to come.  Here is where it started... I darkened the picture a bit so you could see the dragon better. 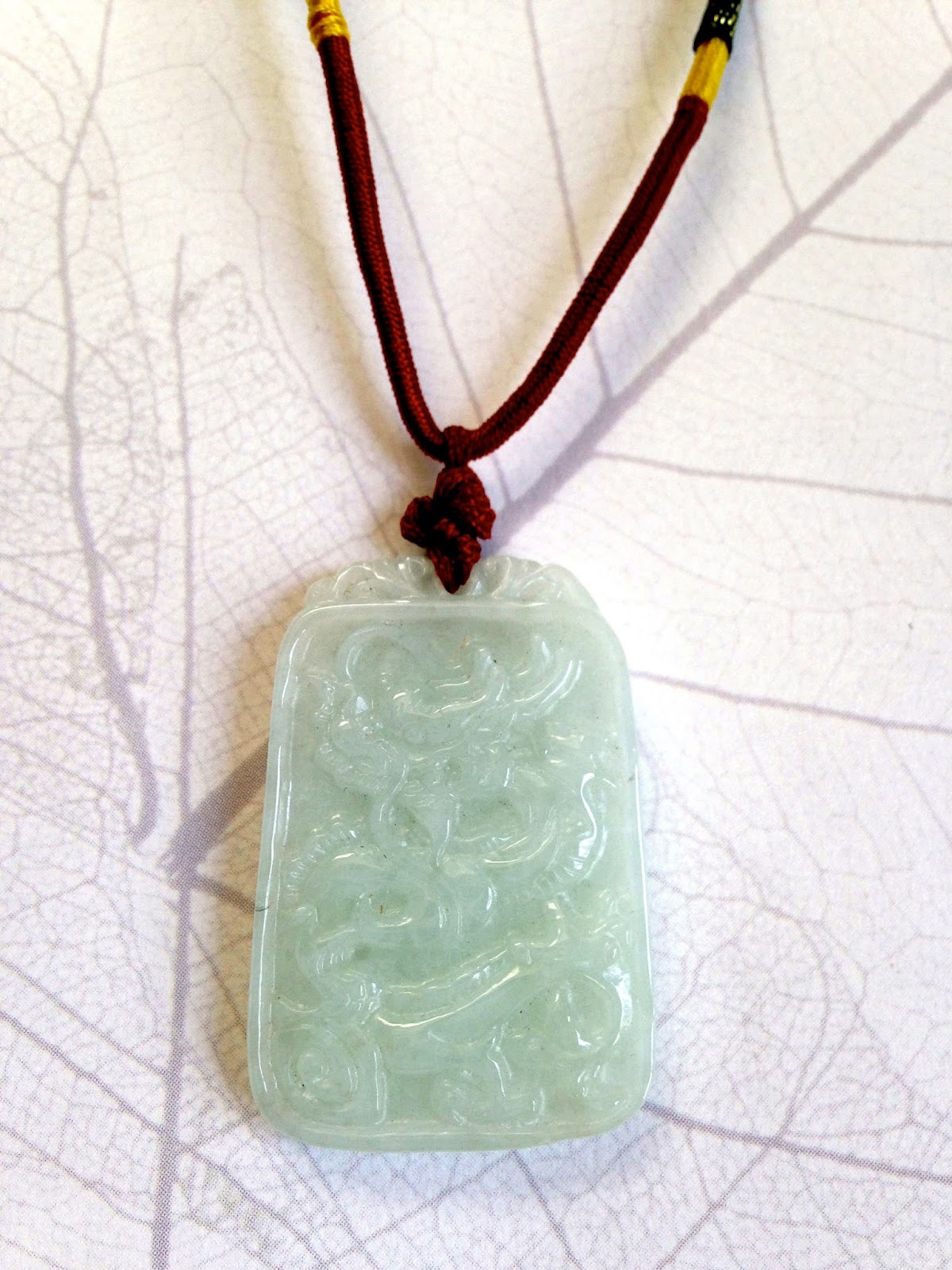 I immediately knew part of what I wanted use in the design.  I've had some little carved jadeite flower beads in my stash for ages and I thought that they would be a great compliment to the pendant.  Some pale, rectangular aquamarine beads also made their way into the design along with Vintaj natural brass chain, beads, and findings.

I wanted to keep things relatively simple and symmetrical to keep the focus on that gorgeous pendant.  Here is the finished product... my fingers are crossed that Amy loves what I've come up with! 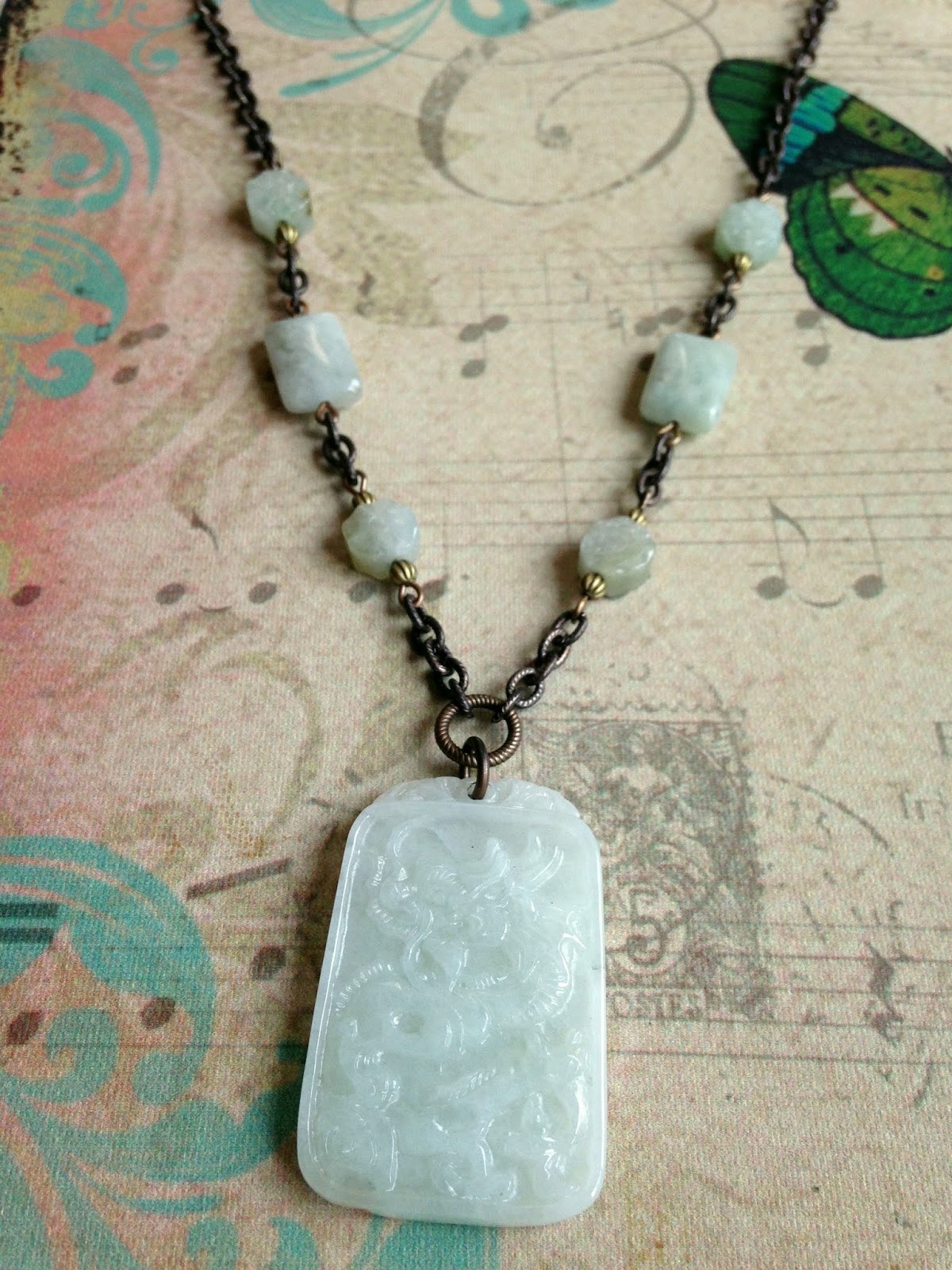 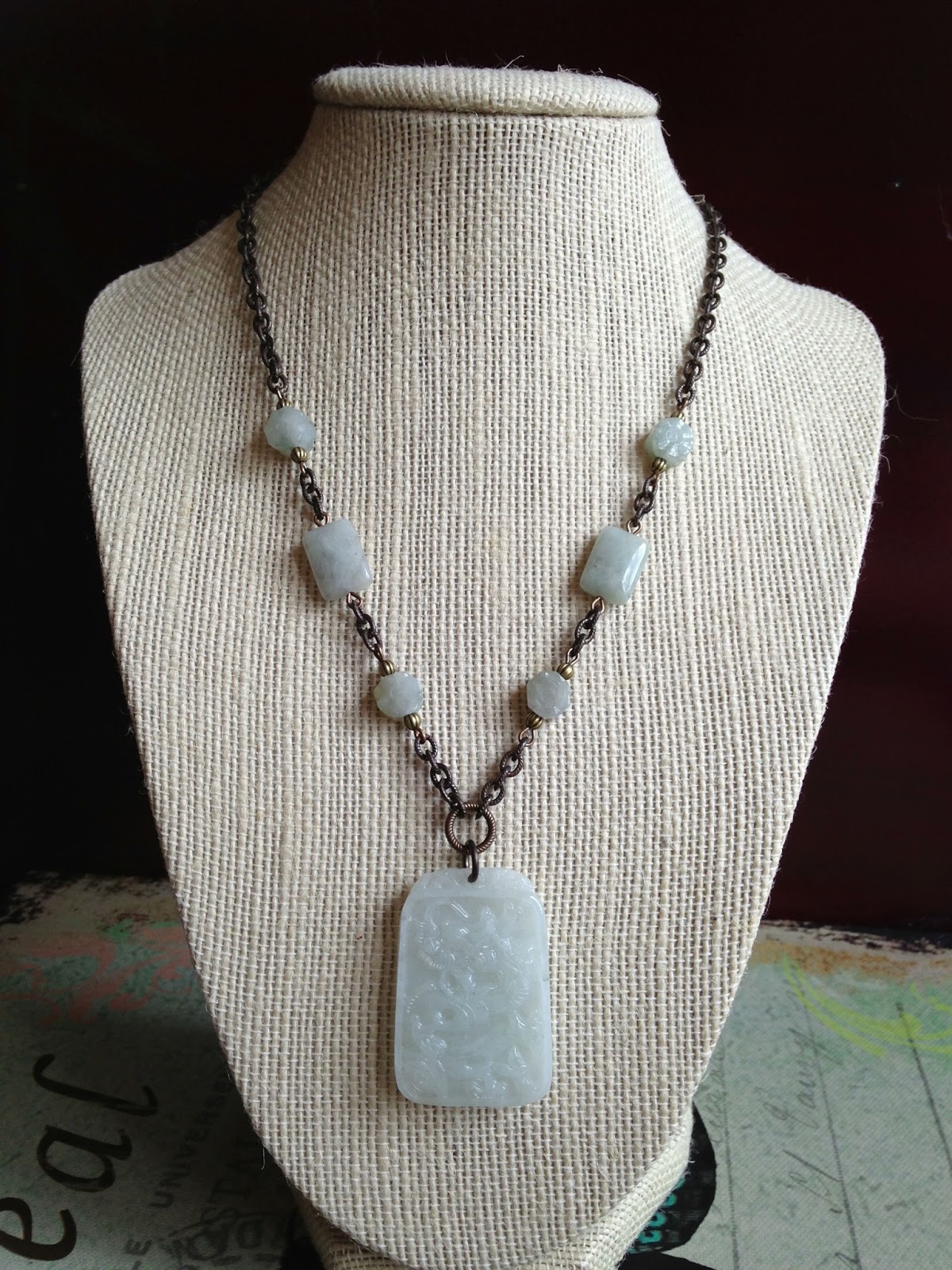 I also whipped up some little earrings to go with the necklace to make it a complete set. 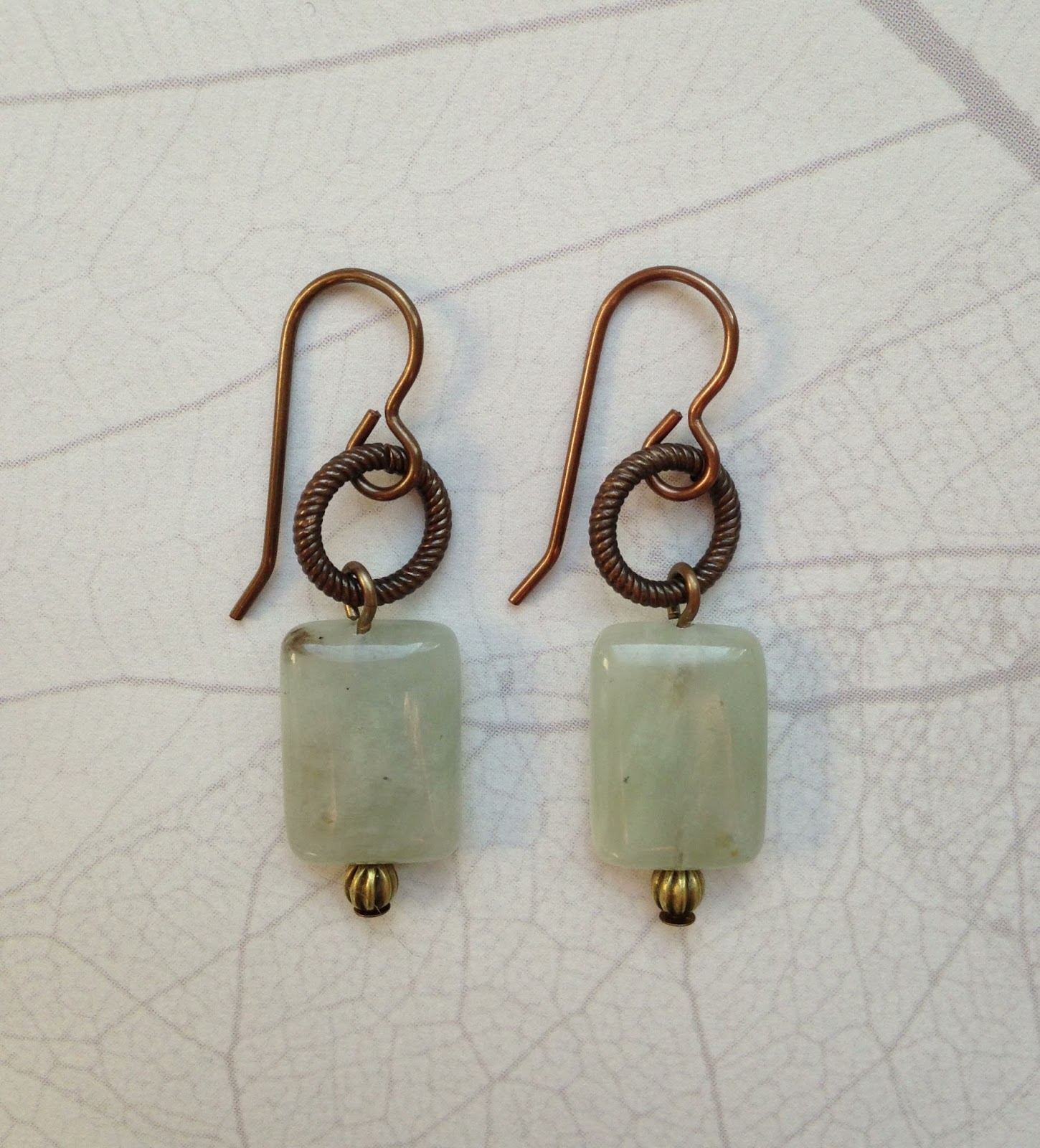 Posted by Sarajo Wentling at 8:05 AM No comments:

So, I've been pretty quiet on the blog front lately so I thought I'd do a little update on what I've been up to.  The last twelve days or so have been pretty much consumed with attending the Minnesota Fringe Festival.  So what is Fringe, you say?  It's an eleven day performing arts festival that takes place every year at the beginning of August.  It's unjuried so shows get chosen by blind lottery.  You can see everything from drama, to comedy plays, to stand-up comedy, to dance, to shows that leave you wondering, WTF?


For the last few years Eric and I have bought Ultra Passes for the Fringe and have seen as many shows as we could manage.  Our all time high has been 42, but we logged a very respectable 40 this year... not too shabby!  All the shows are an hour or less, so don't be too impressed.

We saw some amazing, creative, moving, and funny shows this year.  And out of our 40 shows, there were only 4 that we really didn't enjoy. Twin Cities folks, if you enjoy watching live theatre or dance and are willing to try something new, I highly recommend that you try out the Fringe Festival next year.  Hit me up for recommendations if you want... I'm always good for an opinion!

This year we had a special treat... my niece Anna came to visit us for a couple of days and was willing to go see lots of shows with us while she was here.  We took her to 11 shows over two days!


Having a guest also led me to go someplace that I'm ashamed to say I'd never visited before in my 13 years in the Twin Cities... Minnehaha Falls.


Posted by Sarajo Wentling at 7:18 PM No comments:

Happy August, everyone!  Can you even believe how fast this summer has gone by?  I really can't.  Before we know it school will be back in session and temperatures will be starting to cool off.  I'm not ready for that yet, so one of my pairs of earrings this time is all about capturing the last of our sunny days...but more about that in a moment.

It's time again for another reveal in the Art Jewelry Elements Earring Challenge.  For those of you who may be stopping in for the first time, the challenge is to make one pair of earrings a week using artisan made beads.  As much as possible I've been trying to highlight one artist for each reveal.  This time, I'm featuring fun porcelain beads from Diana Ptaszynski of Suburban Girl Studio.  I just love Diana's work and am thrilled to show off her fun earring charms!

First up is a pair I'm calling "Hibiscus Lemonade" for the fun floral pattern in yummy yellow and pink.  I paired the charms with some pink cracked quartz that I bought when I was out in Bend, Oregon back in June.  Mixed with Vintaj brass wire and earwires, I think that these make a perfect summer treat!


My second pair combines charms in a glaze Diana calls rootbeer that is a great combination of browns that range from caramel to almost black.  For this set, I added in some fluted, black agate beads that I've been hoarding forever.  I used Vintaj copper wire and copper-plated jump rings from Nunn Design to round out the look.  These are a little bigger than the earrings I tend to make, but not too crazy!

Both pairs are currently for sale in my Etsy shop.  Click HERE to check it out.