My Mother She Killed Me, My Father He Ate Me - Inspired by Reading

Continuing my rash of late month design challenge reveals, it's time to share what I made for the latest installment in the Inspired by Reading Book Club!  You can check out more info about the group (you read the book and create something, anything) over at Andrew Thornton's blog HERE.  This month's book was My Mother She Killed Me, My Father He Ate Me, a collection of new stories inspired by fairy tales and edited by Kate Bernheimer.

I have been entranced by fairy tales since I was a little girl, so this book was right up my alley.  Two of my earliest book memories involve collections of fairy tales.  The first was a Little Golden Book called The Blue Book of Fairy Tales that belonged to my big sister Kathy.  I was thrilled by the dark artwork and a bit terrified by it actually.  (Seriously, look at that witch on the cover...she's scary!)  It made such an impression on me that as an adult I spent years combing used book stores and garage sales looking for a copy of my own...and I eventually found one!

My other early fairy tale memory was devouring the stories in a big fat collection from Readers Digest that my grandparents gave me for Christmas one year called The World's Best Fairy Tales.  That volume introduced me to many new tales as well as the non-Disneyfied versions of stories I already thought I knew.

As I've grown older, I've developed a notoriously short attention span when it comes to short stories.  Despite that, this collection really held my attention and imagination.  I only managed to read about 12 of the stories and I was sad that I needed to move onto other things since there were still tales between this book's covers that I was interested in reading.  Perhaps I'll check it out again someday, but then again, there are always stacks of new books I want to read!

I mostly tried to read stories based on tales that I was less familiar with and authors that I have enjoyed in the past... I'm not sure why this is the strategy I took, but there you have it.  In the end, I decided to go with an idea from the first story I read, "Catskin" by Kelly Link.  I started there because I had read and liked a collection of dark stories by her called Pretty Monsters and was unfamiliar with the inspiration tale.  (Oh, and I like cats...true confession time!)

Lots of good elements to work with here... witches, poison, cats, strange "children," and more.  Not surprisingly, I found this story unsettling and creepy.  While Mother's Revenge, the main cat in this story, was not black like the focal I chose, I decided this pendant from Earthenwood Studio still worked since this could be her silhouette with eyes glowing in the moonlight.  I kept things pretty simple for my design, just adding some Czech glass that has some bronzy sheen, rectangular bronzite pieces, and Vintaj brass chain and findings. 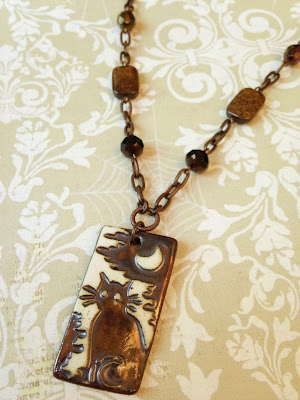 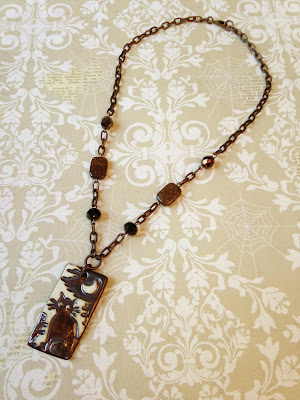 I also whipped up a pair of earrings based on the same story.  I was a little fascinated (and horrified) by how Mother's Revenge directs Small to lock all of the witch's cats inside her house and burn the whole thing down.  The next morning when the fire is out, Mother's Revenge retrieves bundle after bundle out of the ashes... catskins that no longer have cats inside.  And from the catskins fall golden coins that were "sloppy, slippery with fat."  Ok, totally gross, but that's the inspiration for these pretty little earrings made from pearls and gold filled findings.  I think I found the perfect prop for them! 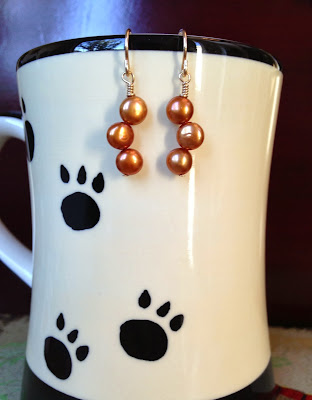 As always, thanks to Andrew for thinking up and hosting this great book club.  One of these days I'm going to plan ahead and take a little mini-vacation for the in person meet up!  For now, I have to settle for checking out what everyone else made virtually... I hope you'll take a peek too!

Halloween has always been one of my favorite holidays, so I just couldn't resist joining in the fun when Diana Ptaszynski from Suburban Girl Studio put out the call for a blog hop around Halloween and/or Day of the Dead!  Part of her challenge was to include at least one art bead in each design.

When I think Day of the Dead, I think sugar skulls, flowers, and bright colors.  I originally wasn't as focused on the Day of the Dead aspect of the challenge, but I knew I had some Green Girl Pewter sugar skulls (and other skulls!).  When I started looking at my art beads, I found that I was draw to a super bright and fun lampwork glass bead by Beadygirl Beads and I thought it would work great with the pewter.  I added in some other colorful lampwork beads from The Spacer Bead Shop and some Vintaj arte metal chain and other blackened pieces, and here's the result! 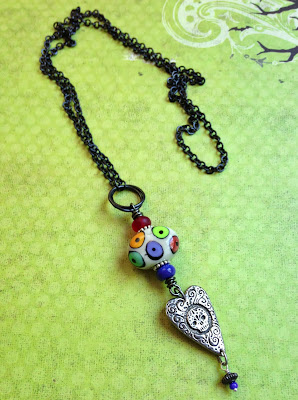 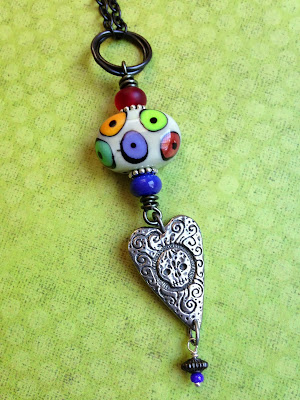 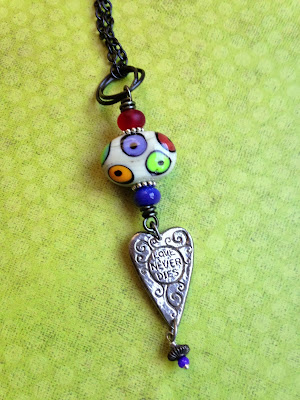 I got so excited by the Green Girl skull pieces that I had that I decided to make a second Day of the Dead necklace.  This time I used some faux cinnabar, lampwork lovelies by both Tanya McGuire and the Spacer Bead Shop, and a silver plated ring by TierraCast.  I used Vintaj arte metal wire for my links again, but this time used silver plated antique silver chain from Nunn Design. 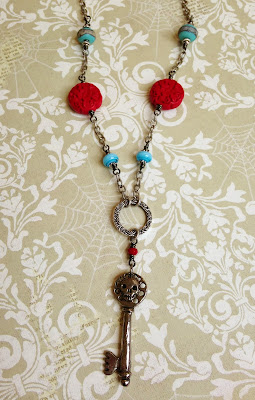 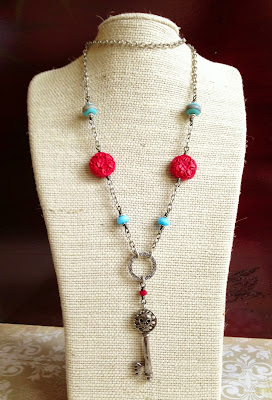 I'm not 100% sure if these designs count as art beads, but I'm going to include them anyway.  I had some fun with some subtly seasonal scrapbook paper and some copper plated bezels.  I love the way this spider set turned out!  I had hoped to get some other Halloween themed things done, but my travels this month got in my way. 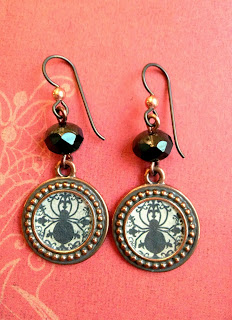 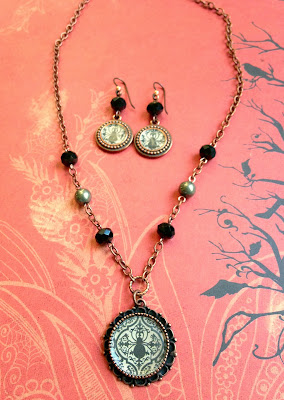 Big thanks to Diana for thinking up and organizing this fun blog hop!  All of these pieces are available in my Etsy shop.  Click HERE to check it out.

You can see all the other great jewelry that my fellow participants made too, please consider hopping around to see everyone's great stuff!

Wow, this year keeps on flying by!  It's time for the Art Jewelry Elements Earring Challenge once again.

It's the end of October and fall is officially in full swing.  To celebrate my favorite season, I thought I'd share a couple of pairs with a fall theme.

For the longest time I kept trying to cut a perfect one inch circle to put in my smaller bezels.  Why?  I have no idea...cutting circles is super hard!  I finally took the time to find the correct sized punch for those little buggers and now am having some fun with the TierrCast bezels that have been in my stash for quite some time.

For both of these pairs I cut some fun fall scrap booking paper with my new punch and then poured in UV resin over the top (after sealing everything, of course).  The orange leafy pair sold at the Art Wander, but I've added the pumpkin pair to my Etsy shop.  You can see the listing HERE.

Posted by Sarajo Wentling at 6:51 AM 3 comments:

Oh fall, how I love you!  (Even if your arrival means the long, cold winter is heading our way.)  This month's Art Bead Scene challenge really captures the feeling of late October to me... I think it's a combination of the muted colors (very different from the brighter fall hues of last month's challenge) and the owl and moon imagery (which make me think Halloween).


To find out more information on the artwork and the artist who made it, click HERE.  I love how cranky the owl looks... perhaps he's annoyed that he's been disturbed in his hunting!  When I saw this piece, I immediately thought of the "Sweet Owl" bead set that I had bought from Gaea a while back. 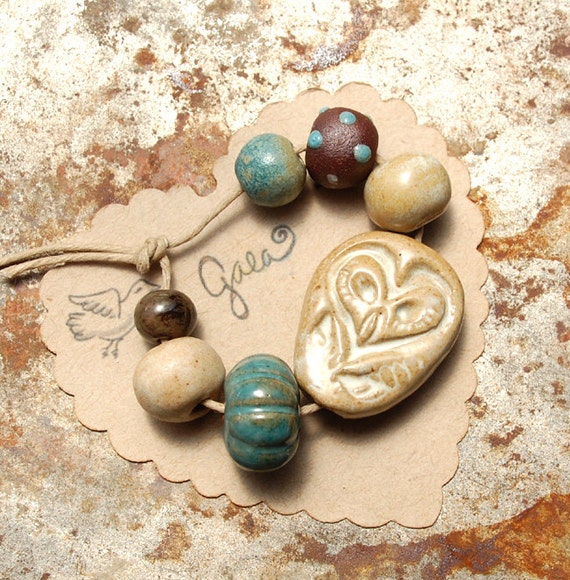 I decided to use most of this set in my design along with a couple of natural stones... a really cool piece of black agate and a red creek jasper round.  Because of how much grey is in the palette, I used Vintaj arte metal wire to make the beaded links.  The copper elements, including that cute little gingko leaf from TierraCast, pull in the warmer tones from the palette. 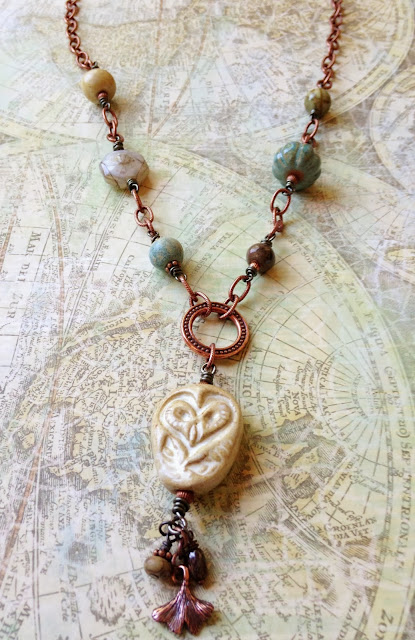 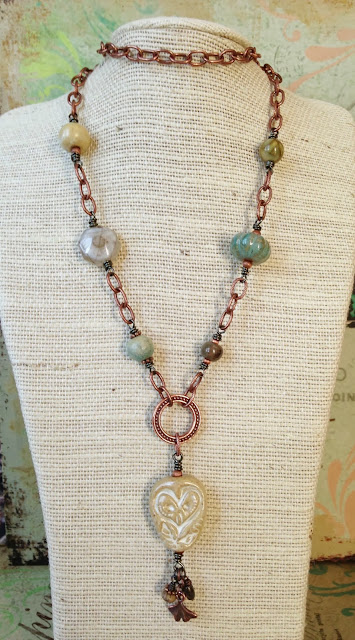 I've been pretty quiet since the Art Wander wrapped up since my husband and I have been off on a road trip to the South.  But I'm back now and the rest of the month should bring more posts from me as I attempt to get three design challenges completed.  (Hopefully the supplied I need for a couple of them have arrived while I was gone!)

But for now, you know what time it is, don't you?  Time for earrings, earrings, earrings! It's once again time for the Art Jewelry Elements Earring Challenge reveal.  The goal is to make one pair of earrings each week that features an artisan made component.

Once again this week I'm showing off two pairs with components designed/created by me, Sj Designs.  (I promise I'll be back to highlighting work from other artists soon!)

My first pair is all about copper and turquoise.  I etched a pair of copper blanks from Vintaj and worked turquoise paint into the grooves.  I did a little doming action, sealed them, and added these great chandelier cut Czech glass beads to finish things off.

My second pair is a variation on a pair a made a while back in Week 16.  This time I went for a bolder color scheme with the turquoise and red.  I started with Vintaj brass circle blanks that I embossed and painted (and added some extra holes to!).  You can't tell it, but there is a faint shimmer to these where I mixed some metallic patina in with the protective glaze.  The red Swarovski crystals and blue Czech glass dangles give the design some movement and pizazz.


I'll be posting more of my jewelry exploits soon, but for now enjoy the earrings that everyone else made this week!

Posted by Sarajo Wentling at 5:39 AM 2 comments: