For most of last year, I was involved in a earring challenge hosted by the Art Jewelry Elements blog.  Participants were encouraged to make one pair of earrings a week using artisan made beads and/or components.  I found that this was a great way to keep myself motivated to always be creating, to use some of my dragon's hoard of art beads, and to stretch my creativity when it came to making earrings.  Following what other folks were making also introduced me to tons of other fabulous artists to purchase from for my future designs.

So far there has been no word over on AJE about a new challenge for 2014.  I don't want to lose the earring momentum so I'm going to try to keep it going (at least for now).  At the end of the year it sounded like there were a few other folks who were interested in keeping it going too... maybe we'll get organized for more earring blog hop fun.  Stay tuned!

My goal for now is to post two new pairs every other Monday so, without further ado, here are my first two pairs of art bead earrings of the new year.

The first pair is something I actually whipped up for myself.  I lost one beaded hoop earring over a year ago (and I still don't know how I managed it!) so I haven't been wearing the two necklaces that they went with all this time.  As I was looking through some of my new beads for a totally unrelated project, I realized that some of the new lampwork that I got for Christmas were the perfect color for those necklaces.  In true Sj style, I dropped the project that I was in the middle of to whip up these little beauties.  I paired these yummy tangerine lampwork beads by Sue Beads with sterling silver saucers and over sized silver plated earwires from Nunn Design.  I'm not sure yet if I'll keep them on these earwires of if they will be too long for me...time will tell.

My second pair is a variation on a pair I made last year with lampwork beads.  You can see the originals HERE.  They were pretty heavy (not too bad for me, but I could see it being problematic for some folks) so I kept them for myself.  I liked the idea though, so when I got some teal polymer disc beads from Humblebeads, I knew I wanted to give it another try.  I once again made some alterations to some Vintaj brass blanks... cutting off the original loop, adding my own holes, texturing and bending them.  I'm pretty happy with the resulting earrings... SO much lighter than the original pair and super cute! 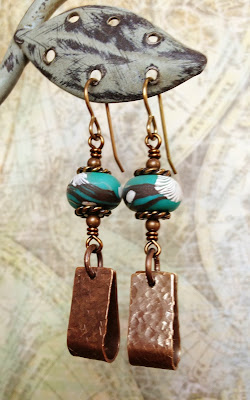 I'm not sure how committed I am to the name "New Earring Mondays."  I'd love to hear any suggestions for a better name.  Catchy titles and descriptions have never been my strong suit so I'd appreciate the help!

Posted by Sarajo Wentling at 7:24 AM