Even though the calendar says January 2014, this is the November 2013 installment of the Inspired by Reading Book Club.  With the way the holidays happened to fall, we shifted things around just a touch.  Life got too busy for me so I didn't get around to the December selection at all.

The November book was Bridge of Birds by Barry Hughart.  True confession time:  I have actually owned this book since May of 1998 (I found the receipt in the book's pages!) and it has just been languishing on my book shelf.  I bought it when Eric and I lived in Chicago (or maybe even before I moved up there!) from the now defunct science fiction/fantasy bookstore called The Stars our Destination.  Eric and I (especially Eric!) were frequent customers and many of our "date" weekends in Chicago ended up with us browsing the shelves there.  Even though the store shuttered its doors after we moved to the Twin Cities, I still feel sadness that such a wonderful independent bookstore was forced to close.

Anyway, let me get back on track here.  Bridge of Birds was a book near and dear to Stars owner Alice Bentley's heart... so much so that she would scoop up a whole bunch of copies whenever it was going out of stock for a new edition.  She would hand sell this book to customers, just like she did with me, and actually had a guarantee of satisfaction for it.  (Ever heard of such a thing??  You wouldn't get that at a B&N, that's for sure!)

Alice loved this book so much that she decided to go into publishing to put out a hardcover edition of Bridge of Birds along with the other two Master Li books by Hughart that had long been out of print.  You can read a short article from Publisher's Weekly about that venture and her amazing devotion to this book HERE.

Sorry for such a long preamble, but I wanted to share my odd connection with this book and the bookstore where I bought it so long ago.  Since I've already gone on and one, I'm just going say that I'm glad that I finally read this one... it was a fun and enjoyable read for sure!  I think it was a great follow up to our last book since it has a sort of fairy tale quality about it.

Now for the creations the story inspired!  There were a few points in the story where the colors and imagery were intriguing or inspiring, but in the end I took a more literal approach based on the story of Jade Pearl.  Even though I finished reading the book very early, time has a way of getting away from you especially during the busy holiday season.

My first design ended up being some cute asymmetrical earrings.  I chose a bird charm for the bridge of birds itself for one side and a star charm to represent the Star Shepherd for the other.  To represent Jade Pearl herself, I added Palace Jade Swarovski crystals and pearl dangles to both sides.  I think that they turned out pretty cute but I had hoped to make something a little more elaborate since I finished the book so early. 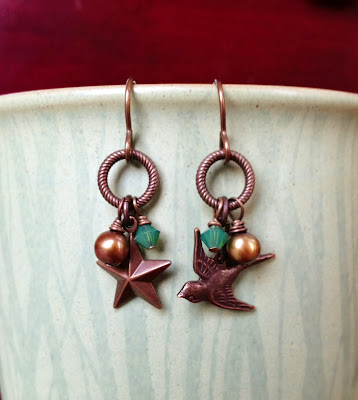 Now that I had actually made something for the reveal (albeit a fairly small something) the pressure was off!  I found time to make a necklace to go with the earrings as a set.  I had originally hoped to use an embossed Vintaj brass bird on one side of the necklace, but it just refused to behave the way I wanted it to.  (I hate it when that happens!)  I switched things up a little from my original design by putting a large jump ring in place of the bird and changing sides for the hook clasp.  I used some shell pearls and a small flower carved piece of jadeite in this one along with some of the other componets from the earrings.  I liked that the decorative brass piece is called "Sparrow's Compass" and thought that was fitting. 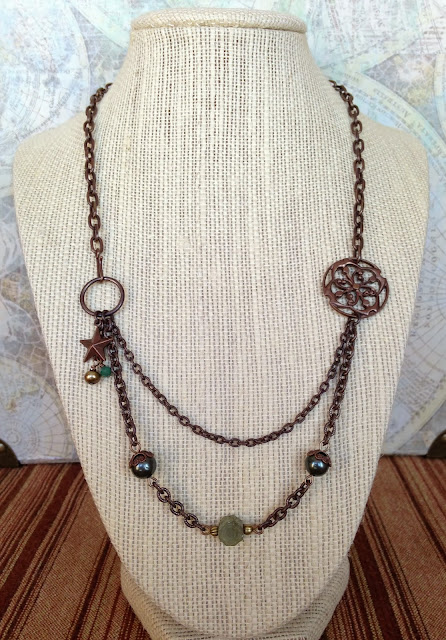 I'm pretty excited that this set sold at my holiday open house in December.  Hopefully my friend is enjoying them!

This is a blog hop.  Please take some time to check out the amazing creations that everyone made for the last two books.