Inspired by Reading: We Are Water

I'm a little late to the reveal, but September's Inspired by Reading Book Club selection was We Are Water by Wally Lamb.  This might be the first book by Lamb I've read since I devoured She's Come Undone when that first came out.  I owned I Know This Much is True but I'm not convinced that I ever read it... clearly, if I did, it certainly didn't leave an impression! 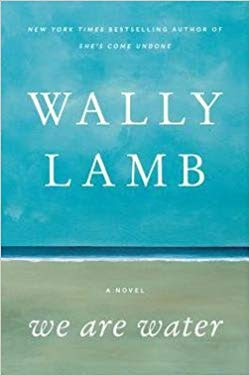 Full disclosure:  I found this a really tough book to get through.  The jumping around from character to character and to different points in time was challenging enough, but it was the content that was really rough for me.  I think this book should have a trigger warning on it... it deals with and recounts in some detail child sexual abuse.  I found that excruciating to read.  I also really didn't like any of the characters all that much... so it was hard for me to get invested too much.  That all being said, I found it an odd choice, considering the format of the rest of the novel, that the entire last section of the book is only from one character's point of view...  you get some wrap up on the other folks, but all from one person's voice.

Anyway, as the title suggests, water is an integral part of the novel.  The central element for Annie's story is the flooding that took both her mother and baby sister's lives when she was only a small child... the event that sets so much in motion.  Much of the story also takes place at the beaches of Nantucket especially for Orion's part of the book.  Because of this water/wave/flooding theme for the book I chose a Vintaj Arte Metal pendant that I had painted a while back as a starting point for my necklace design.  Wanting more visual weight for the pendant, I embossed an Arte Metal circle blank and riveted the two pieces together.  The pendant is simply strung on a collection of Czech glass and shell pearls in shades of blue and silver. 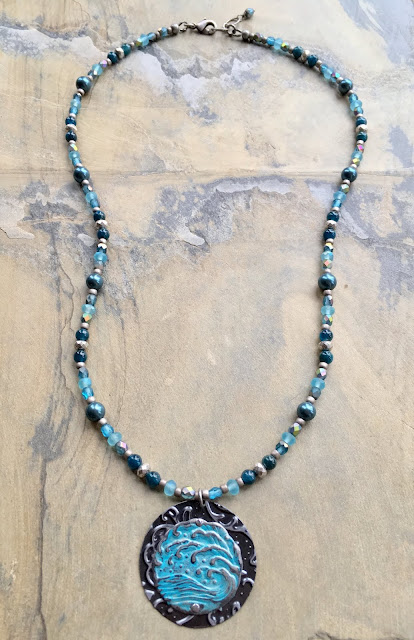 Thanks for stopping by to see my latest creation!  If you'd like to know more about the Inspired by Reading Book Club, the new book list was just announced and you can see it HERE.

Posted by Sarajo Wentling at 11:35 AM