Week five in the Jewelry Making Mojo Challenge that Heather Powers is hosting is all about taking apart a piece of jewelry and reworking it into something new.  (You can see all the details (and jump in) over on the Humblebeads blog HERE.)  Now, the true intent of this week's challenge is to rework something that I actually made, but I'm playing it a little fast and loose for my own purposes.

I have had a necklace that our friend Bob wanted me to remake for his wife Angie (also our friend) for an embarrassingly long time.  (I have learned a very valuable lesson that I should NEVER accept a project without a timeline...it doesn't go very well!)  He actually put in a special order for this necklace based on the colors, but it didn't work out quite as he hoped.  I have honestly never seen a necklace as tangly as this one.  Here's a before picture.  I spent more than 15 minutes trying to get the chain straightened out and this is the best that I could manage. 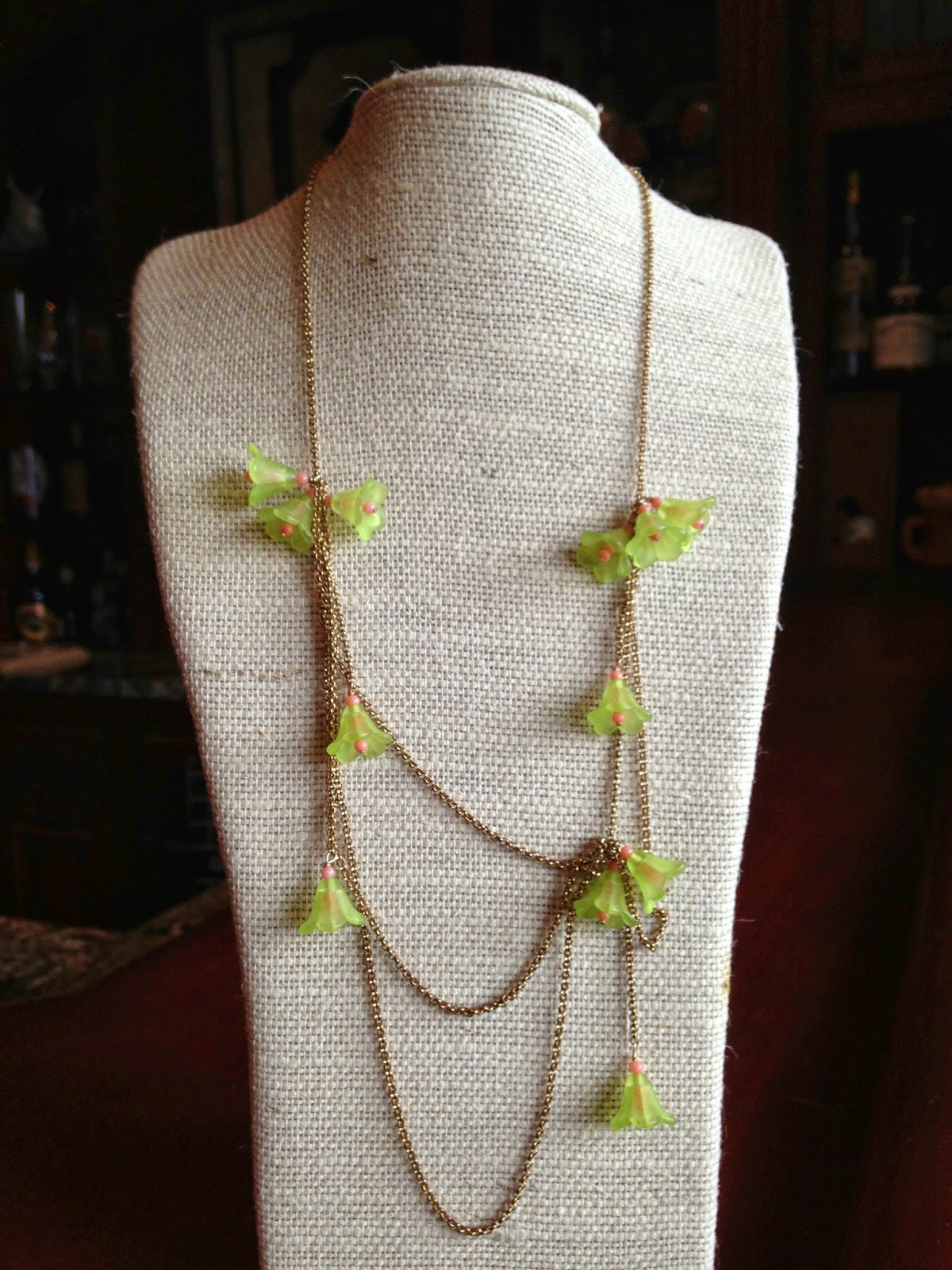 When I first saw the necklace, I really liked the colors of the lucite flowers... that green is right in my wheelhouse.  The peach rounds were a nice contrast to the limey green too but I have to admit that I was relieved when Bob told me that he was fine with me abandoning the the original chain and metal choice for something different.

I gathered a few extra beads to maybe add into my take two design and then started cutting that sucker apart.  Since I wasn't 100% sure what I wanted to do (actually I'm still not!) I decided to start by remaking the flower dangles on Vintaj brass headpins.  I kept most of them as they originally were with three peach beads inside the flowers and one on the top, but I shook it up a little by adding some cute Czech glass flowers in bright coral inside the lucite. 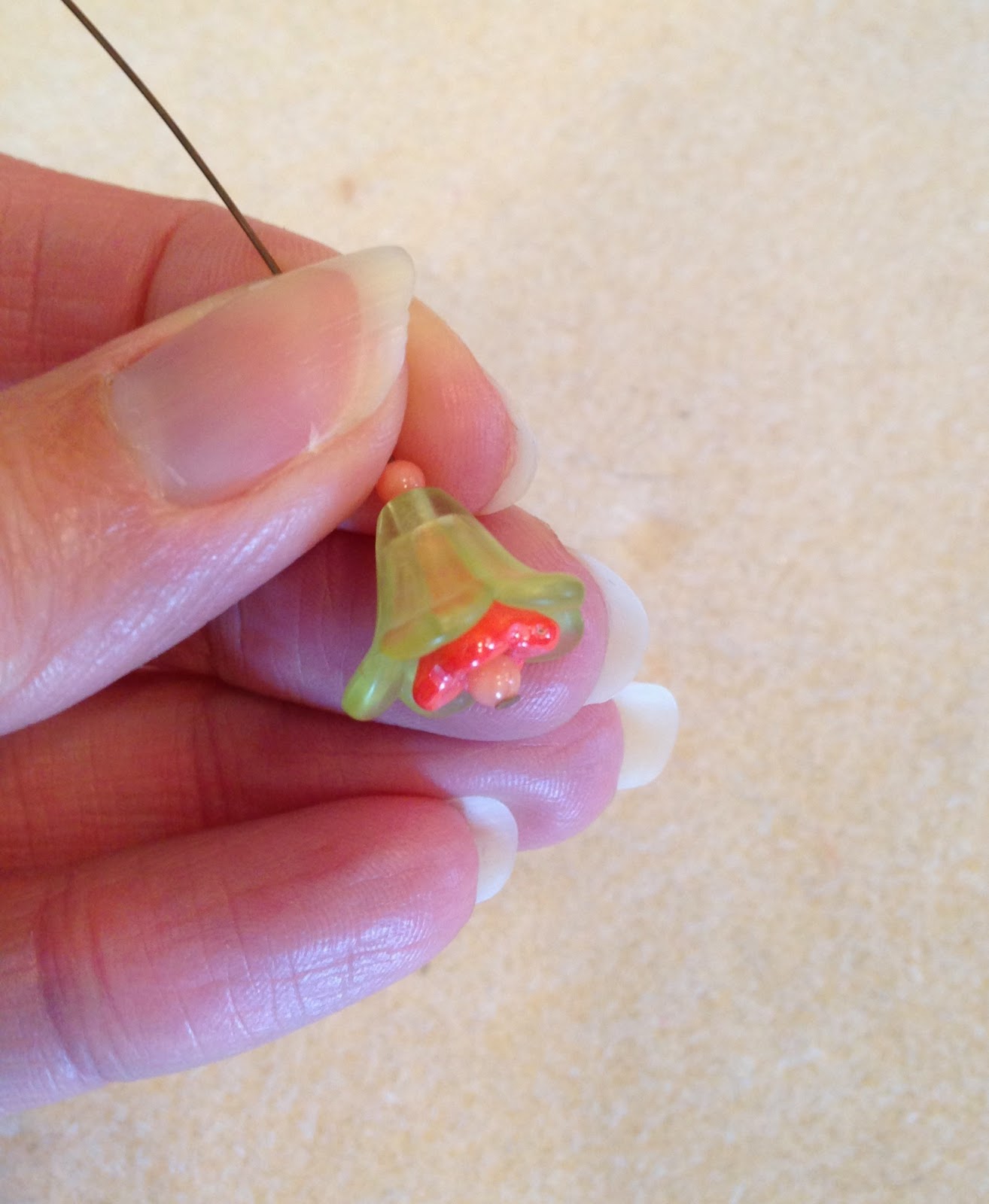 I did talk to Angie about her thoughts and preferences before I started.  She really wanted more of a symmetrical design than the original had been.  She also said she would love an earring option if that worked out.  With that in mind I decided that I would divide the 12 flowers up into three groupings for the necklace... two groups of three and one group of four... leaving two for a pair of earrings.

Here's a bad picture of where I'm going with my idea... I just need to find more time to play around and see if it works.  With a crazy schedule in all areas of my life, I just haven't had the time to get everything done... but at least the project is started! 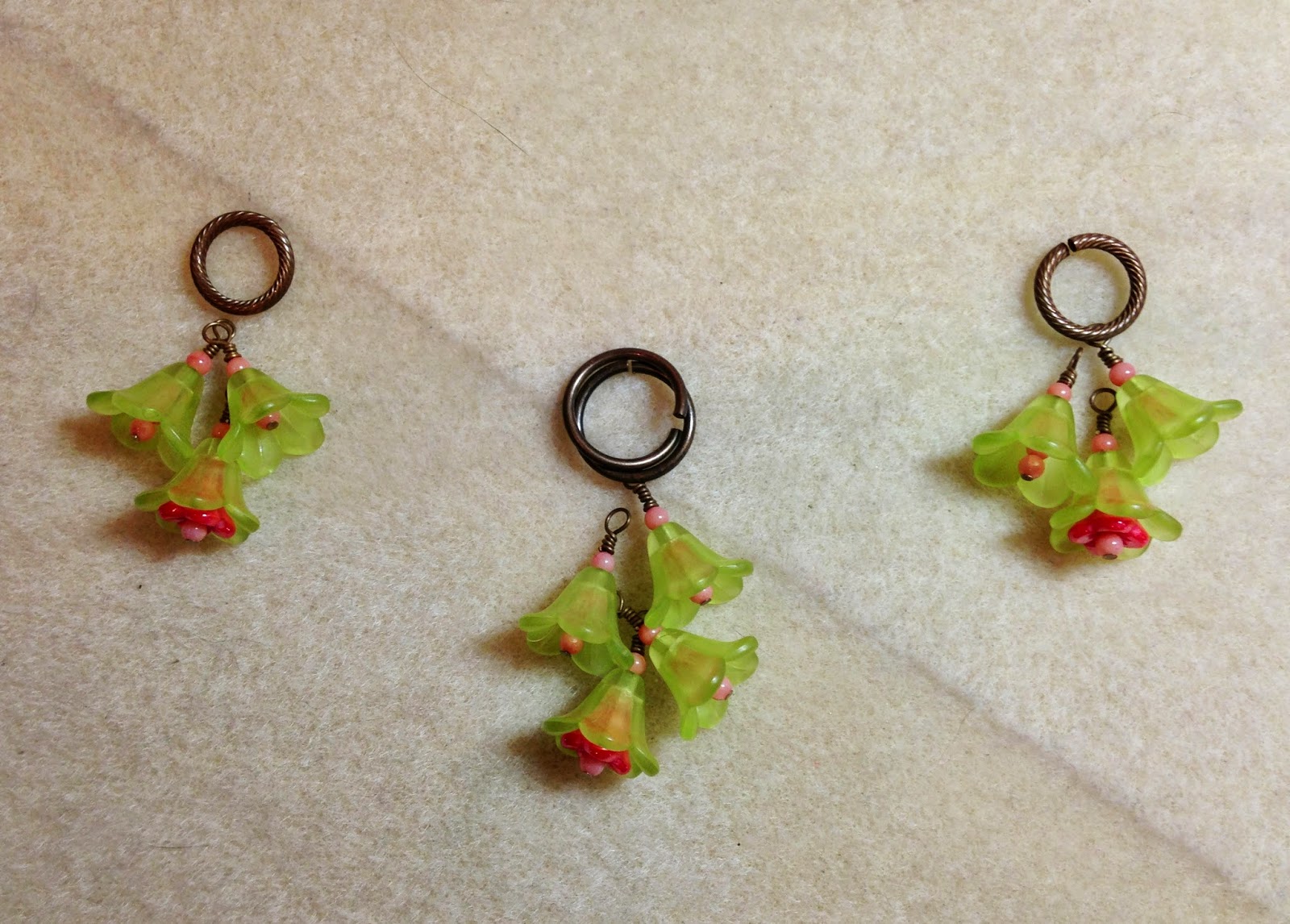 I did make the earrings though... Angie, if you are reading this, let me know what you think about them.  Don't pass judgement on the necklace design just yet since the ideas are still percolating.  Now that I have all the flower dangles wire wrapped I can play with attaching them in various ways until I'm happy with the finished product and Angie is too! Posted by Sarajo Wentling at 8:24 AM