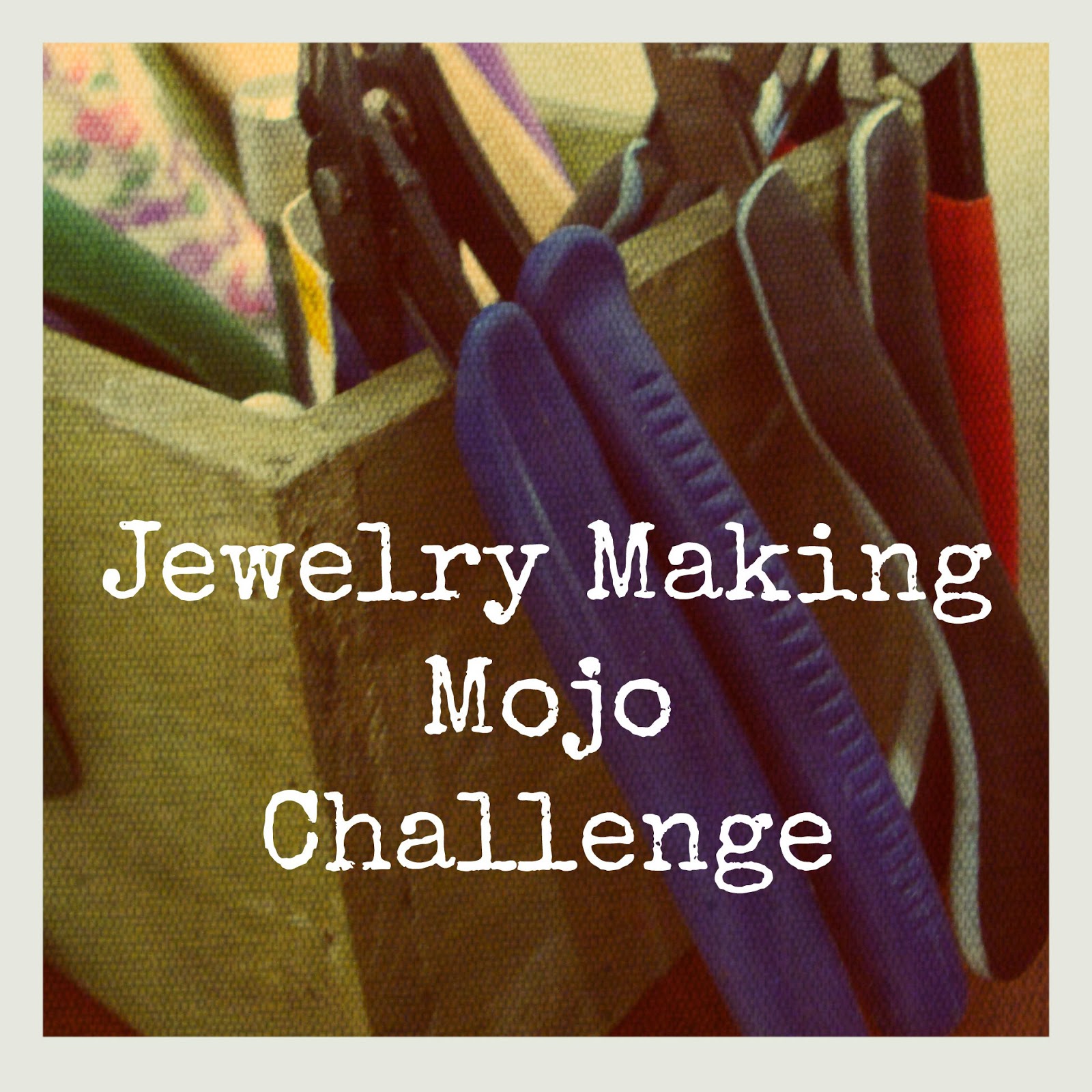 It's week 4 of the Jewelry Making Mojo Challenge that Heather Powers is hosting over on the Humblebeads blog (check out all the details for the challenge HERE).  This week's prompt is about making your own findings.  (For those of you who aren't jewelry makers, findings are things like clasps, earwires, headpins, and jump rings.  They are the backbone of jewelry and can be simple and unassuming or truly spectacular standouts in a design.

Making my own findings is definitely on my list of things I want to achieve.  (Why buy it if I can make it and it would be great to say that something is 100% handcrafted.)  I'm not sure that I have the skills (or all the tools!) to do this in a real way...yet.  I will eventually get there and I think I see some classes in my not so distant future.  But for now, I'm going to try my hand some fairly simple (I hope!) clasp designs that don't require anything I don't already have in my arsenal.

Since I already had Cindy Wimmer's book The Missing Link out on my bead table from last week's challenge, I decided to try a couple of the simple clasps she explains in the front section of that book first.

First up was the simple hook clasp.  The directions called for 18 gauge wire, so I figured that was a safe place to start.  This hook design uses a doubled over piece of wire and, as you can really tell in the picture on the left, I had some trouble keeping the two sides even.  This seemed especially tricky when trying to get the small curl on the unbent end looped with my round nose pliers since they are tapered.  This could be a flaw not just with me but in the directions, but I can't really tell.  My second hook turned out a little bit more even. It's not quite the shape I was going for, but I think it's actually usable! 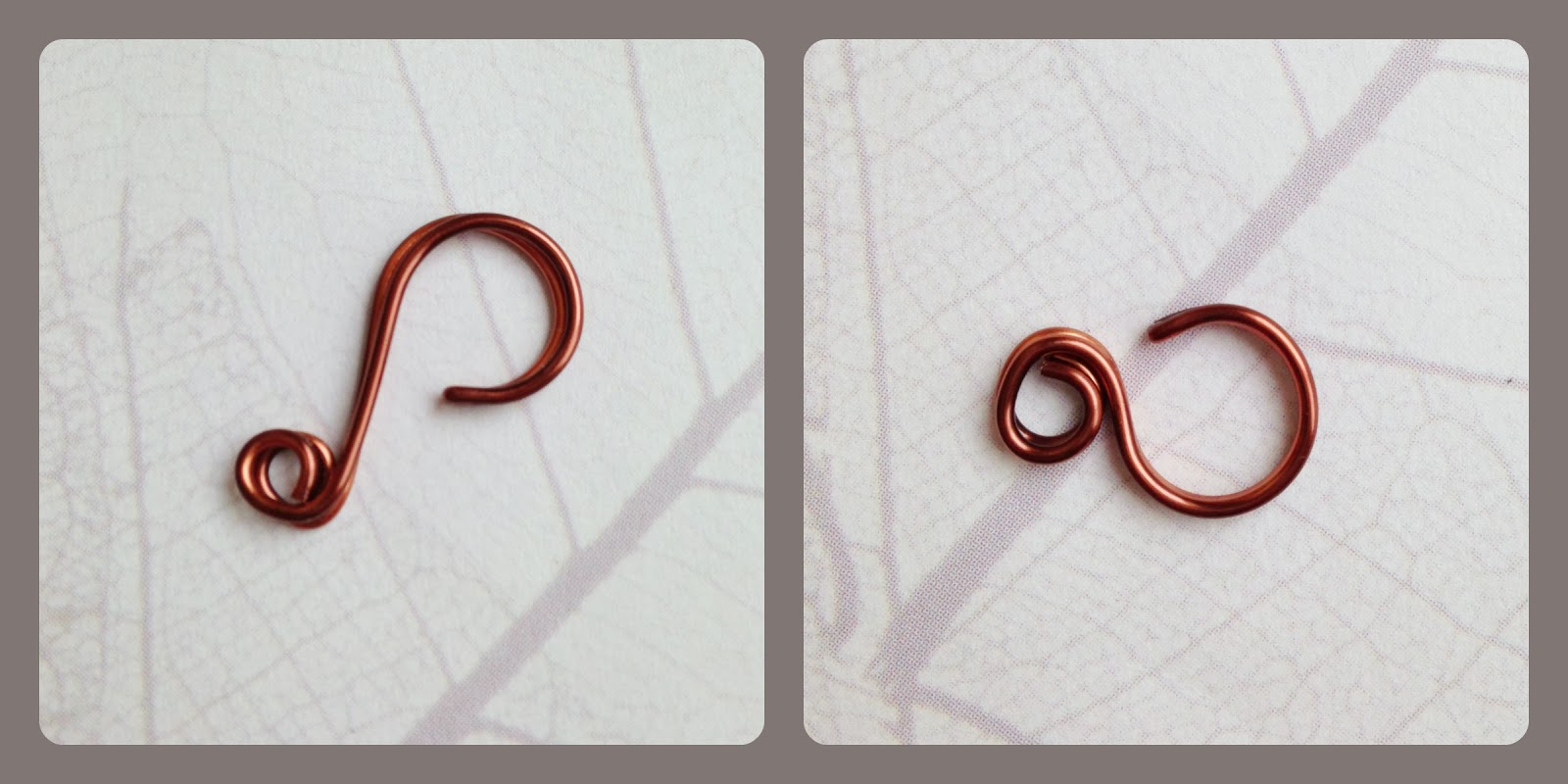 Next I decided to give the S hook clasp a go even though I didn't have the 16 gauge wire that the project called for...what the heck, I'd try it in 18 instead!  Again, not amazing results, but I only gave it one try.  I had a tough time using the bail making pliers so get that second side curved properly (the side on the left of the picture).  This will clearly take more practice (and the correct supplies) to master! 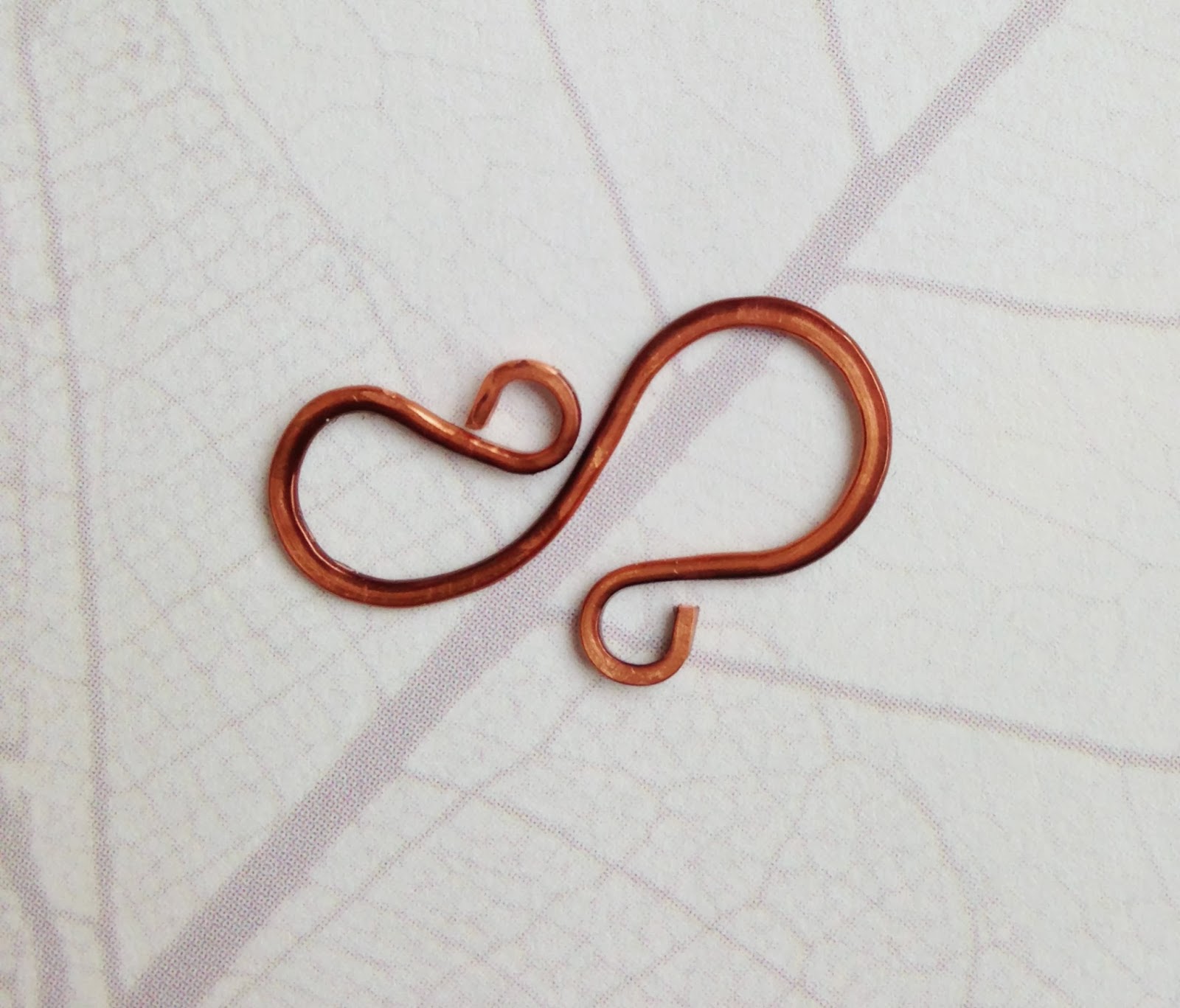 My original thought for this challenge is actually the last one that I tried.  I stumbled upon (and promptly Pinned) a cute spiral clasp and leaf charm over on Lima Beads back in August of last year.  Fellow customer SquirrelGirl, aka Angela, shared a design she had used in one of her pieces and it looked like an achievable (and cute) project to try.  So, now that Heather has lit a fire under me with the Mojo Challenge, I'm going to do it!  (FYI, you can see Angela's instructions HERE.) 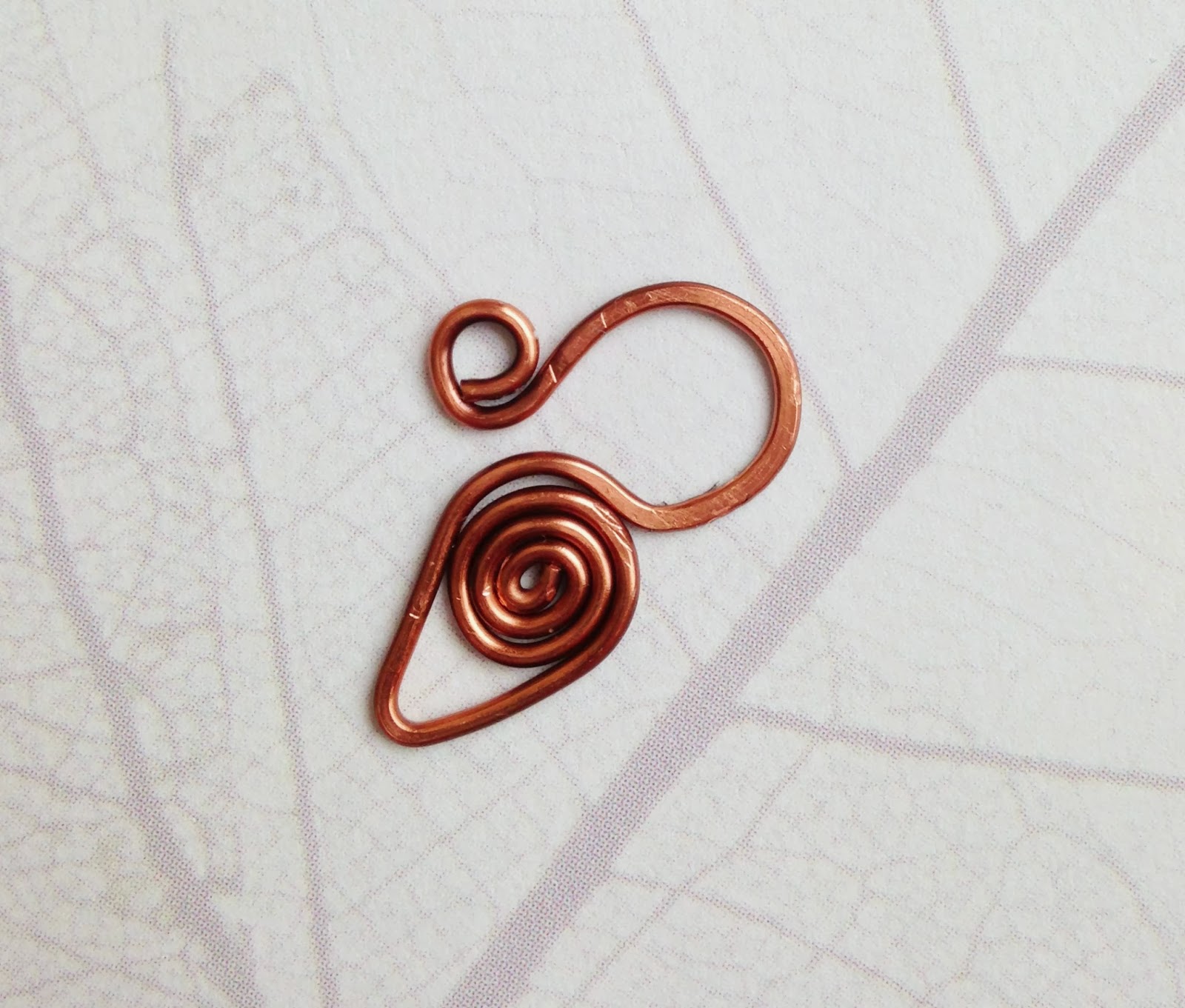 The clasp was not quite as easy as it looked.  I was doing fine until the step where I needed to curl the wire around to form the hook.  As you can see it went a little wonky.  At this point, I was a little frustrated with wire working and didn't attempt the leaf charm or another try at the clasp.  This result will just have to do for now!

I decided that the most usable of my efforts was that second hook.  I paired it with one of my classic hoop links that I made in Week 3 to form the two halves of my clasp.  Since I was working in copper for my clasp, I added in a copper pendant that I had embossed and painted a while back with a combination of blue and teal.  I pulled a variety of glass beads in colors to compliment the pendant and started putting things together.  I added a little dangle from the hoop and here is my completed project! 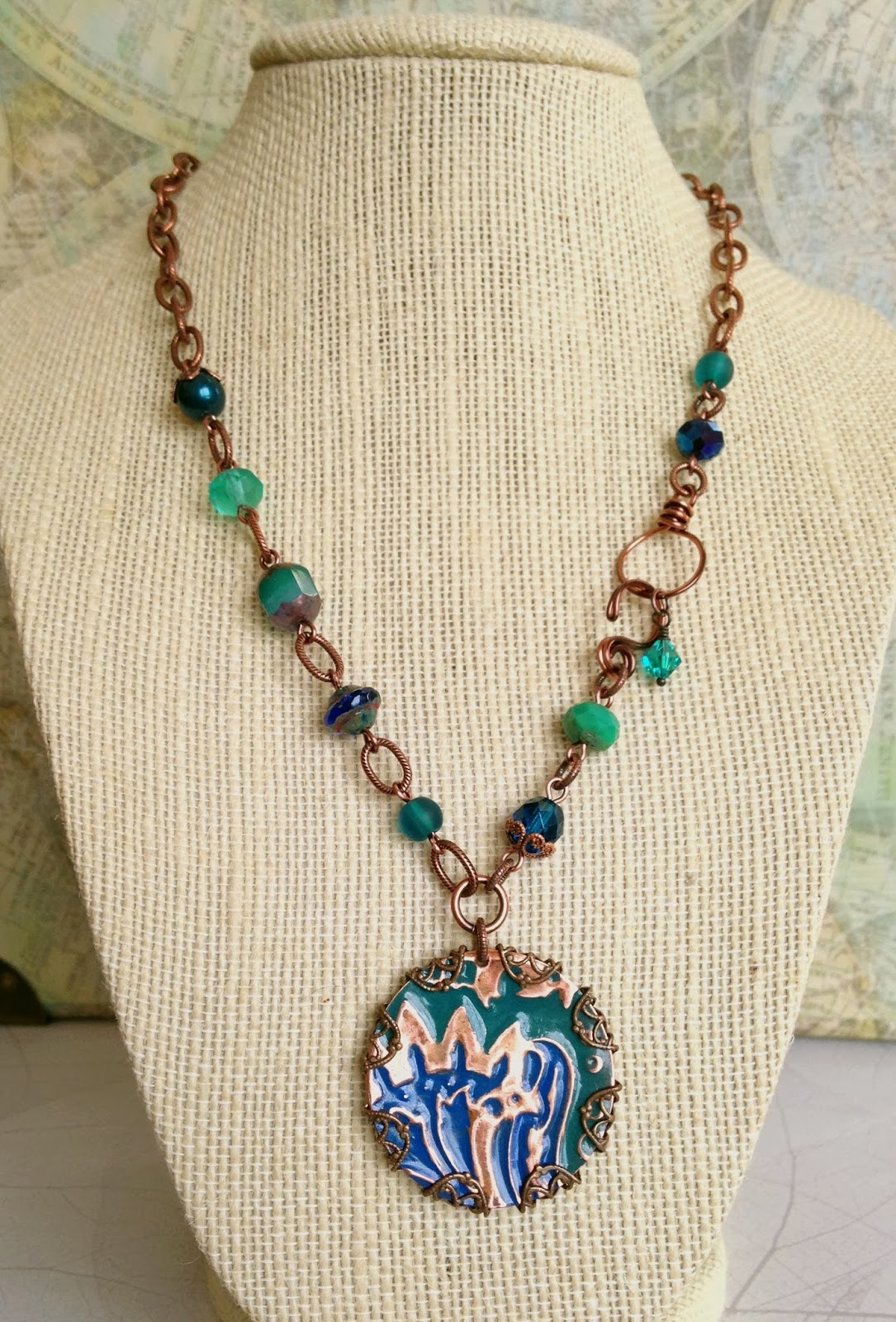 Posted by Sarajo Wentling at 6:15 AM