I'm a little late to the Inspired by Reading Book Club party for August, but better late than never!  Our August read was Dark Matter by Blake Crouch... a science fiction thriller that explores the ideas of choices, paths not taken, and how far we'll go to claim (or reclaim) the lives we dream of.  The last words Jason Dessen hears before he's knocked unconscious are "Are you happy with your life?"  The next thing he knows is waking up strapped to a table, surrounded by strangers who seem to know him, and in a world that's not his own.  Thus begins Jason's harrowing and mind-bending journey to get back to the life and family he loves. 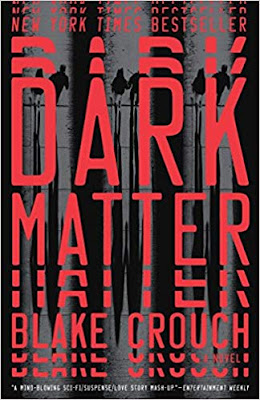 Being short on time, I ended up making two pairs of earrings this month.  First up, I chose a pair of square ceramic charms by Diane Hawkey to represent the box that allows Jason to travel between realities.  I liked the ideas of the squares within squares as a representation of the infinite possibilities.  I added some fun beaded links by Anna Pierson of Saga Hus Components. 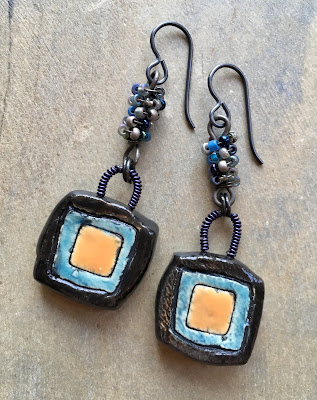 Next up,  I picked out some fun Golem Design Studio lentils with a geometric pattern in black and white.  The shattered pattern made me think of how each decision Jason makes causes his timeline to split off.  Wanting to keep with the sharp lines on the ceramic beads, I chose some cool faceted hematite. 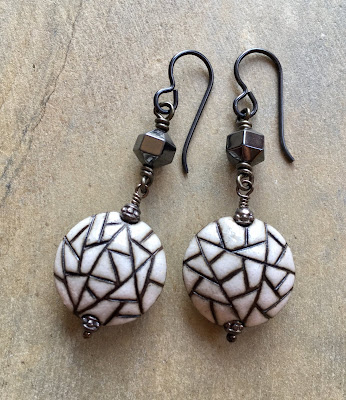 Thanks for checking out my newest creations!  Now it's back to crazy show prep time for the Art Wander!!!

Posted by Sarajo Wentling at 5:42 AM