So, true story.  I'm an art bead hoarder.  Certain artists can boast whole drawers in my art bead hoard.  It's like the more beautiful I think a bead or pendant is, the less likely I am to make it into jewelry.  Ok, not really, but I do find myself just opening up drawers and gazing fondly at my pretties.

What does all of this have to do with feeling (and designing) for fall?  Well, I've been guilty of sitting on a ridiculous number of pendants by my talented friend Erin Prais-Hintz of Tesori Trovati.  I'm in the throes of getting ready for my biggest show of the year, the Edge of the Big Woods Art Wander, in less than two weeks so I figured now was the time to finally make something with my treasures!  Here's a look at the "before" mess as I was just starting to pull beads... 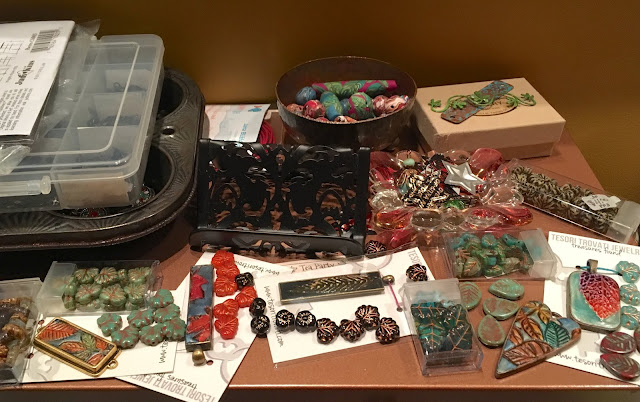 First up, the oldest pendant in my leafy collection... a two sided piece that Eric bought me that was in an inspiration bundle that Erin had pulled together in her shop several years ago.  The bundle came with the pendant, a string of freshwater pearls, some carnelian rounds (those will make an appearance later) and a couple of Vintaj brass blanks.  I kept this necklace pretty focused on the pearls and just added a few Czech glass leaves and barrels in shades of orange and brown along the way to bring out the colors from the leaf.  A brass plated toggle clasp completes the design.  Erin doesn't really do this style of pendant anymore with it's secret message on the back, but I do love them so! 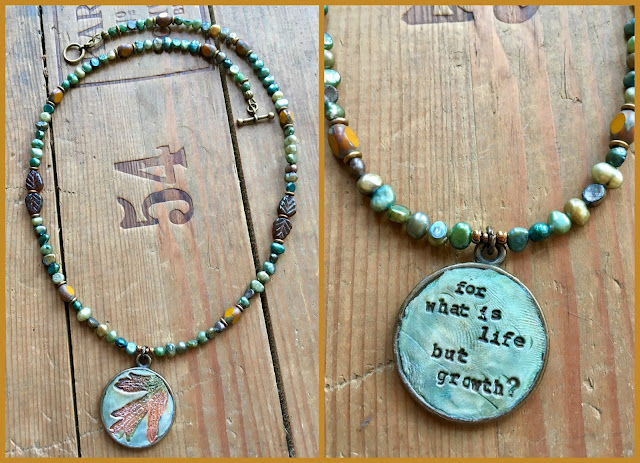 The next thing that jumped out at me to be finished was the most unique color-wise of this whole little collection... a stick pendant in striking black and gold.  I realized that I had a hook and eye leaf clasp that was a perfect match for the leaf on the pendant.  I chose a mix of Czech glass beads in black and gold plus some vintage German glass flowers for the bulk of the necklace.  To balance out the clasp I used a fluted black agate and some freshwater pearls on the opposite side.  This is the most elegant piece in my opinion. 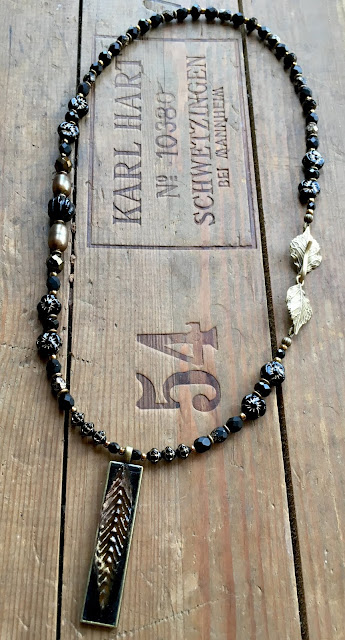 I had a second stick pendant in my collection... an older design but a newish addition to my stash.  I love the mix of orange and blue in the pendant and enjoyed playing with the color combination.  Lots of Czech glass in this one along with some Sunset Dumortierite and matte Denim Lapis.  The orange maple leaves pop against the blues! 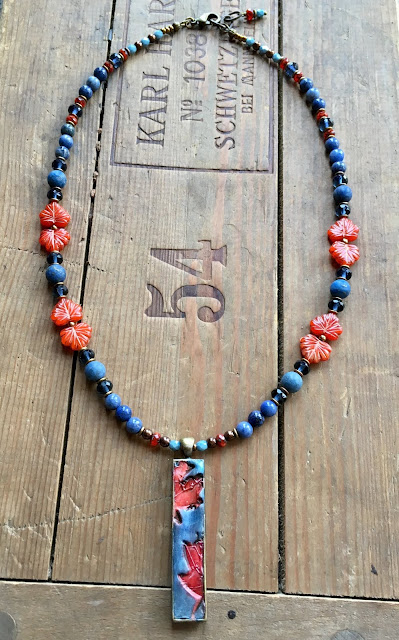 This next pendant is the only one in this batch that has two loops... making it perfect for some fun leafy dangles including an enameled oak leaf by Gardanne.  She sells these charms in pairs so I usually end up making earrings when I buy them, but this singleton was a gift in my goody bag at a retreat.  For some reason, beyond finishing off the pendant and choosing the fun branch toggle clasp, this was the hardest necklace for me to figure out.  I knew that I wanted to go asymmetrical and use a mix of fun Czech glass leaves that looked very much the like the ones on Erin's pendant, but it took me several tries to get things where I wanted them.  The right side is a mix of Czech glass English cut beads and the Carnelian rounds that I mentioned from the inspiration kit.  There are also a couple of vintage glass beads sprinkled into the mix on both sides. 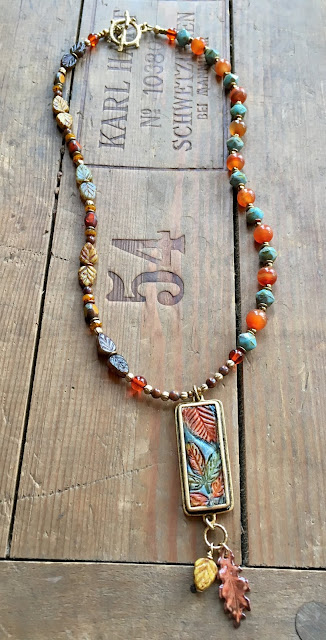 I'm a little bit in love with this next design and the vibrant pendant that inspired it.  Eric thinks I need to keep this one for myself... we'll see about that.  I will admit that I'm always a sucker for the combination of turquoise (or teal) and orange, so this one makes my heart sing!  Another luscious (if I do say so myself) mix of Czech glass and gemstones.  This time Amazonite, Cuprite, Red Line Agate, and Carnelian all make an appearance.  It's a little tough to tell in this photo but there are some small hints of purple hiding in there to echo the darker tones in the pendant's bright leaf. 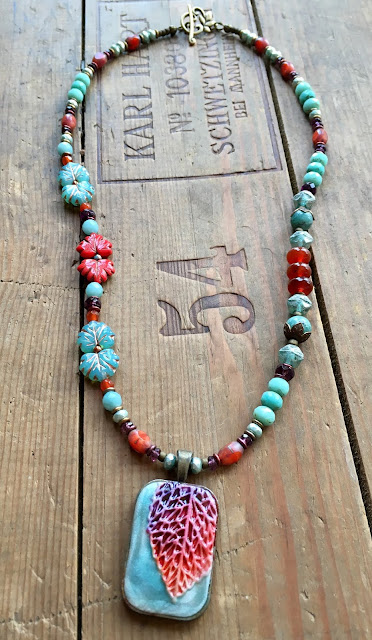 Lastly, for this mini collection of fall goodness, I made a necklace that is a pretty similar to one that I made for the Art Bead Scene back in November 2015.  The original was in brass while this one is copper.  I didn't have all the same beads so I made some substitutions while keeping the basic design and balance.  I'm truly not a heart girl, but there's something about this leafy little number that I adore!  I may actually like this version a little more than the original.

I've never been great about designing for the new season early enough.  I think this is finally the year that I've broken the spell with this collection of fall necklaces thanks to tons of inspiration and beady love from my talented friend Erin.  I've got even more fall designs in the works (or already completed!) that I'll have for sale during the Art Wander September 21-23 at my home which happens to be Studio L this year!  If you're local to the Twin Cities I hope you'll wander out and say hello.

Posted by Sarajo Wentling at 12:56 PM