Summer is finally here... and with the warmer weather many buggy friends have arrived.  Some not so welcome (mosquitos, ticks, ants) and others that bring a smile to my face every time I see them.  This month's inspiration for the We're All Ears challenge from the Earrings Everyday blog is one of those friendly bugs... the firefly or lightning bug (which is what I always call them.)

Erin mentioned in her blog post that she's only seen fireflies a few times in her life.  At first I was a little shocked and taken aback by that... I mean they were all over the place when I was growing up in Alabama!  But then I stopped and thought about it and realized that I really have only seen them maybe twice in the 17 years I've lived in Minnesota.  I guess I just didn't think about it since the mosquitoes make it unpleasant to be out at dusk.  I just assumed that they must be out there... but I think we may be too far north for these magical little critters to thrive here! 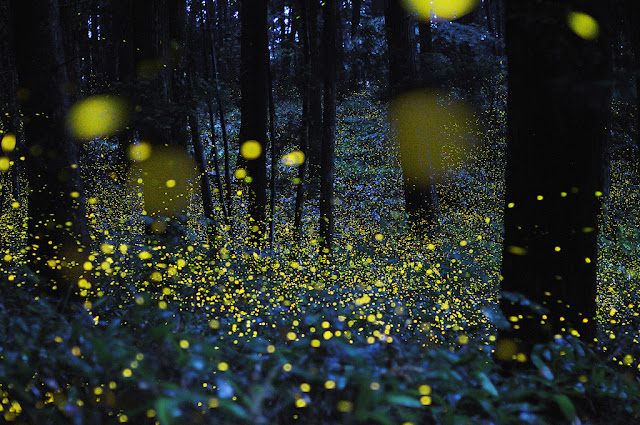 I feel like the picture above is what summer nights of my childhood felt like... just a vast expanse of flickering fireflies.  I know there were really never quite this many, but things just feel different when we are children.  My friends and I spent countless hours chasing lightning bugs, holding them in our hands mesmerized by the flickering light of their tails, bringing an unlucky few home in jars to light our bedrooms.

When this challenge was announced overachiever me wanted to try and make some little firefly charms out of copper sheet using Heather Powers' "metal sketches" technique and some patinas.  Realistic, time crunched for two trips in two weeks me said "Shut up, that's not happening!"  Sigh.  Maybe I'll give that idea a try down the road when I have time on my hands.  *Laughs hysterically.*

Rational me remembered that I had a strand of little green and gold Czech glass ladybugs in my stash.  (At least I think they're ladybugs since I have the same shape in red with black... but I'm not sure why the bead makers decided on this particular color combo.)  I dug the little guys out and made the executive decision that they would have to work as fireflies... maybe they're just short!

The first design that came to mind involved having the little buggy beads dangling from some sort of flower.   The flowers are mostly white with faint touches of color so I added more of the green in the centers. 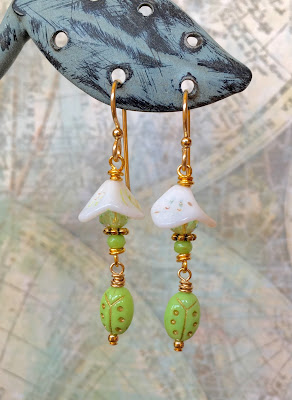 The second pair of earrings didn't end up the way I was initially imagining them, but I like the end result so much better!  I thought I could pull something off where I had little piece of waxed linen with seed beads tied to the ends hanging behind, and reaching below the bug bead.  I made one that way and it just didn't sit right and I wasn't loving it.  The earring design was fine without that but lacked something.  I rummaged through my tubes of seed beads and found some in a similar green that, thankfully, fit onto the topmost jump rings.  A small touch, but it gave the needed pop the design had been lacking. 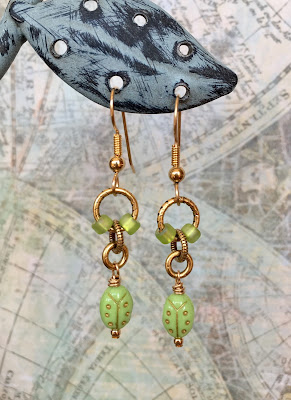 I don't often work with gold, but it just seemed the right thing to do for both of this month's pairs because of the gold in the bug beads.  I also thought the tiny gold filled bead underneath the bug was reminiscent of the firefly's tail.

In other news, I also made a firefly necklace the same weekend that I made these earrings.  You'll have to wait to see that one though until the reveal for the Art Elements June Theme Challenge.  Find out more about that HERE.

Posted by Sarajo Wentling at 7:51 PM