This month's Inspired by Reading Book Club selection was Mistborn: The Final Empire by Brandon Sanderson.  This book is the first in Sanderson's Mistborn series and I've been meaning to read it for a while now.  (I read Sanderson's young adult book The Rithmatist and really loved it... his Alcatraz books, not so much.)

As you may know, I hate trying to summarize books... I'm just a "I loved it" or "I hated it" sort of reader for the most part.  So this time I'm totally cheating in that I've edited down a bit of the book description from Wikipedia.  (Bad librarian, I know.)  Anyway, the Mistborn series is set in a roughly medieval dystopian future on the world Scadrial, where ash constantly falls from the sky, all plants are brown, and supernatural mists cloud every night.  The "Lord Ruler" has ruled over the Final Empire for a thousand years as an immortal tyrant and god.  Under his rule, society is stratified into the nobility, believed to be the descendants of the friends who helped him achieve godhood; and brutally oppressed peasantry, known as skaa.

Central to the Mistborn universe is the presence of magic. The most widely known discipline of magic is called Allomancy, which allows users to gain magical powers by swallowing and "burning" specific metals to gain supernatural abilities. Some of the metals used this way include pewter, tin, gold, copper, bronze, steel, iron, and brass.  Normal Allomancers (Mistings) have access to one Allomantic power, but an incredibly rare subset of Allomancers, called Mistborn, have access to every Allomantic power.  Two of the main characters of this book, Kelsier and Vin, are Mistborn.  This first book in the series chronicles an unlikely band of thieves, led by Kelsier, working together to raise a rebellion and overthrow the Lord Ruler and the Final Empire. 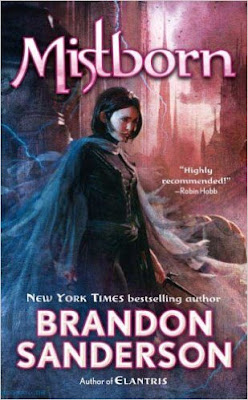 I knew that I wanted to do something to play off of the various metals that the Mistborn and Mistings use to activate their various powers.  I wasn't sure exactly sure what I was going to do, but I was assuming that I would do some sort of mixed metal creation.  That's not how things progressed though!

I found a focal in my stash by Green Girl Studios that made me think of the swirling mists in the book.  Bingo!  I decided to orient the cloud focal sideways and make a slightly shorter necklace.  At first I had the misguided idea that I would string a pattern of beads on one side (attached with a jump ring) and then tie strands of black waxed Irish linen on the other side.  Well, let's just say that didn't work out!  (Although, happily, I was able to use the pattern of beads that I had spent so much time figuring out on another necklace that will be shared for a different challenge later in the month... here's a sneak peek though.) 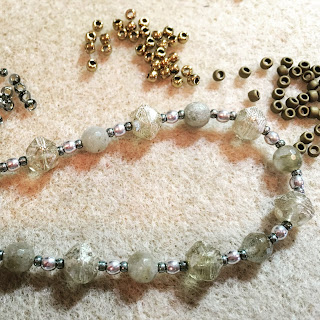 That idea scrapped, I went with plan B and used the waxed linen on both sides of the necklace.  I cut three long strands of the black linen and tied to the pendant with a lark's head knot, repeating the process for the other side.  I wanted the black strands to represent the ribbonlike strips of cloth that flow from the shoulders of a Mistcloak.  Along the lengths of the waxed linen I then tied little groupings of seed beads in various metallic colors and finishes to represent the various metals burned by the characters.  Now I didn't keep strictly to the actual metals used, but instead chose six different colors that worked well together and with the pewter pendant.  To break up the runs of knotted seed beads, I slid some silver toned corner-less cubes over all the strands.  To finish it off I simply tied on a fun toggle clasp at the back. 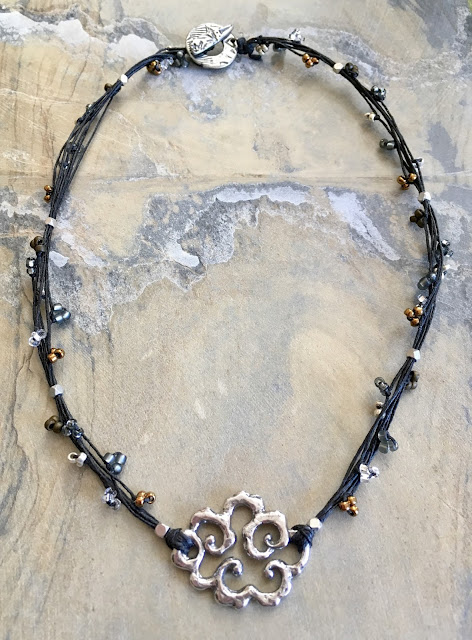 Thanks for stopping by to check out my newest creation!  Now it's back to work for me... lots to do before I head to the Bead & Button show!

Posted by Sarajo Wentling at 11:33 AM