Inspired by Reading: The Silver Witch

Wow, I actually read the August book club selection a whole month ahead!  (Ok, only because I didn't re-read the July selection, but still.  Bonus points for being ahead of the game!)  Anyway, this month the Inspired by Reading Book Club read The Silver Witch by Paula Brackston.  Pretty much all of this author's titles have "witch" in the title so I was a little concerned that I would be dropping in on the middle of a series.  Not to worry, all of her books with the exception of her newest book Return of the Witch are stand alone titles.  I liked this one enough that I'm tempted to check out her other books sometime soon. 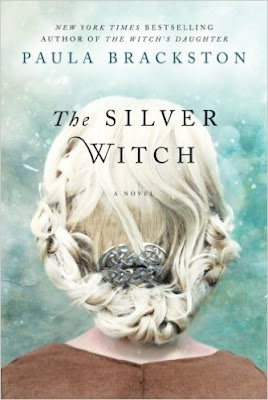 Anyway, back to the book at hand!  As I'm truly terrible at summing books up, here's part of what the book jacket has to say:

A year after her husband's sudden death, ceramic artist Tilda Fordwells finally moves into the secluded Welsh cottage that was to me their new home.  She hopes that the tranquil surroundings will help ease her grief, and lessen her disturbing visions of Mat's death.  Instead, the lake in the valley below her cottage seems to spark something dormant in her - a sensitivity, and a power of some sort....

On this same lake in Celtic times lived Seren, a witch and a shaman.  She was respected but feared, kept separate from the community for her strange looks.  When a vision came to her of the Prince amid a nest of vipers she warned of betrayal from one of his own.  Prince Brynach both loved and revered her, but could not believe someone close to him wished him harm, even as the danger grew.

As the story unfolds, Tilda's powers become stronger and more apparent and we begin to see the connections between Tilda and Seren.  Her grief also begins to fade as she finds new friends, new inspiration for her work, and a potential new relationship.  Unfortunately for Tilda, it also becomes more apparent that there is an ancient danger lurking that threatens her and those she cares for and she must figure out how to protect the life she is building.

For my designs this month I drew inspiration from a couple of different directions... the basic Celtic symbolism, the anfac, and the hare.

I loved the idea of the anfac, or water horse, that was the mystic protector of the lake.  There wasn't a really clear description of what the anfac looked like (at least not that I remember!) but I found a pendant from my Bead & Button purchases from Green Girl Studios with a dragon on the front and a Celtic inspired design on the back.  Score!  Whenever I think of the mystical, I think of gemstones... especially those with shimmer or fire to them.  For this necklace I pulled together some Labradorite pebbles with tons of great fire, some silvery peacock freshwater pearls, and some small garnet rondelles.  I love the resulting mix of silver/grey and deep red! 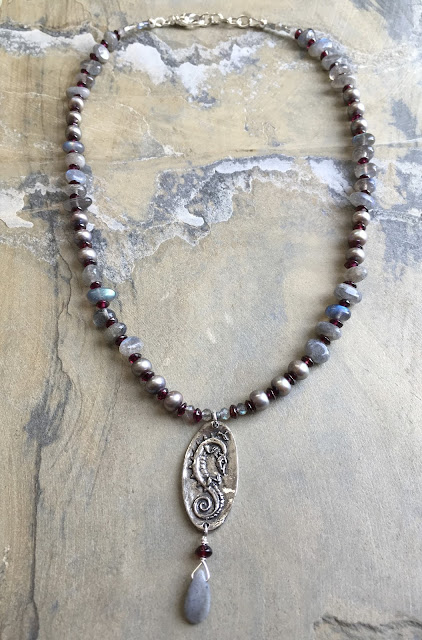 Next up, I've got two variations on a theme with necklaces featuring a Celtic knot work designed pendant in two different colorways.  Originally, I was just going to make the blue one, but things fell together for the green version as I was making decisions for the blue one.  Who am I to argue with inspiration??  The blue version feels wintery to me with the silver toned wire and findings and cool tones of the beads I found.  This seemed most appropriate since most of the book takes place in the winter and the colors also fit in nicely with the book cover that I had.  The beads are aquamarine, Czech glass, and some glass that I got from one of Andrew's destash events.  For the green version I used copper and a combination of Czech glass, more destash glass (from the same lot!), and some Celtic patterned copper beads... the bead dangling from the pendant is chrysoprase. 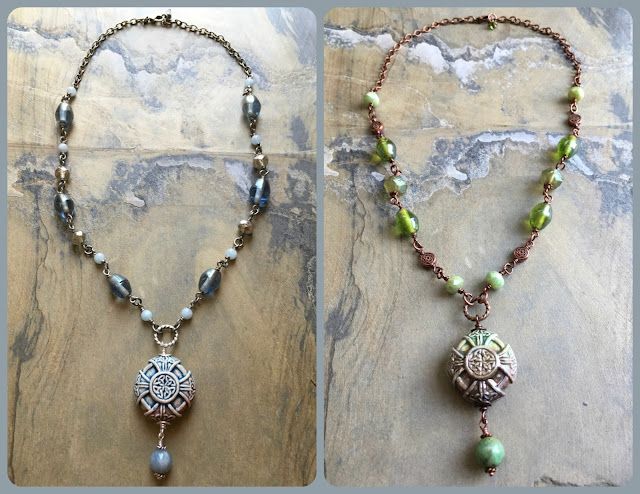 Finally, I chose a pendant featuring a lovely hare from White Swan Illuminations that I picked up at Allegory Gallery during their Creative Camp last month.  I didn't realize what a great find for book club I had until I was back home and got to the part when Seren changes into a hare to warn her prince and then, later, you realize that the hare that Thistle had been frolicking with wasn't a normal animal at all.  Anyway, as I was attempting to put some of my new treasures away I realized that the pendant looked really great with the vintage plastic bead mix that was in our Creative Camp goody bags... surely a sign that this necklace needed to happen!  I cherry picked most of the green beads out of the mix along with some creamy ones and two dark orange beads to make up the bulk of the necklace.  To round things out I added a few small Czech glass rounds, small gemstone beads (some sort of agate or jasper maybe?), and bronze seed beads. 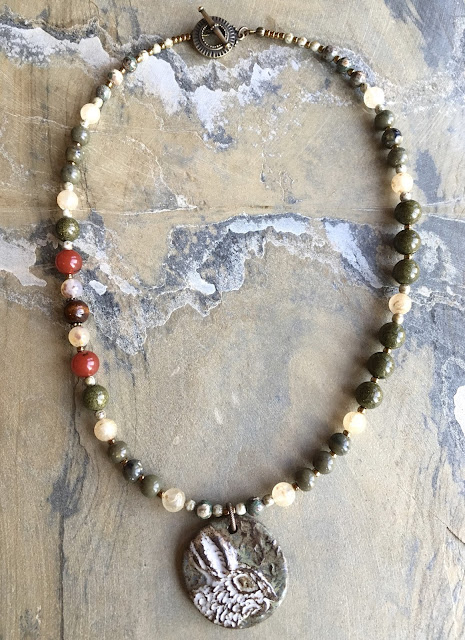 I may have gone a little nuts this month, but I'm in major production mode for a big show I have coming up in September.  At this point I'm trying my best to follow through on any and all ideas that I have to ensure that I have plenty of finished jewelry for the Art Wander.  So, enough chit chat... I'd better get back to work!

Posted by Sarajo Wentling at 5:24 AM