Inspired by Reading: Drinking the Rain

This month's installment of the Inspired by Reading Book Club was Drinking the Rain by Alix Kates Shulman.  I can be a little picky when it comes to memoirs... I tend more toward those that are written with a lot of humor or are about someone with whom I'm more familiar.  So this is another one of those books that I never would have picked up on my own.  I really look forward to hearing what all the other book club members thought of it.


My take on this book is it is a memoir of the author's mid-life crisis.  Maybe that's not entirely fair, but I guess I had a hard time relating to what she was going through over the period of time that the book covers.  When the author turned 50 and her kids were all out of the house, she decided to spend the entire summer pretty much alone at the family's extremely rustic (we're talking no electricity, phone or indoor plumbing!) beach cabin on an island off the coast of Maine.  Since my idea of "roughing it" involves a cabin with modern plumbing, electricity, and (preferably) air conditioning, I was already having a hard time understanding why she would do such a thing!  This is just the start of big changes for the author... her children are grown, her marriage is falling apart, and she seems to struggle to find relevance in the things that used to fill her New York City life.  There is certainly something to be admired in her efforts to live as naturally as possible off the land while leaving as small a "footprint" as she can, but it seems like she really takes it to an extreme to which I couldn't really relate.  I did finish the book, and it doesn't all take place in NYC or the nubble... but as the island is truly the heart of the story, I focus my thoughts there.

For my piece I decided to focus on the beachy setting of most of the book as my inspiration.  In particular, I thought about the sea gulls that Alix stole fresh caught fish from at the nubble.  I had one of Heather Powers' adorable Humblebeads pendants with a sea gull on it that I thought would be the perfect focal to represent life on the island.  I incorporated a couple of different colors and shapes of pearls (both natural, "shell," and Swarovski) to represent both the sea and the scene where Alix finds pearls in the batch of mussels she has cooked.  I mixed in some shell beads that I've been hoarding forever as well as some little coconut shell beads to keep it feeling tied to the sea shore.  I rounded out the design with some small Amazonite rounds, Fluorite rondelles, Czech glass, and some Picasso finish seed beads as spacers. 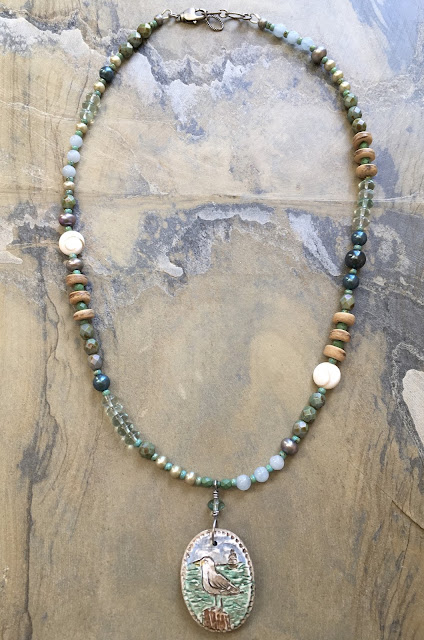 As a weird aside, I've noticed myself stringing way more necklaces lately.  When I first starting making jewelry, stringing was pretty much all I did as far as necklaces go... then I got better at making loops and entered a phase where almost all my designs involved wire wrapped links or simple links on head pins.  Now I guess I've found some middle ground and am a little more evenly split between stringing and wire wrapping.  I guess it's a combination of finally getting the hang of properly closing crimp covers (don't judge me... it's trickier than it should be!) and also using more waxed linen in my designs.

Ok, enough rambling from me!  You can see what the others in the group made over in our Facebook group HERE if you're interested in joining in the fun.  I'm sharing a day earlier than normal because of another reveal schedule for tomorrow.

Posted by Sarajo Wentling at 5:11 AM