Inspired By Reading: The Night Circus

I've been looking forward to the Inspired by Reading Book Club reading this month's selection, The Night Circus by Erin Morgenstern.  This was the one that I recommended so I'm hoping that most of the group enjoyed it.  I think I got wind of this title before it was published (I was still working in the library and regularly read review journals and such) and was first in line for my library's copy when it came out in the fall of 2011.  That was a long time ago so Eric and I listened to most of it on a road trip last month and finished it up driving back and forth from Minneapolis during the Fringe Festival. 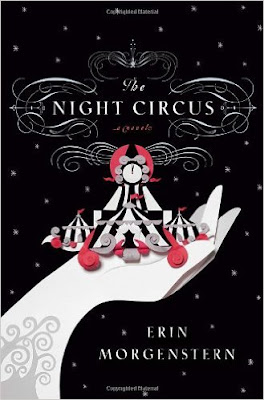 This book totally captivated me from the start (both times!) and I enjoyed getting caught up in the magic.  I will say that I had a harder time tracking the jumps in the timeline when we listened to it.  I seem to remember having a similar issue when reading the first time, but I could just flip back to a previous chapter to double check the dates.

I love the idea of a truly magical circus that arrives without warning and is only open from sundown to sunup.  Morgenstern describes the circus in such rich detail that you could almost see, smell, and taste its wonders.  The story has a fairly large cast of characters but, instead of getting them confused, I felt they were all fairly distinct and I enjoyed seeing how the author wove various threads together as the story progressed.

Part of what inspired me was the color palette for the circus (all white, black, and shades of grey) and the addition of red in the outfits of the circus's devotees known as the reveurs.  I wasn't entirely sure what to do with those thoughts until we bought a new board game called Tsuro over Fourth of July weekend.  The advertising insert inside the box had some really great images including some circus tents in white and a reddish grey.  I decided to see if I could cut some of those pieces out and put them in bezels covered in resin.  The more I look at it after the resin went on top of the pendants the more brown it looks, but you still get the idea of the circus I guess.  I started working on three circus tent bezels but only got one completely done before time ran out.  I'll go back and keep working on them when I get around to pouring more resin.  My favorite of the three is the one on the right in the picture below but the resin didn't behave on my first try.  Thank goodness the paper underneath wasn't a casualty!

For the necklace with the one pendant that I actually completed, I made wire wrapped bead units with moonstone, smoky quartz, faceted pyrite, and an owyhee jasper cube to pull the colors out of the pendant.  I thought the facets in the pyrite echoed the girders in the pendant.

The small circles I cut out for coordinating earrings look more dark red and white/light grey so I decided to dangle dark, pomegranate colored Czech glass rondelles from them.  I like the slightly asymmetry of the stripes and think they feel kind of mod. 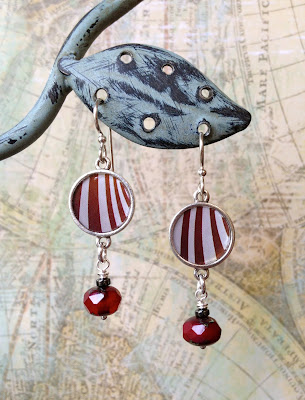 When I was at Bead Fest last weekend, I ended up doing a big wholesale Czech glass purchase from Nirvana Beads.  One of my favorite finds were some red and black flowers that look like poppies to me.  I couldn't pass up the opportunity to use some of those for a second pair of earrings in honor of the red flowers (or other items) that the reveurs wore to indicate their devotion to the circus.  I mixed in some hematite, black crystal and silver findings to keep with the appropriate color scheme.  (Now that they are made I realize that my steam punk costume with it's black and white time piece print corset and black and white striped bustled skirt would be the perfect starting place if I find the circus one day and become a reveur myself!) 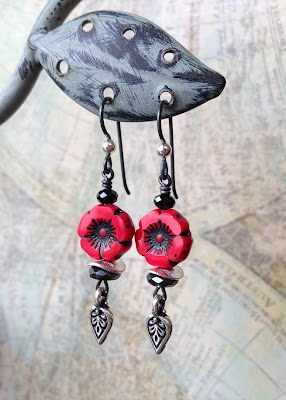 I had lots of ideas this month... As I was punching out pieces, I realized that there was also a section of cool swirly clouds that made me think of the cloud maze tent inside the circus, so I punched that out too!  I kept this one pretty simple and went for a charm style.  I added a little urn charm that made me think of one of Widget's jars of memories that Bailey found in his little tent... maybe that's the container that held Bailey's memory of his tree.  I added a couple of other beads including an iridescent faceted bead that was included in a lot with a strand of moonstones from Andrew. 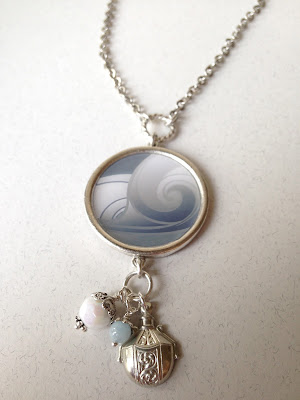 All of the designs here will be available for sale during this year's Art Wander studio tour at the end of September.

This is a blog hop.  Please stop by Andrew's blog HERE to see what everyone else was inspired to create!

Posted by Sarajo Wentling at 1:46 PM