This month the Inspired by Reading Book Club read Home by Toni Morrison.  I've read some of Morrison's other books over the year, but Home was new to me.  Home tells the story of Frank Money, a broken and angry veteran of the Korean War who is on a quest to save his little sister Cee and return her, and himself, home... to a place he swore he'd never return.  I read the book a while ago now and made the mistake of not writing down my thoughts and impressions of the book right away.  Now the details are a little fuzzy for me but I do remember being appalled, but not surprised by, the horrible racism Frank and Cee both were subjected to and the injustices and injuries they both endured. 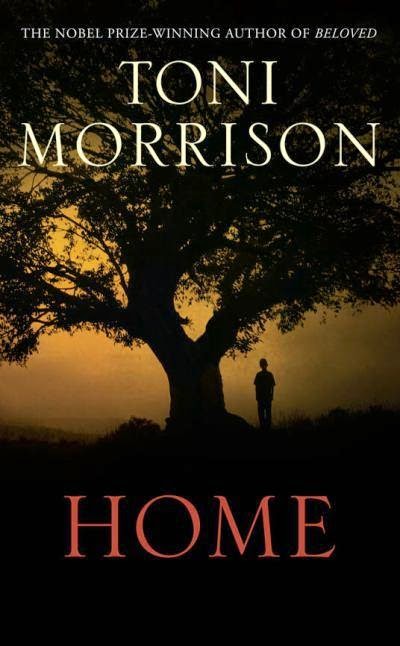 As soon as I read the opening chapter of the book I had my inspiration.  The as of yet unnamed Frank and his sister have crawled under a fence onto private farmland where they encounter two stallions fighting for dominance.  Here's the description the narrator gives: "they stood like men.  Their raised hooves crashing and striking, their manes tossing back from wild white eyes."  This scene of wonder soon turns to horror as the children try to make their way back to the fence.  They stumble upon some white men dumping and burying a black body in the field.  Frank is telling this story looking back on events of his childhood and tells the reader at the end of the chapter that he had forgotten about the burial for a long time and only remembered the horses.  "They were so beautiful.  So brutal.  And they stood like men."

I immediately thought of some earring charms that I bought from Nancy Adams of Round Rabbit a million years ago.  (Ok, maybe not a million, but before she was Adams anyway.)  They feature two stallions rearing up at each other and I had gotten them in two different glaze colors so I figured I'd whip something up with both sets!  (Plus that clears out space for new art beads... I can buy more now, right??)  I also thought that the star at the top of each charm could represent Frank's military service and the hearts at the bottom his love for his sister.

These are very much variations on a theme.  For the first pair I wire-wrapped the charms to the ear wires and added some fun little maple leaf Czech glass beads.  I really love the cool blues in this pair. 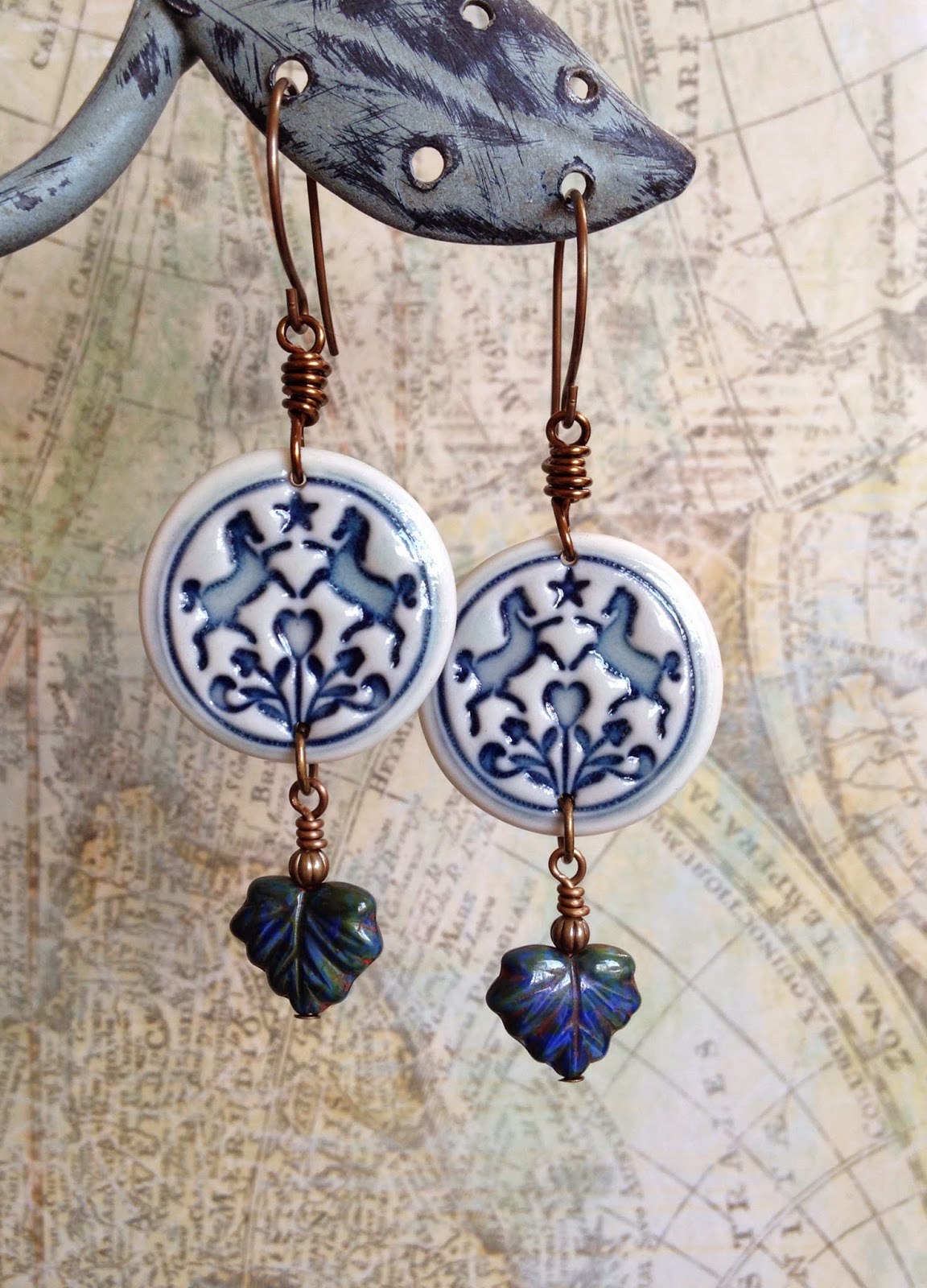 For the second pair, I tried something a little different to connect the charms... I used some copper balled head pins and made wrapped loops behind the charms.  I like the effect and will try this technique again.  This glaze combination is one that I have gravitated to on more than one occasion.  I love the "mango" color with the pale blue... it reminds me of a sunset. 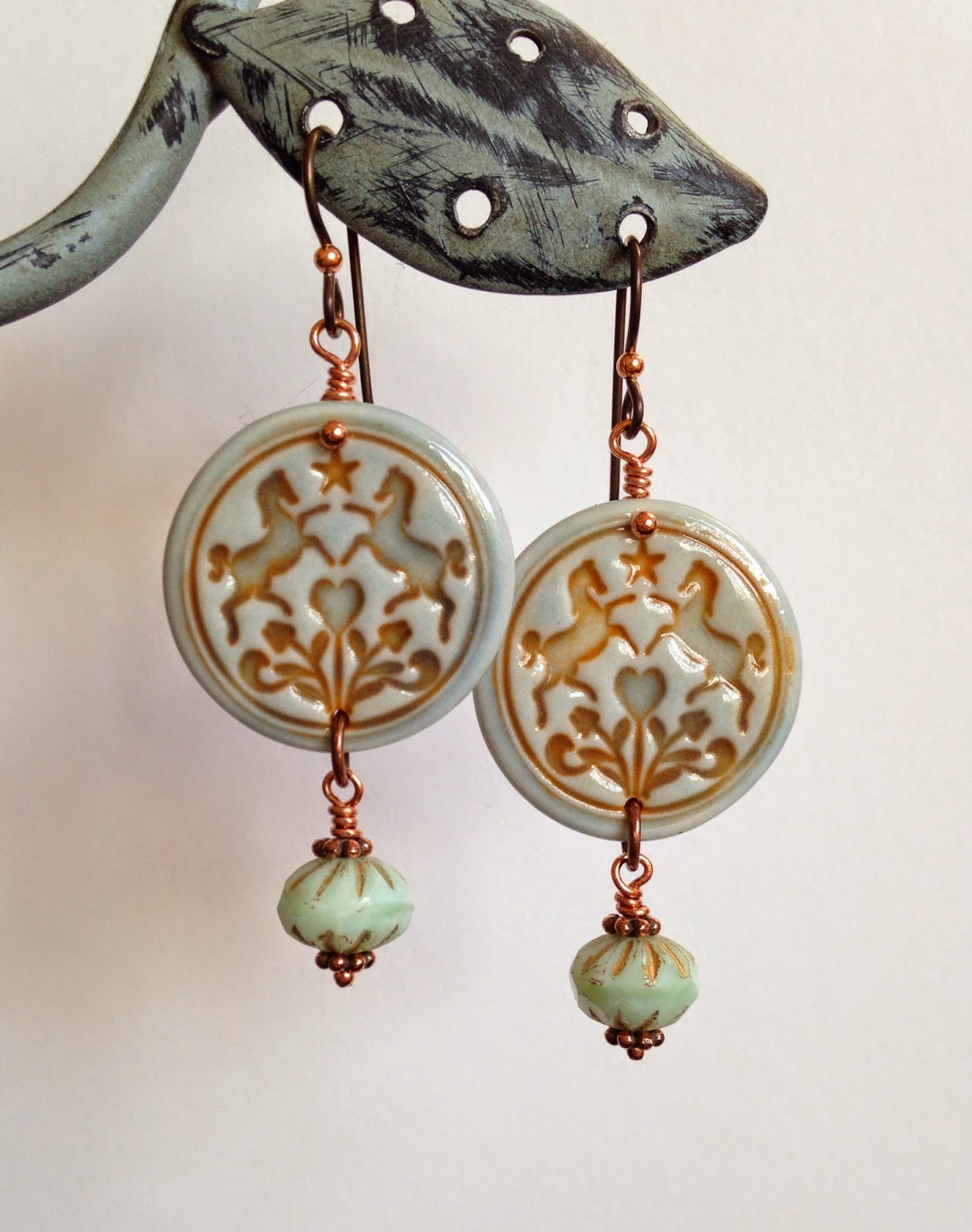 But wait, there's more!  This is a blog hop.  If you want to see what Home inspired everyone else to make, pop over to Andrew Thornton's blog HERE.

If you're interested in these earrings, they should be heading to Unearthed Arts in the next few days.

Posted by Sarajo Wentling at 8:21 AM

Email ThisBlogThis!Share to TwitterShare to FacebookShare to Pinterest
Labels: Inspired by Reading Book Club, Round Rabbit