An Object of Beauty: Inspired by Reading Book Club

The Inspired by Reading Book Club continues to be one of my favorite monthly challenges.  It's so nice to actually read some adult books and to go out of my comfort zone of genre fiction.  The May selection for the club was An Object of Beauty by Steve Martin.  To me, and I'm guessing many others, Steve Martin lives in my mind as a brilliant comedian... not a novelist.  Reading this book changed my perception... he's an accomplished novelist in his own right. 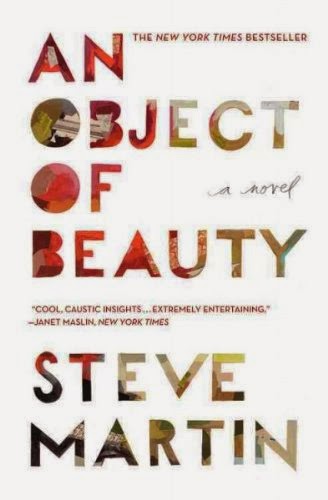 I'll be the first to admit that I know almost nothing about the art world or the business of art galleries and collecting.  After reading this novel which chronicles the rise and fall of one ambitious young woman, Lacey Yeager, in the New York art world, I feel like I know a little more...and possibly more than I wanted to!

One of the things that I really appreciated about this novel was that he included full color prints of many pieces of artwork mentioned.  As someone without any real art history background, it was nice to actually get to see what was being talked about.

Naturally, it was one of the images that ended up giving me my inspiration for my creation this month.  Specifically it was Flowers by Andy Warhol.  I tried to find an image of the same one that was in the book (which had bright blue, red, yellow, and yellow orange flowers) but I was unsuccessful in finding a decent image of that one... so I just "borrowed" the version that Andrew pinned to our Pinterest board instead.  In looking for the "right" one, I did discover that Warhol had a whole rainbow of flower colors which opened up the doors for me to design with pretty much whatever colors I wanted!
I chose this piece as a jumping off point not just because it was colorful and approachable (although that certainly was part of it!) but the picture played a pivotal role in Lacey's story.  It was one of the first major art purchases she made and a belonging she sold to finance her rise in the art world.  I felt badly for her that she sold it... but I suspect that I was more sentimental about it than Lacey ever could be!

Once again being pressed for time (May was supposed to be my "down" month and a chance to catch my breath... but not so much) I decided to go for something pretty simple and straightforward.  I know that many of my book club members will come up with much more amazing, complex, and thoughtful creations, but I'm just happy to have made something to be able to participate!

I decided on a simple long charm style necklace that featured some of my brightly colored Czech glass flowers.  I went with Vintaj Arte Metal to play of the dark background of Warhol's work and to give a nice contrast to the vibrant colors of the flowers.  I ended up just making a cluster of flowers and hanging them from a filigree piece on a long chain. 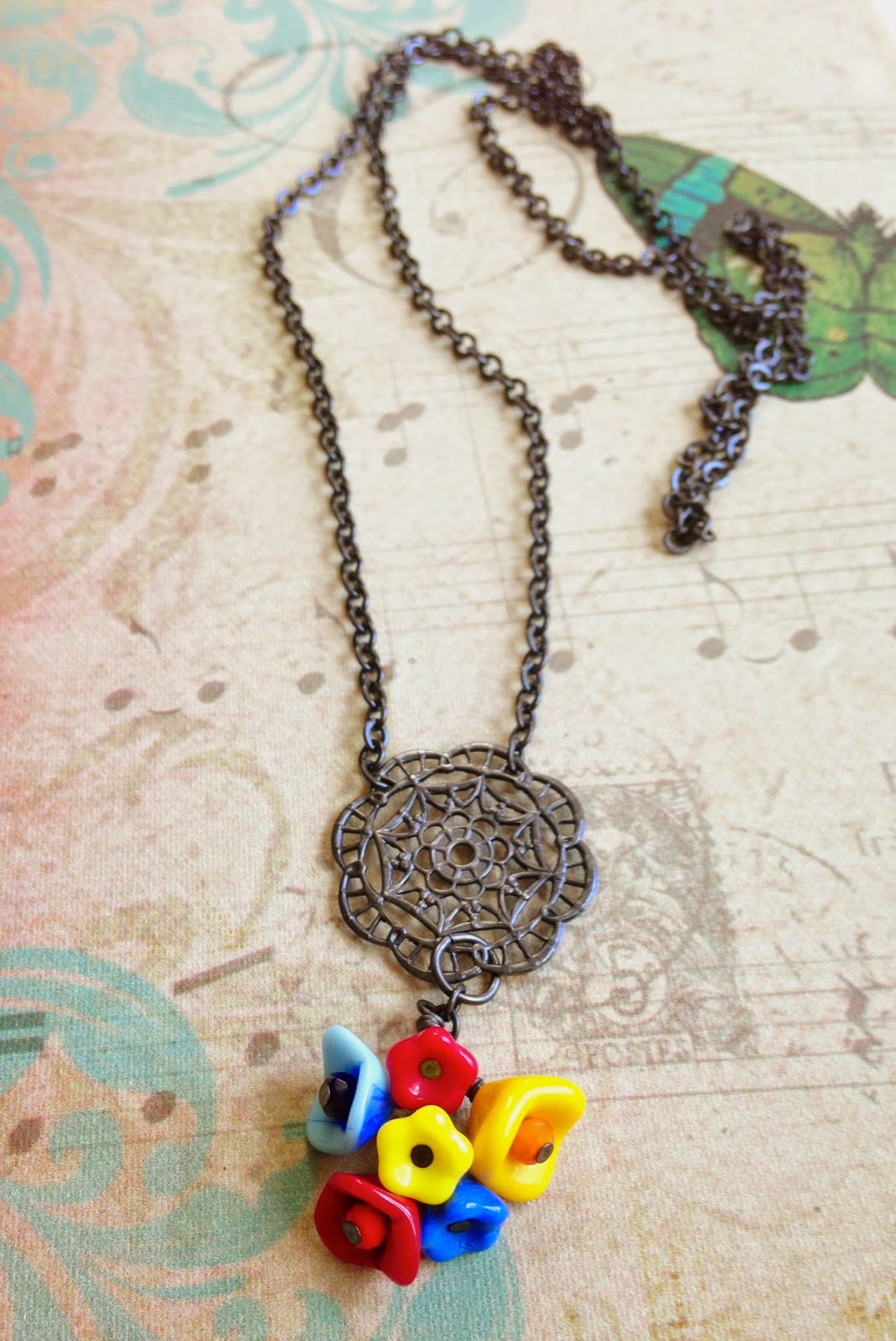 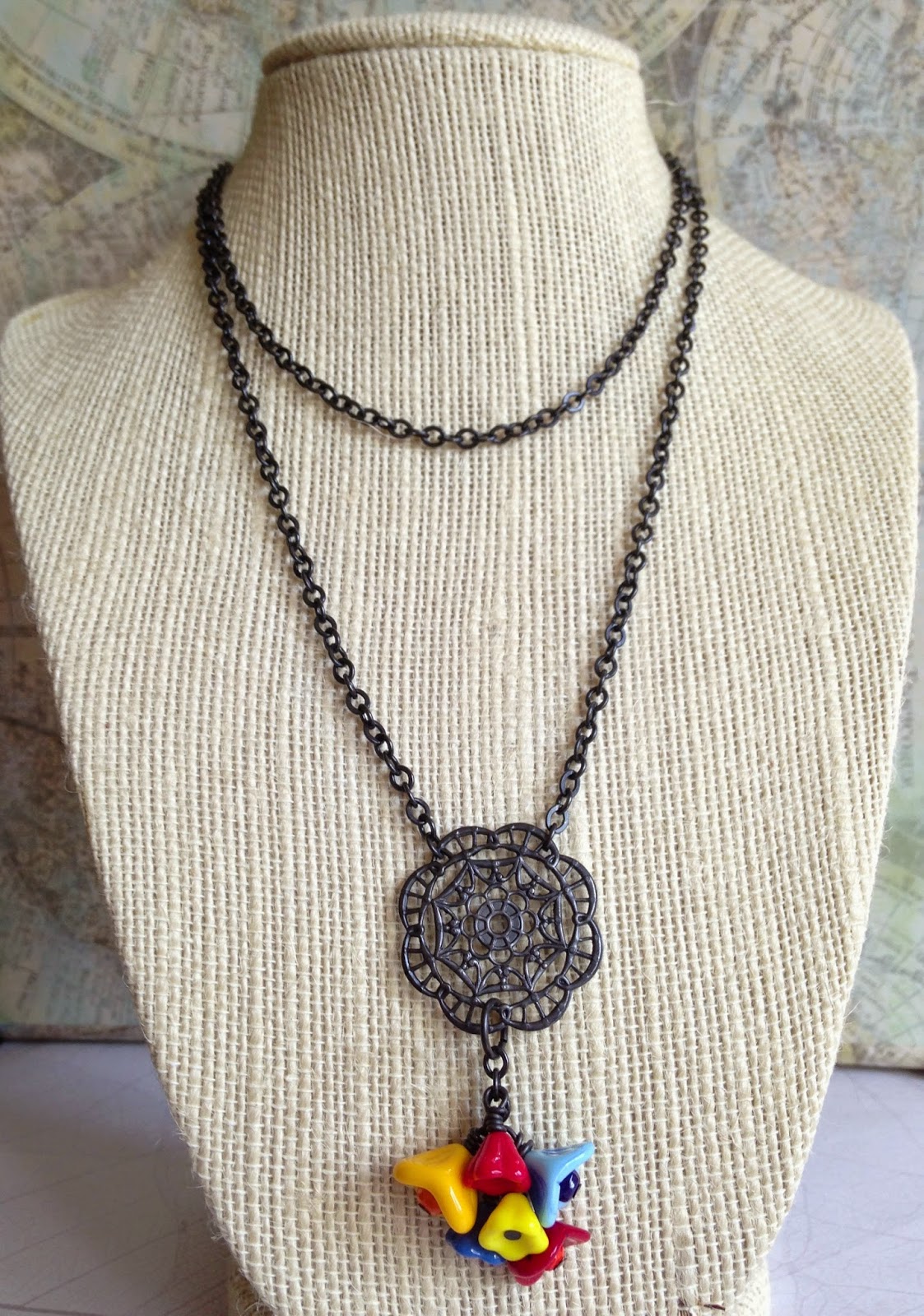 I may yet play with how the cluster of flowers is put together or possibly add one more at the top.  I'll have to see how it moves when worn to decide.

This is a blog hop.  You'll find the full list of participants over on Andrew Thornton's blog HERE.

Posted by Sarajo Wentling at 8:09 AM