Inspired by Reading: Catching Up

I've been doing pretty well keeping up with the reading for the Inspired by Reading Book Club the last couple of months and even had ideas rolling around in my brain... sadly I just didn't get around to actually making anything.  This post will be a quick catch up for September and October's selections!

For September we read The Immortalists by Chloe Benjamin.  I wasn't really sure what to expect from this one, but the idea of knowing your death date and how that might influence one's life was intriguing.  I'm still not totally sure how I feel about this book... I'm not sure it's one I'd readily recommend.  I think part of it is that I didn't find the characters particularly likable overall.  They were all very flawed individuals which I suppose is the human experience.  I have to wonder if knowing their supposed death dates led the siblings to make some of the decisions that they did.  What I wonder is would their lives had been different and deaths different and at different times without that "knowledge"?  Each of the siblings seemed trapped in the knowledge of their own individual expiration date. 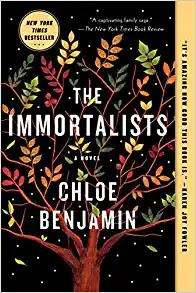 For my creation, what stuck out to me was the phrase "thoughts have wings."  It comes up in Daniel's story and, if I'm not mistaken again in Varya's.  I honestly can't say why that is what rose to the top, but that's just how the mind and creative process work sometimes!  I decided to stamp the phrase on an Arte Metal blank from which I intended to hang a wing shape that I had painted in silver.  It didn't feel hefty enough at that point so I decided to add another layer behind the original blank.  This time I used a texturing hammer and then highlighted the surface of the blank to get more of a gunmetal grey color.  It's hard to see in the picture but I used some little metal beads between the two blanks when I riveted them to give a more three dimensional effect to the pendant.  Physically, it was still pretty light in weight and I worried it wouldn't hang properly so I added a beaded segment with a chunky rock crystal and Czech glass before hanging the whole thing from a long length of silver plated chain. 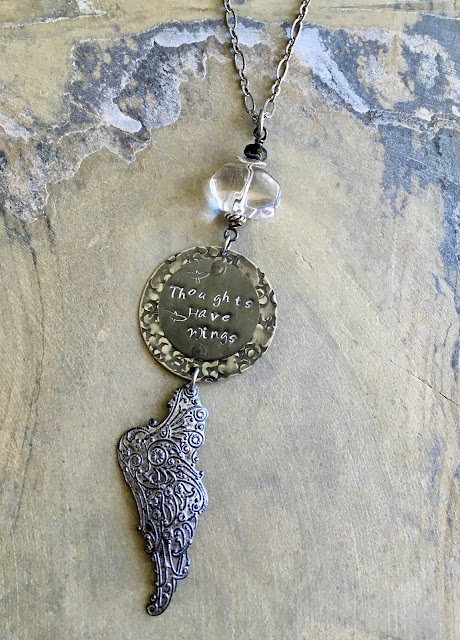 October's book was the suitably otherworldly Neverwhere by Neil Gaiman.  It really seems like I should have read this one ages ago but, alas, I was late to the party.  Eric made me watch the BBC mini-series ages ago but I honestly remember very little about it.  So little in fact, that I wonder if I slept through a good portion of it!  Better late than never I guess!  I read this one so quickly... it was a a captivating urban fantasy built on the premise that there is a world literally and figuratively underneath the one we know... or at leas underneath the London we know.  Poor, painfully normal, dull Richard Mayhew gets sucked into the dealing of London Below and his life will never be the same. 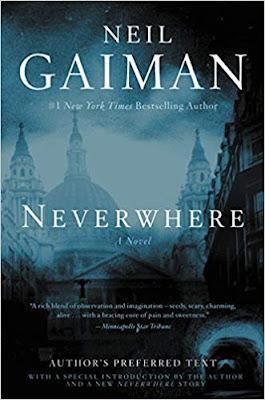 Full disclosure, the earrings I made for this month were originally meant to be part of my October Honey Do List reveal (you can see that HERE if you missed it) but I didn't finish them in time.  As I was painting them (and the coordinating bracelet) I was thinking about the character of Old Bailey and his rooftop roost with all of his birds.  These asymmetrical feather earrings are a design I've done before but always in brighter colors. 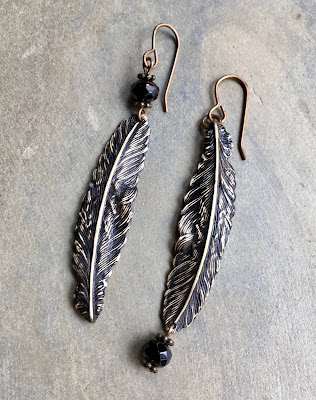 I've already made a decent dent in November's book club selection, so I have high hopes to participate next month as well.  For now, it's back to the bead table as soon as I can extricate myself from the sweet purring kitty hanging out in my lap!

Posted by Sarajo Wentling at 11:11 AM