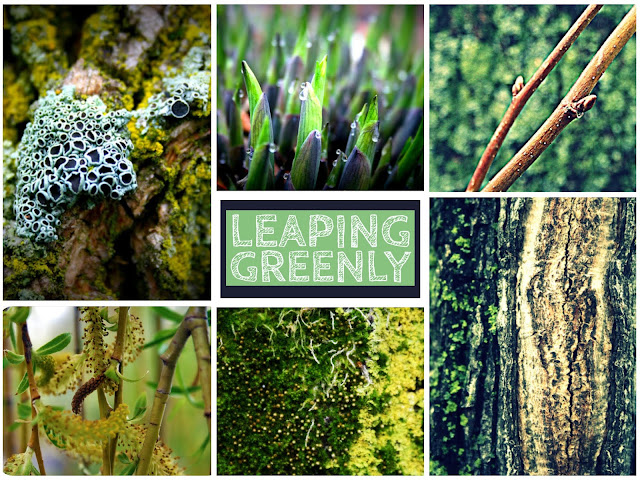 OMG.  I need the snow to stop already!  We've had more plans delayed or ruined by weather this winter than the last 4 winters combined.  Like so many others, I'm just done with snow, sleet, ice, and crazy cold weather... I'm over it all!  Erin, our fearless leader for this challenge, is in the same boat and has chosen greenery as the theme for this month's We're All Ears challenge.  Here's hoping we actually see some green (or al lest less white!) in the next month or so.  For now, I'll make do with some new earring designs!

I had fun pulling out tons of great green beads for this challenge.  I have to admit that I didn't necessarily think about the specific images that Erin shared, but more the color green in general.  I am super excited about the thought of little green leaves eventually budding... I'm sure it will happen someday... maybe by May??

These first two designs feature some goodies that I had picked out from some Allegory Gallery kits and such when I was putting things away earlier in the year.  (Whenever I'm digging through a mix or kit I like to grab out matching pairs and set them aside for later use!)  I loved the little pale green leaf charms... I'm pretty sure that they are vintage.  I was making room for some new beads and had emptied some millefiori glass out of a container and noticed two little green and yellow coins.  Turns out that they worked nicely with the leaves and some other little Czech glass beads I already had pulled out.  For the second pair I had the funky bright green beads set aside and added in some green crystals from another kit as well as little Czech glass rondelles.  The longer brass ear wires from Vintaj make for a nice dangle! 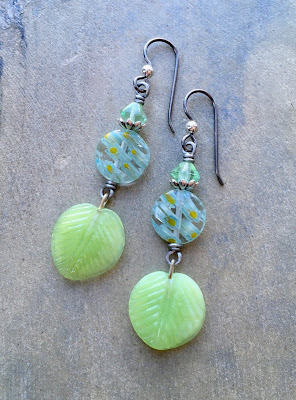 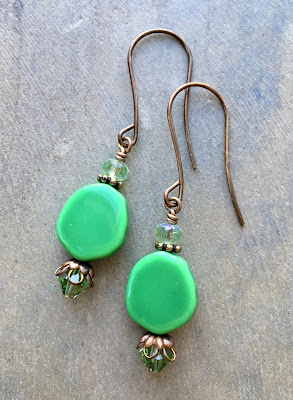 Next I dug into my art beads!  Some sweet leaf charms from Michelle McCarthy of Firefly Design Studio called out to me.  Turns out that they were a nice match for some brand new green Apatite that I picked up from Dakota Stones at the recent Twin Cities Bead Bazaar.  It took me a few tries to get the wire wraps where I was happy with them.  I had to give up on making the wire loops to go through the charms... it just wasn't playing nice. 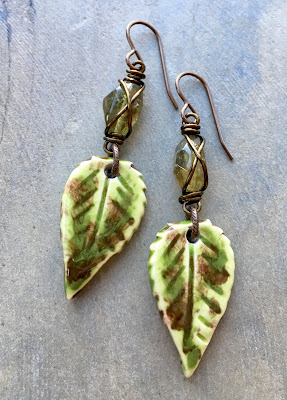 This next pair is going to play double duty and make an appearance in my next post for the Art Bead Scene... consider this your sneak peek!  The amazing green and black charms are from Lesley Watt and have a wonderful crackle finish.  I hid the loops on the charms with brass bead caps and then added some fun polymer clay disc beads from Heather Powers of Humblebeads and Czech glass. 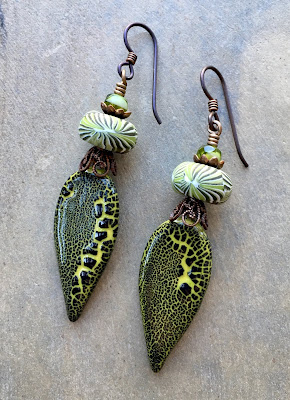 Last but not least, I decided it was time to finally make something with these adorable vine covered rounds by Heather Powers.  I paired them with copper wire and some pale green Czech glass beads.  I initially thought I'd have the flower beads on the top, but then I flipped it around and liked it even more that way!  These were the hardest pair to photograph... the rounds really need to be hanging to see them properly.  (They're hanging from one of my parents' fine china plates that I've appropriated.) 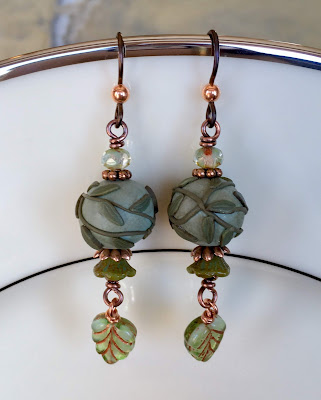 This is a blog hop... head on over to the Earrings Everyday blog to see what everyone else was inspired to make!

Posted by Sarajo Wentling at 5:34 AM