Inspired by Reading: Carry On

This month's selection for the Inspired by Reading Book Club was Carry On by Rainbow Rowell.  I know Rainbow Rowell for her contemporary young adult books (and also as the cousin of the now retired Jade Scott!) so I assumed that this was along those lines.  Wrong!  That's what I get for never reading the descriptions or jacket blurbs for book club books I guess.  I learned after I finished it that Carry On is connected to Rowell's first book, Fangirl.  Simon Snow is a fictional character that the protagonist in Fangirl is obsessed with... Rowell wanted to flesh that world out and thus wrote Carry On (and it's sequel out this fall.)  I'm going to have to go back and read that one! 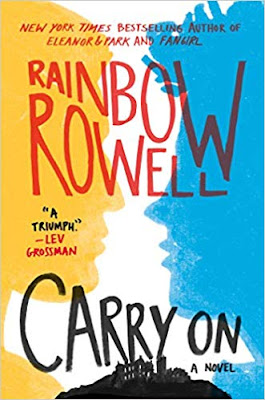 To me, this book felt like a mash up of the Harry Potter series and The Magicians by Lev Grossman aimed at an upper YA audience.  It is set at a British magical academy, Watford, that is kept apart from the Normal world where young magicians learn the skills/spells they will need.  Simon, the main character is an orphan who has become the unofficial heir to the the Mage, the headmaster of the school and the leader of the magical world.  He's also the first student of apparently "Normal" background to gain admittance to Watford.  His roommate and nemesis is Baz, who happens to be both a magician and a vampire.  The big bad in the novel is the magic eating Humdrum... who just happens to look just like an 11 year old version of Simon.  That's the basic set up... I won't spoil the rest of it.

Some books are just harder for me to find some sort of jumping off point for creativity.  This was one of those books.  The only thing that kept sticking in my brain was the chapter when the dragon attacked Watford... specifically, Baz casting "Ladybird, ladybird, fly away home."  I thought it was somewhat endearing that it is Baz, the self-professed villain in the story who understands that the dragon doesn't want to be there attacking the school and that killing it unnecessarily would be cruel and dark.  So between that and a somewhat desperate need for spring and warmer weather (seriously, the Polar Vortex struggle is real), I went with ladybugs and brights for this month's creations.

I had a ladybug and daisy flower covered ceramic lentil bead from Golem Design Studio as well as a coordinating pendant.  Perfect!  I started with the lentil and worked it into a multi-strand bracelet in the style of a tutorial by Lorelie Eurto.  I used tons of Czech glass including some adorable ladybug beads plus pewter, crystal, and seed beads for the strands. 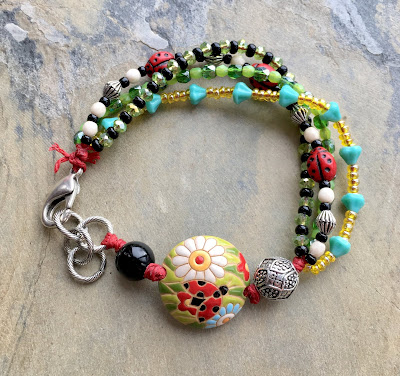 For the necklace, I had fun pulling together different flower beads to pull out the colors from the pendant.  The flowers and little ladybug beads pop against the background of green Czech glass just like the designs do on the pendant. 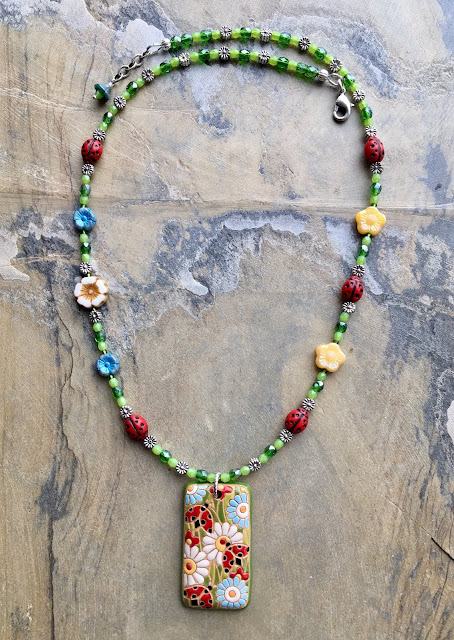 Not created for this challenge, but made this week... here's another piece that includes some of those fun ladybug beads!  This charm bracelet was a special order for a friend.  The charms belonged to her late sister and she asked me to make something for her with them.  Voila!  The gardening themed charms called out for bright flowers and leaves... and, of course, ladybugs. 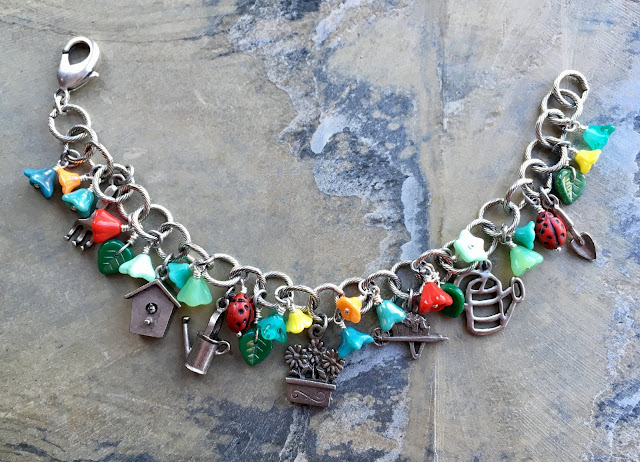 I'm really hoping that these bright pieces will help me ward off the next few rounds of snow we're expecting.  If this doesn't end soon, I may have to book a flight south to escape!!

Posted by Sarajo Wentling at 5:57 AM