Inspired by Reading: The Handmaid's Tale

I'm a little late to the book club party once again, but the October selection for the Inspired by Reading book club was the chilling (and not so terribly far-fetched) The Handmaid's Tale by Margaret Atwood.  This was a second read for me of this book.  Originally published in 1986, it's amazingly relevant today... perhaps even more so than when it was written.  I still haven't watched the Hulu series but will have to wait until it's out on DVD. 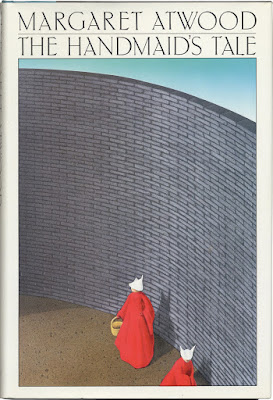 One of the things that I appreciate about Atwood's writing/storytelling in this book is that she made a very conscious effort not to include anything (technology, etc) that didn't exist in the real world.  (A good counterpoint is When She Woke by Hillary Jordan that has similar themes but non-existant technology like the ability to "brand" lawbreakers according to their crimes with skin pigmentation.  For instance, the main character has been found guilty of having an abortion and all of her skin has been turned bright red as part of her punishment.  It's a great book that you would probably enjoy if you liked this one.)

Anyway, Atwood has written a book that should have every person really questioning how tenuous our freedoms can be... how easily they could all be taken away, possibly without a fight or objection as a "temporary" measure for public safety.  For women, people of color, those who identify as GLBTQ this novel should be especially troubling.  For me the take away really is a reinforcement to question everything... and to speak up loudly to protect those liberties we hold dear.  If you watch the news at all you should be aware at how certain factions are attempting to roll back rights and liberties to certain groups and to sow seeds of discord to further divide us as a country.  If you aren't alarmed and outraged, you aren't paying attention.

Stepping down off my soapbox now and getting back to the creative task at hand.... As much as I was engrossed in the book, I struggled to figure out how to translate something from the story into jewelry.  At first all I could really wrap my head around was the red of the handmaids' uniforms but that was't really feeling all that fresh or inspired.

I kept coming back to a bracelet bar by my friend Erin Prais-Hintz of Tesori Trovati that I've had for a while.  Yes, I do realize that I went with something red, but it wasn't just the color that got my gears going.  I appreciated the message on the focal too... "Follow Your Path."  Offred had to follow her own path... figure out how to survive, how to navigate the strange and perilous circumstances that she found herself in under the new world order in what once was the United States.  She had to be brave and resilient... but she also had to be vulnerable and put her trust in others without truly knowing the wisdom of such trust. 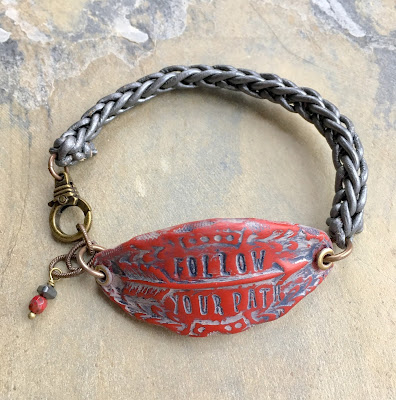 I chose the pewter colored leather for the braiding that I did using my new lucet from Mr. Humblebeads.  It went nicely with the bracelet bar but also made me think of the wall on the book's cover.  A small detail that the picture doesn't really capture is the little beaded dangle.  I used a Picasso finished Czech glass bead that coordinates with the focal, but also a triangular piece of plated hematite.  I liked the triangle for the seriously weird trinity between Offred, the Commander, and the Commander's wife.  I originally had planned to work a polymer clay bead that I made and/or some English Cut Czech glass into the design, but my braid was long enough that I decided to just keep it very simple.

Thanks for stopping by my blog to read my ramblings and to see what I've been making!

Posted by Sarajo Wentling at 1:01 PM