I want to start off this post by saying that I'm an extremely lucky woman to have a husband who is my biggest cheerleader and supporter.  Eric has always had more faith in my talent and skills than I probably ever will and for that I'm so very grateful.  I love that he is interested in what I'm making or experimenting with and is always good for an opinion when I get stuck.  He's also the one who pushed me to make the leap to creating jewelry full time!

Well, apparently he's no longer content to watch from the sidelines... he's been itching for a more direct role in what I make.  He's been threatening promising for more than a year to start coming up with monthly design challenges for me and it's finally happening this year!

Here's what Eric had to say about this first challenge:

For years I have watched Sarajo's growing skills in jewelry making.  I've seen her go from the excitement and nervousness of her first beading class, to selling her first piece in a local shop, to having her jewelry published in magazines.  Along the way I've hopefully encouraged her to embrace her hobby/career.  However, I've been plotting along the way to get her try new things and step outside of her comfort zone.  I've thrown down the bejeweled gauntlet this year with a series of monthly challenges for my beloved wife--The Honey Do List!

The first challenge is a bit of a throwback.  In 2007, shortly after Sj started making jewelry, we visited the most magical place on Earth--yes, Disney World!  In the Germany pavilion at Epcot we closely observed a lampwork glass artisan crafting beautiful beads before our very eyes.  After striking up a conversation with the artist, my gregarious wife managed to get a look at her stash of beads and we bought several from her.  Most of these treasures have languished in the dark recesses of Sj's dragon's hoard for years.  I dug through them and pulled out this set as my first challenge.  Just do something--anything--with them!


When we bought these beads back in December 2007, I had just barely started beading.  I think I had taken just one class (maybe two) and had no skills to speak of... especially when it came to wire work!  I had made a few simple strung necklaces and some earrings that had just a basic loop and that was really it.  Knowing that I didn't yet have the talent to do much with them, nonetheless I bought a small collection of 6 or 7 focal beads and coordinating accent beads.  I felt a bit extravagant (after all, even the lampwork beads were at Disney prices) and unworthy of my beady treasure trove.  Over the years, I bought some other beads to possibly go with my Disney goodies, but have only made something with one of them so far... until now.  I'd like to think that my skills have developed at least a little bit in the last 8 years, maybe this challenge will inspire me to tackle the rest!

Initially the purple-grey tones in parts of the focal were kind of throwing me off... then I decided to ignore them!  I was thrilled to discover that I actually had the perfect gemstone beads to go with the mix of oranges and white in the main bead.  I picked out pairs faceted beads made of red agate with snow caps for the bulk of the beaded chain then added in tiny tangerine Czech glass rondelles to go in between.  I kept the focal pretty simple, just using a bead cap to the top and using a fancy copper head pin that I added patina to with liver of sulfur (making a mess in our kitchen in the process!). 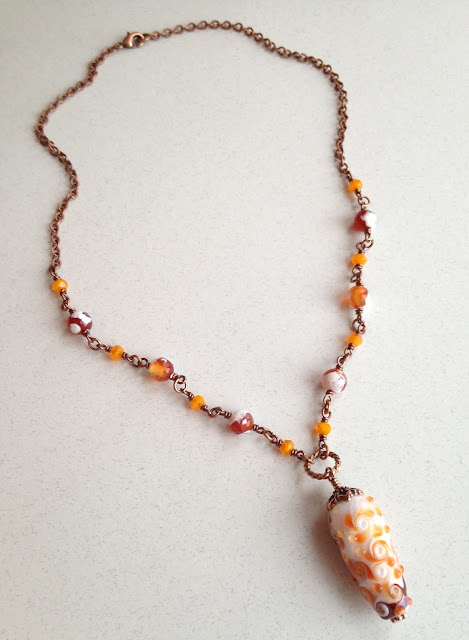 In retrospect, neither set of accent beads was really a perfect match for the pendant so I didn't try to make earrings to necessarily go with the necklace... although the colors certainly work well.  I had fun pairing one set of lampwork beads with some swirly copper plated bead caps that remind me of the movement in the focal.  I also made good use of some vintage glass teardrops that I got from one of Andrew Thornton's destash events. 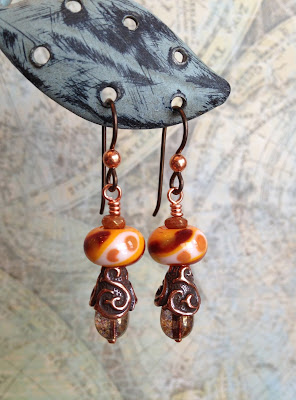 I actually had two sets of accent beads to go with the focal but I got too excited and whipped up a pair of earrings before snapping a shot of the whole set.  Oops!  Here's what I made with that extra pair.  I used more of the red agate with snow caps here paired with some other copper and copper plated findings. 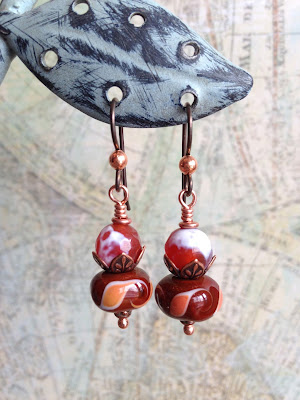 Thanks for visiting!  Stop back next time to see what Eric adds to the Honey Do list for February!

Posted by Sarajo Wentling at 1:10 PM