We have two book club reveals this month.  You can find my post for Miss Peregrine's Home for Peculiar Children HERE.

The November selection for the Inspired by Reading Book Club was Serena by Ron Rash.  Set in 1930s North Carolina, the novel tells the story of newlywed couple Serena and George Pemberton and their timber business. 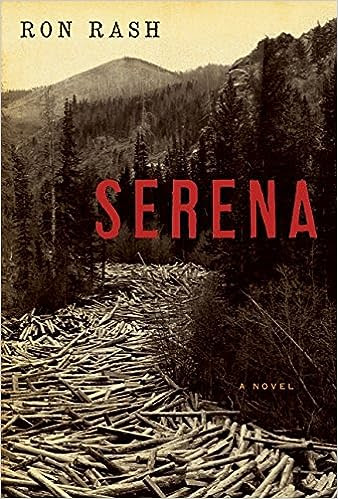 I went into this book with no knowledge of it whatsoever.  I'd never heard of the book despite the fact that it's also been made into a movie with Bradley Cooper and Jennifer Lawrence.  I think I was expecting some sort of sweeping historical romance set in the Appalachian mountains.  Boy was I wrong!  This book, like the titular character, was twisty and dark.  I was really not expecting such a high body count!

Serena is not like any woman that anyone in the book had ever met.  She's got a single mindedness about making the most profit from their logging business regardless of the consequences for others or the land.  She shows herself to be beyond ruthless, eliminating anyone who gets in the way of her plans.  Many of the characters in the book bend to Serena's will and either willingly do her bidding or at least try to stay safely out of her way.  Really the only likable characters in the whole book are Rachel and the few characters who try to help her.  Rachel is the young girl who mothers Pemberton's illegitimate son and is left to raise him on her own after Pemberton kills her father at the beginning of the story.

Since the logging industry and its devastating effect on the land is a central part of the book, I chose a pendant from Melanie Brooks of Earthenwood Studio that's in a pattern called "lumber leaf."  I used a variety of Czech glass rondelles in shades of green and brown as well as a few little leaf beads.  It was a no brainer to make use of some of my wood beads too.  It's a little hard to see but the clasp is a twig toggle set, continuing the woodland theme. 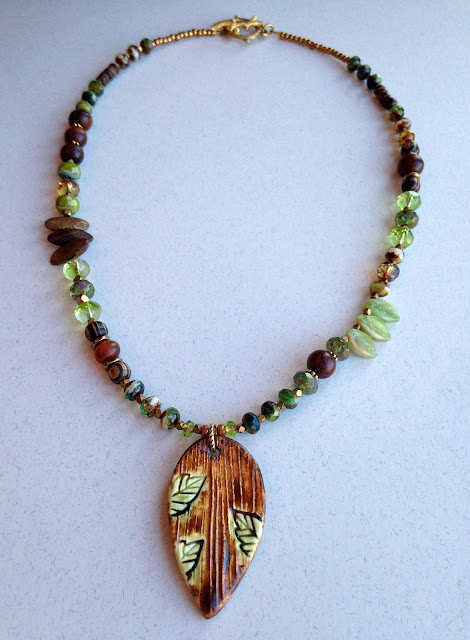 Pop on over to Andrew Thornton's blog HERE to see what everyone else made!

Posted by Sarajo Wentling at 7:26 AM