Ever since I saw Linda Landig's post over on the Art Jewelry Elements blog a while back, I've been lusting after the idea of an antique printers cabinet for bead storage.  You can see her post HERE to understand my new obsession.  While I don't have room for such a thing in our basement where my main beading workspace is, we've been talking about redoing our upstairs office as a studio for me.  Ok, if I found such a printer's cabinet I'd totally find a way to make room for it, but for now, something in a more modest size probably makes more sense.

Lucky me, I stumbled upon quite a find on a trip to Duluth, Minnesota with my husband back in July.  I really have to thank him since we were just killing time between lunch and the beer festival that brought us up there and he suggested popping into an antique store we passed.  And that's where I saw this: 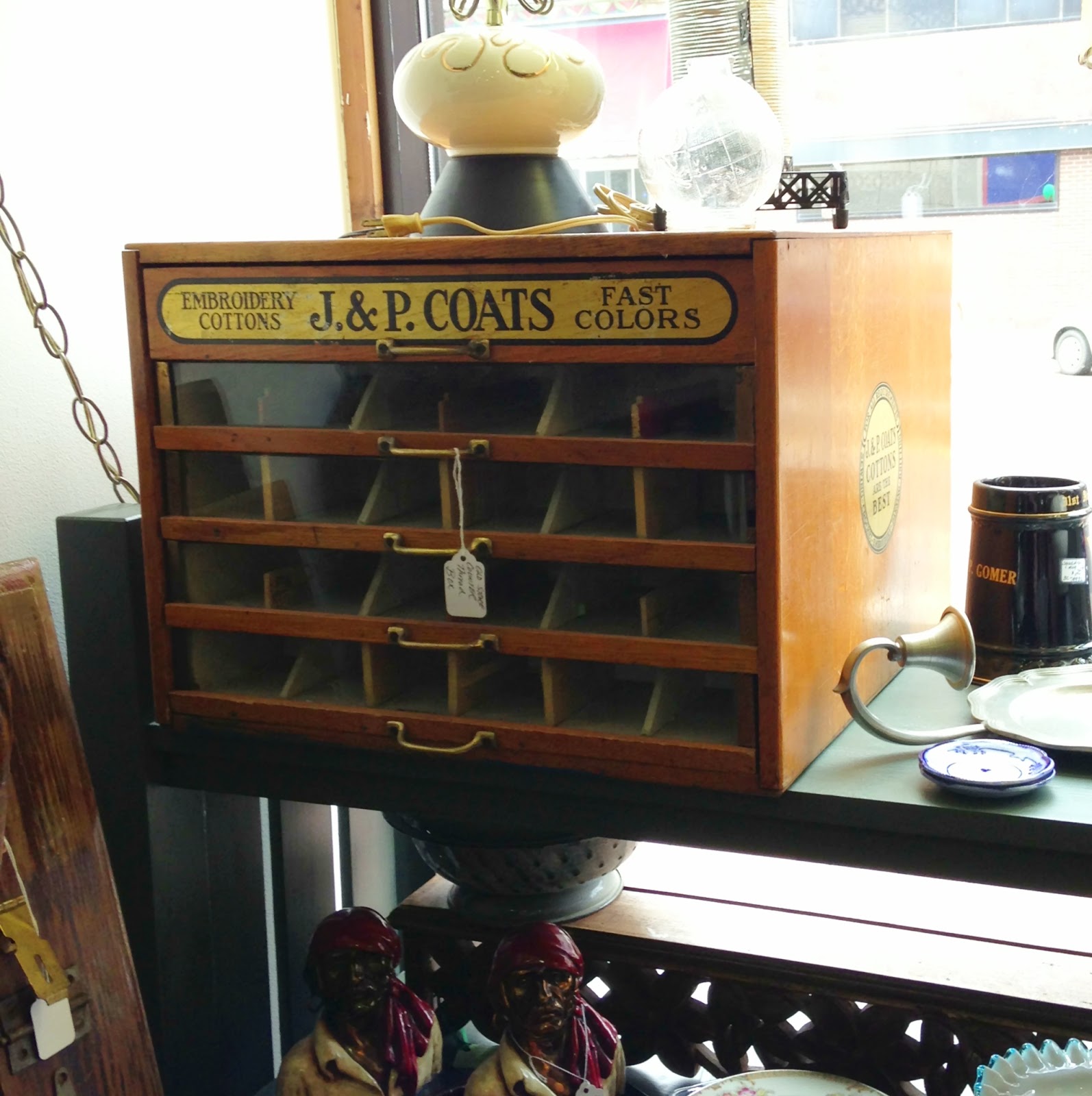 It's a old counter display for J&P Coats embroidery floss.  Back in my short-lived cross stitching days, I had plenty of Coats and Clark floss (they merged in the 1950's) so it felt a little nostalgic for me.  Near as I can determine, it's from the 1920's or 30's and is in relatively good shape all things considered.  I'm proud of myself for asking the shop clerk if they could do better than the listed price and was rewarded by getting the thing for $95 less than it was listed for (and more than $100 less than some I saw online after a little digging... score!).

Anyway, we picked up my new treasure on our way out of town and I started plotting the mostly cosmetic work that would make it my fabulous new art bead storage unit.  Here are a few more "before" pictures: 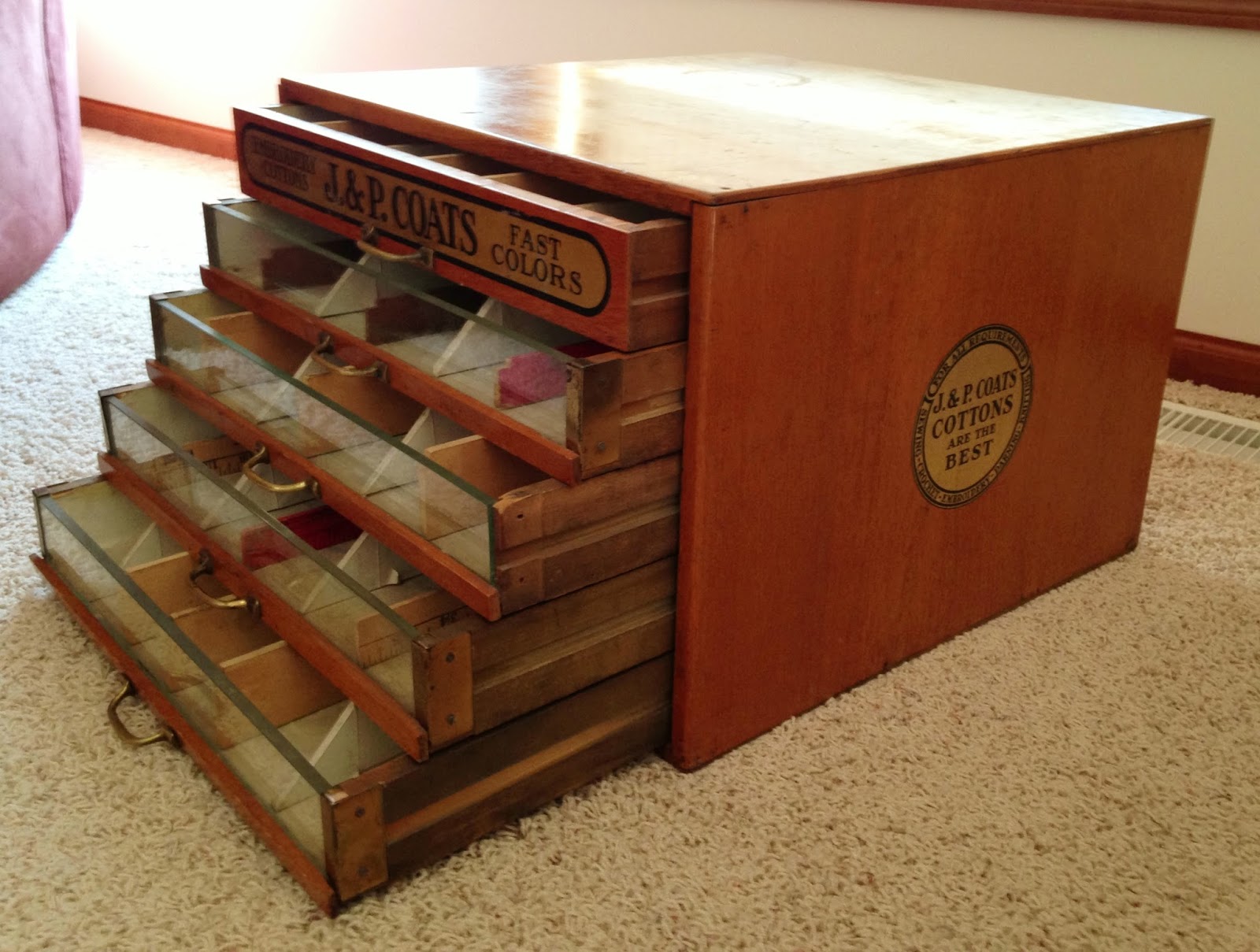 Someone over on the Creative Bead Chat Facebook group gave me the fabulous idea of looking for velvet textured scrapbooking or contact paper.  I had no idea such a thing even existed!  (If I'm totally honest, I'm one of the least crafty people I know.  That probably sounds strange since I make jewelry, but there it is.)  Anyway, I trotted myself down to the big Archivers scrapbooking store at the mall and asked them if they had this magical substance.  I was thrilled that they actually had tons of different colors.

I struggled between a lighter mushroomy taupe, a dark grey, and a lovely green for a while.  I kept weighing the merits of a more neutral backdrop for my beads versus a color that I adore.  In the end, my heart won out and I went home with a bag full of green fuzzy paper and some heavy duty double stick tape.  Now if I could just find the time to get the inside all prepped and ready!

The insides of the drawers were coated in some sort of paper that had been glued down at some point in its life.  I seriously underestimated the amount of effort that would go into getting back down to the wood!  I tried a few different things with little success including a misguided attempt to sand them by hand.  Thank goodness for our friend Marty who lent me his little orbital sander and taught me how to use it!  I eventually learned that trying to peel up as much of the paper as possible before sanding was the best route.

After getting it all sanded down as best I could, it still took me a while to find the time to clean all the sawdust out of the drawers and get the paper stuck down in each one.  The scrapbook paper isn't big enough to cover the whole drawer so I had to cut and piece things together.  It's not perfect, but I think it works pretty well.  Marty came to my rescue again by making me new dividers for the drawers since the ones that came with it weren't anything special (some were old rulers that someone cut to fit) and they were covered with more of that glued on paper, masking tape, and stickers... not worth the time trying to clean up!  He used some really cool white oak planks that had been salvaged from an old granary in Winona, MN.  The wood dates back to at least 1908 and has some wormwood that gives it great character. 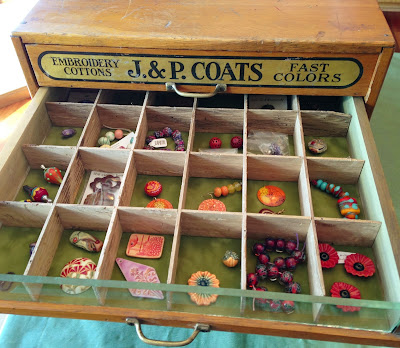 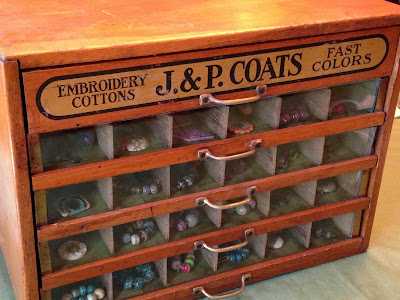 So, finally after more than half a year, I have a lovely new storage piece for my art beads.  Now to get down to business and get my beads all organized inside it!

Posted by Sarajo Wentling at 6:16 AM