This year, my husband Eric has decided to issue me a design challenge each month to get me out of my comfort zone and to help clear out my bead stash... we're calling it the Honey Do List.  I know that I'm not the only one who loves a good design challenge, so I'm inviting folks to play along! 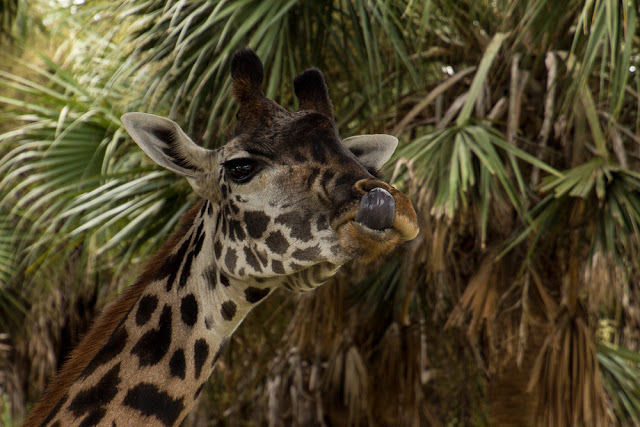 For this month's challenge I wanted to use a shot from our recent 15th anniversary trip to Disney World in Orlando.  As part of our trip we did the Wild Africa Trek in Animal Kingdom--a special tour that gets you even closer to the animals!  I have plenty of pictures of rhinos and hippos but they just weren't colorful enough for a jewelry making challenge.  Enter this photogenic giraffe who kept sticking his tongue out at us...

Eric's desire to get me to clean out my bead stash may have backfired this month!  I didn't have much that really screamed "giraffe" to me in my considerable bead hoard (although I did have one semi-formed idea surrounding some faceted caramel agate beads).  But when I went to a local bead show with a couple of girlfriends, I found the perfect Tibetan agate beads and I just had to have them!  (I also bought some of their other friends... have I mentioned that I'm a bead addict??) 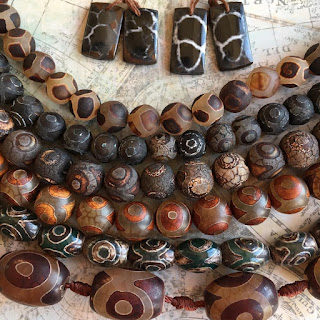 Part of me really wanted to make some sort of necklace with my newly acquired "giraffe" beads, but I couldn't figure out a suitable focal.  Instead, I decided to stick with my favorite thing to make... earrings!  I thought it would be fun to hammer some copper wire and then dangle the beads from the bottom.  I think I need a wee bit more practice with this technique!  I hammered two different sets and both curved more than I wanted them too, but I'm still happy with the overall results!  I added texture with my ball peen hammer and gave them a little patina with liver of sulphur.

My first attempts got way too thin at the ends but they really looked like long, spindly giraffe legs to me.  I found a way to still use them though.  I ended up riveting them to some long, skinny brass blanks and then wire wrapping the agate beads to the top.  These will probably have to find that special customer... but you never know! 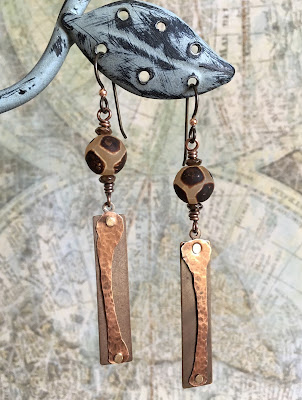 My second try was a little more even , but still too much curve to them.  At least they were pretty even so they worked for my original vision.  This time, I was slightly thwarted because the scale of the Tibetan agate and the hammered copper just wasn't quite right.  No problem though... remember those agate beads from my stash that I mentioned earlier?  They ended up being just the right size. 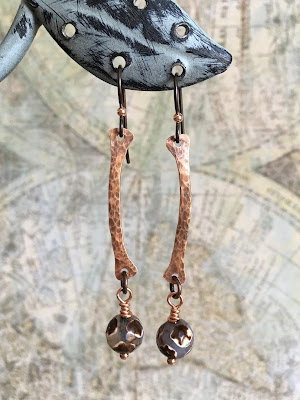 In addition to the fun agate beads, I also scored a couple of pairs of matched Septarian pieces that had a giraffe-esque feel to them.  Even though I waited until the last minute to start making my Honey Do List projects, I was determined to use these stones since I bought them specifically for this purpose.  (Plus, I didn't want to have to put them properly away if I didn't get them finished!  The truth comes out!) 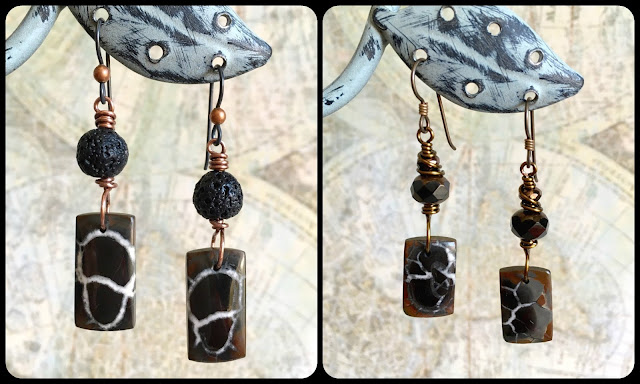 
get the InLinkz code


Posted by Sarajo Wentling at 8:27 AM